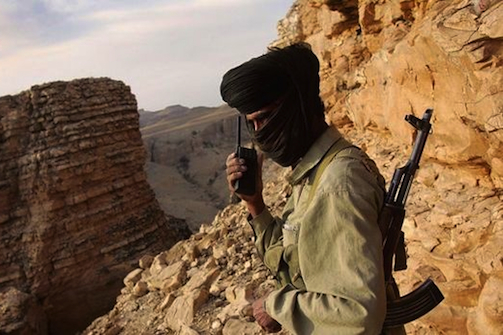 This article published in the International Policy Digest shows how some sections of Baloch nationalist groups in Iran and Balochistan are intertwined with Deobandi and Salafi-Wahhabi terrorist outfits.

“Extremist groups who made headlines in the past months include Harkat ul-Ansar (HAI) and Jaish al-Adl. The latter merged with Abdolmalek Rigi’s Sunni Deobandi Balochi group, Jundallah, in 2010, after their leader’s execution by the Iranian government. The group now operates under the name Jaish al-Adl….According to an announcement made by Harkat ul-Ansar in December 2012, HAI also has ties with Sipah-e-Sahaba Iran (SSI), a  Sunni (Deobandi) group with links to a Pakistani group, Sipah-e-Sahaba Pakistan.”

Previous reports on the links between Deobandi ASWJ-LeJ-TTP terrorists and Baloch separatists can be reviewed here: https://lubpak.com/archives/tag/takfiri-deobandis-of-balochistan

HAI’s spokesperson, a Baloch who has gone through formal classical Arabic training has made an appearance on Saudi al Wesal TV calling on Sunnis (Deobandis and Salafis/Wahabis) to support the group by sending arms. His messages are geared towards Balochs and encourage them rise up against the Iranian regime with the support of their Sunni/Deobandi and Wahhabi friends. If successful it could be the beginning of a new field for Jihad.

Jaish al Adl has also called on Sunnis (Deobandis/Salafis) to provide assistance but unlike HAI is not particularly drawing Sistan-Balochistan into a new jihadi field. If HAI is successful in turning Balochistan into a new jihadi field there could be serious implications for Iran and Pakistan who are already experiencing tensions over their borders. In fact, the spill over effect would also impact Afghanistan’s Balochistan region.