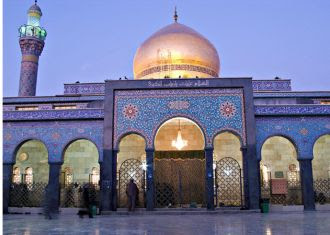 First it was the wicked Wahhabi government of Saudi Arabia, that decided quite recently, to furnish Antiaircraft Missiles to the so-called Syrian rebels so that a few more hundred or thousand innocent lives will be lost, and  most likely it will have no impact on a very formidable Syrian regime’s war machine. Now it is the turn of the  venomous Saudi Clergy which is equally cruel and criminal in their acts, it has been perpetrating from the onset of Syrian uprising. As a matter of record, during March, 2011, it was Saudi clergy as well as its religious foundations that raised the temperature of Syrian crisis by initiating the recruitment and deployment of Saudi and numerous foreign Jehadist fighters into Syria.

Many of us would recall as to how on February 23,2006, exactly eight years ago, in Sammarra, Iraq, the vicious and vindictive Wahhabi agents of Saudi Arabia financed, and collaborated with Iraqi Salafis in desecration of the holy Shrine of Hassan Askari (AS), the 11th Imam of Shia Athana Asharee Muslims. They abhor Shia faith and call Shia Muslims Kafir (Infidel) and Najis (Unclean). Their call for the destruction of holy shrine of Sayyedda Zaynab, therefore, is no surprise !

Amid an escalation of the terrorist attacks on citizens and government buildings in the Syrian capital Damascus, the extremist Wahhabi clerics in Saudi Arabia have called for the destruction of holy shrine of Lady Zaynab.
The shrine is located in the neighborhood of Sayyida Zainab, which has seen rise of violence and terrorist attacks over the past few days.
On Saturday, youths armed with sticks and knives, formed committees to protect the holy shrine of Lady Zainab, Press TV reported.
According to the Arabic website of Al-Alam TV, the move is designed to encourage sectarianism inside Syria and pave the way for a full-scale civil war in the country.
Lady Zainab is the daughter of first Imam Ali (PBUH) and granddaughter of the Prophet Muhammad (PBUH). She is regarded as a very noble figure by Shias around the world.
Syrian troops on Saturday regained control of most parts of the neighborhood after government forces launched an all-out offensive against the armed rebels across the capital.
Syria has been experiencing unrest since March 2011, with the Syrian government saying outlaws, saboteurs, and armed terrorists are the engine behind the violence.
http://pukhtunkhwatimes.blogspot.com/2012/07/saudi-wahhabis-call-for-destruction-of.html