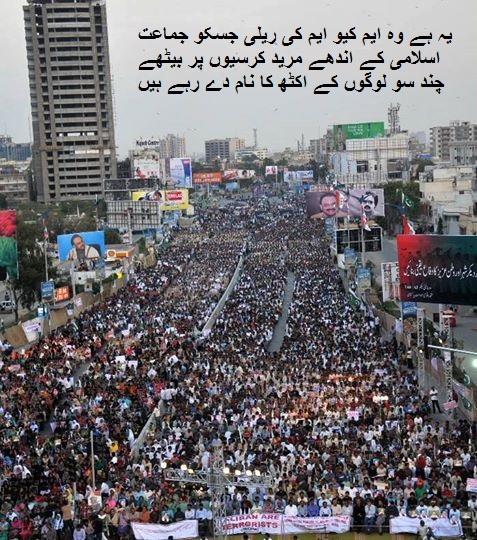 In her profuse variety Nature has brought forth creatures of all kinds; fish and fowl, animal and plant, insect and bacteria. Some creatures like the panda and the eagle are beautiful to behold. Others like the scorpion fish and the lizard are not. Some creatures are flesh eating. Others are herbivorous. Some other creatures like cockroaches, mosquitoes and maggots are parasitic. Each creature has its means of existence and survival and its means of perpetuating its species.

I am writing this as my mind turned to a unique parasitic predator, Jamat e Islami (the JI), when it termed the teeming anti-Taliban rally held today in Karachi as a flock of a few hundred people. Not surprising though, as the JI is a master of deceit. Its main commodity is deceit and lies on a massive scale. Having chosen to be a political parasite this characteristic is now so deeply and instinctively ingrained in its very nature that it knows by instinct what it must do to disfigure the truth. Another outstanding forte of the JI is the skilful manipulation of propaganda. 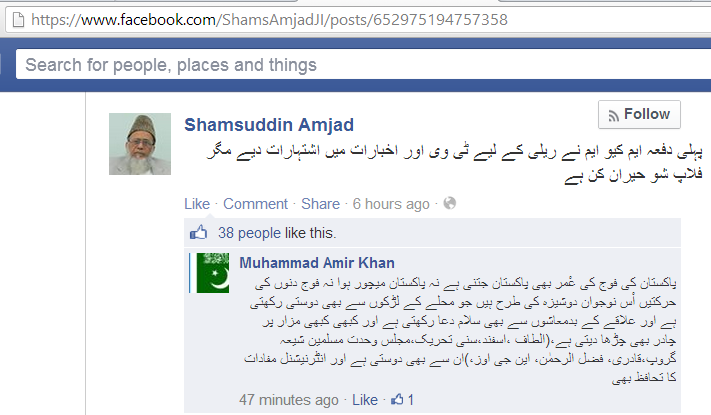 In the modern political history of the Subcontinent in general and Pakistan in particular, the JI stands out above all others in its treachery and its fierceness to survive. The JI was formed by Maudoodi as the first incarnation of organized militant Islamism in the Subcontinent. Since then it has survived through all the convulsions and upheavals of the subcontinent’s history. Having fiercely opposed the foundation of Pakistan, its founder had the cunning to migrate to the same country not long after it came into being. He had a far-reaching and all-encompassing program for the control, domination, and exploitation of his host country, for whose creation he nurtured a pathological hatred. The driving force of his whole politics prior to the creation of Pakistan was hatred for Pakistan’s founder. He always hated Jinnah with a terrible passion. He laboured diligently and skilfully to manipulate, confuse, and confound the minds of the new nation. He concentrated in placing the JI in control of the news media of the country, of its educational facilities, and of its undemocratic governments. He also adroitly used Yayha to coin an ideology of Pakistan that was far removed from Jinnah’s vision of Pakistan. Much earlier on, he had used Liaqat Ali Khan’s insecurity to engineer the passage of ‘Objectives Resolution’.

Whereas some of the autocrats –like Ayub, Yayha, Zia, and Musharaf- it conspired with- have all gone down the sinkhole of history — the JI has survived. Not only has it survived, but it has become the forebear of all the other militant Islamists in the Subcontinent, although it has always been insignificant in terms of electoral support. Having thrived in the lap of numerous dictators in the country, now the JI has thrown its lot in with the powerful Taliban. Unlike the Tablighi Jamaat and many other religious forces of his time, Maudoodi was not naive enough to put his efforts or beliefs centred in a hereafter. The JI has always aspired and contrived to exercise control. The JI instinctively decided far back in its early history that the best means of survival was to choose the role of a parasite on the bodies of other popular parties, the latest manifestation of which is its alliance with the PTI, no more than a maggot could fend for itself without devouring the body of its host. The PTI will learn this soon.

Whereas All India Muslim League was the builder and founder of Pakistan the JI had been opponent of Pakistan’s creation. It was the very antithesis of Pakistan’s idea. Throughout its history, the JI has been the parasite and predator on the backs of those political forces who have been beguiled into being its hosts. The JI has never been successful in garnering popular support but has always cunningly used the backdoors. It has been a destroyer of elected governments, a plunderer of democracy, and a killer who brought the Kalashnikovs and armed brigands into our educational institutions. Its founder, Maudoodi, once famously told Yayha that Yayha was ruling the country like the righteous caliph Ali Ibn Abi Talib. Then they armed themselves and went to abundantly kill and plunder in the East Pakistan. Its armed wings –Albadr and Alshams- killed hundreds of thousand innocent Bengalis in the then East Pakistan – man, woman, and child alike. It is a fascinating and horror-filled history. It is an ugly story. But study it we must, if we want to understand the JI.

However, with Maudoodi’s tenacity and zeal for preserving the JI, as embodied in his fanatic religious ideas, the JI did not go down with East Pakistan. No, on the contrary, it fed on the corpse and went from there to infect the incipient and growing democracy that was emerging in what was left of Pakistan. Hence the remaining Pakistan was blighted from the very beginning with the handicap of the ideology with which the JI had destroyed the original one.

Yes, indeed, the JI is a blood-thirsty tribe. And now they are looking to drink blood through the goblets of the Taliban. This is how the JI has always wielded significant influence over a long period of time despite being a largely unpopular and loathed element in popular politics. It has been a plague on the body of Pakistan from the earliest dawn of this hapless country. Nor has that plague abated in recent times. In fact, with The Taliban wind in its sails, today it is more deadly than ever. The JI has never been reconciled with the democracy in Pakistan, upon whose back it feeds. The JI bore into the host nation and whenever Pakistan slowly tried to pick itself up, the JI has like a cancer of extremism upon the body Pakistan. The untiring and current mission of the JI is to mongrelize Pakistan, and pump the extremism of Central Asia and Arabia into the veins Pakistanis. Its founder realized the tremendous potency of religion as a weapon — a weapon to either exercise control, or a weapon to disintegrate and destroy their enemies. He capitalized upon this knowledge to the hilt. In a masterful fashion, the JI has manipulated religion to its advantage with a devilish cunning that no other political force has managed. Maudoodi also learned one other significant fact early in his career, that he never will be so successful in garnering support for its ideology as in rallying people against someone branded as a common enemy. This strategy has worked wonders from Nazimuddin to Bhuttos, from the USSR to the USA, and from Hindus to Ahmedis.

Only if Maudoodi had chosen to stay back in India, what a blessing for Pakistan this would have been! Instead of extremism-ridden country, racked by anarchy and militancy, teeming with increasing floods of Islamist mongrels and Jihadists from all over, we would today have a beautiful country in a prosperous, productive, peaceful, orderly, and democratic Pakistan.