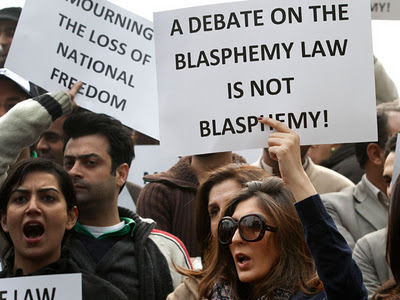 The various Muslim signatories, including Sadiq Khan, (report, 20 February) rightly condemn the imposition of the death penalty upon Mohammed Asghar on trumped-up charges of blasphemy. They conveniently focus on the execrable human rights perspectives of this appalling case but ignore its underlying theological dimensions.

What the Pakistani clerics and their Wahhabi-Deobandi paymasters must be told in no uncertain terms is that nowhere in the Holy Qur’an is there any scriptural foundation for blasphemy. The “crime” of blasphemy is an invented doctrine originating from a toxic fusion of questionable hadith (prophetic sayings of Muhammad) and perverse ecclesiastical opinion (ijmah). Neither of these secondary and often suspect sources can override the primacy of Islam’s divine text, which repeatedly says that Almighty God is exclusively responsible for everyone’s spiritual destiny. And not some over-zealous Pakistani court.

Therefore, leading British Muslims should be less pusillanimous and more proactive in exposing the twisted theology of a corrupt Pakistani religious fraternity, instead of only denouncing the ultimate legal sanction that now faces this poor elderly British citizen. It would be better and more effective to wage a combined human rights and theological campaign to secure the release of Mohammed Asghar, rather than just appealing to the good conscience of the Pakistani authorities to defer the death sentence.