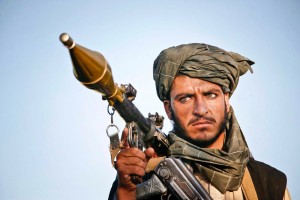 Who are these bearded men talking about the Pakistani constitution; about the Sharia(I never knew the TTP had prominent Islamic jurists or Deobandi scholars), these pre-modern Jihadi warriors talking about a post-modern world? Who are these strange men, deciding upon the future of a democratic, sovereign country behind closed doors? At this point, we would be naive not to accept that the state has failed to establish its writ and that the TTP, as a non state actor, has punched well above its weight. The Sharif Brothers are fearful of Punjab burning in the aftermath of any military operation and steps are being taken, as I write this, to beef up security and intelligence in the province. After all, the P in Pakistan, comes from, oh well, you get the picture.

Make no mistake, these talks with the TTP are taking place in the backdrop of the American withdrawal from Afghanistan. The prize is Afghanistan and the country is literally up for grabs, on account of the failure of the democratic project shepherded by the Americans( Karzai seriously?) and the weakness of the Afghan National Army, that despite American funding and training, remains unmotivated, weak and divided. The entire region, China, India, Iran, is keeping a close eye on developments and Pakistan with close historical linkages and intelligence ties to the Taliban, remains a crucial stakeholder. The worst care scenario, but which cannot be ruled out, is the breakout of a civil war (between the Pashtuns and the Northern Alliance) immediately after the American withdrawal, with different warlords fighting for control, and the Taliban finding their feet again midst the general chaos. Spare a thought for the people of Afghanistan who, caught up in the geo-political game, have suffered endlessly in the past few decades.

The Pakistan army continues to divides the Taliban into two groups; the good Taliban and the bad Taliban. As someone joked on Twitter, there are also the good bad Taliban(who can be tolerated in the short run for geo-strategic purposes) and the bad bad Taliban (those who attacks military headquarters and specifically target the army). The ‘bad-bad’ Taliban need to be exterminated but the logic of this thinking fails to impress me. The security establishment needs to make up its mind once and for all; are Taliban the good guys or are they, as Kayani said last year, the ‘internal enemy’ that needs to be dealt with accordingly?

The Khans and Munawar Hasans, and those who share a soft corner for the TTP, or owe it to their common Deobandi heritage, have stalled and defended and created confusion. In the lack of a political consensus, as is obvious to any observer, the army remains wary of launching a fully fledged onslaught against these militant elements, especially given how the backlash of such a military operation would/might fall on Punjab, the heartland of the army. If Punjab bleeds, the edifice of the country is shaken.

Civil society in Pakistan, comprised mostly of the English speaking liberal crowd, see no point in further talks with the Taliban, given the chequered history of such attempts in the past, and also because of the demand of the implementation of Sharia, which they see as irreconcilable with the principles laid out in the constitution and with existing global legal norms. Most of them would welcome a military operation if the blow-back of the attack does not directly affect them and their way of life. The elites in Pakistan, have been historically shamelessly self serving. Why care when those in Peshawar, those strange fellows, are going to bear the brunt of the TTP retaliation? In Punjabi parlance, ‘Sanu Ki’?

Allow me to digress a bit and discuss the idea of implementing Sharia law, since this seems to be the most pressing ideological difference between the two camps. All said and done, in relation to the Sharia, it becomes a matter of interpretation, that is to say, whose interpretation shall be accepted as the authentic version? This, of course, points to a larger conflict/ contradiction within Islamic societies today, which is the crisis of authority. The Ulema, who have traditionally seen themselves as the rightful interpreters of the Divine Word, have, as it were, not been able to keep pace with modernity and quite simply, do not posses the intellectual tools to survive in a globalized, democratic world. This is a glaring failure and is reflective of the intellectual stagnation that collectively ails the Islamic world.

There have been notable theorists in the Islamic tradition who have argued that the idea of a ‘modern Islamic state’ remains very much a fantasy; a concoction of the imagination, if you will; one scholar, in a recent publication, has likened this to the idea of an ‘impossible state’. Hamza Yusuf, a noted American Muslim scholar, has also maintained that historically Islamic states have been largely secular given the nature of governance, the performance of administrative duties that require ‘the best and the brightest’ for the purpose of the job. With that logic, for the purpose of constructing a road, it does not matter whether you are a Deobandi or a Barelvi or a Shia or a non-Muslim. Such distinctions erode and should erode when it comes to matters related to the day to day affairs of the state; matters that are, so to speak, related to administration and governance.

In essence, there are four major demands set forth by the TTP; the cessation of drone strikes(which again, is not in the hands of the government) release of TTP prisoners(estimated to be around 8000), financial compensation to victims in the Tribal Areas(which seems reasonable enough), and the withdrawal of the Pakistan army from the Swat region and adjoining areas(which is outrageous and tantamount to the state ceding sovereignty to a non state actor). Ideologically, both sides are light years apart, make no mistake and the TTP demand of the implementation of their own brand of Sharia is a non-starter, if there ever was one. However, it does seem, in light of positive news coming from the likes of Samiul Haq, that there is political will/resolve on both sides that some sort of agreement should be reached. And let me explain why.

Like I said before, the cake is Afghanistan, and Pakistan remains wary of the Afghan Taliban taking over Kabul, especially if they eventually join hands with the Pakistani Taliban and then launch attacks from across the border. The Pakistani security establishment not only wishes to avoid this nightmarish scenario but also wants to have a measure of control in Kabul. Ironically, even after the American withdrawal, it seems the case that Afghanistan shall continue to be a proxy battleground between and among regional powers. The current emphasis on dialogue/reconciliation in Pakistan and the renewed spirit with which such talks have been carried out, points to the obvious. The security establishment does not wish to make an enemy out of TTP at this crucial historical juncture. Let the Afghan endgame play out first.