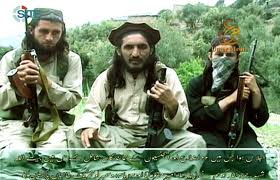 ISLAMABAD: Umar Khalid Khurasani Deoabndi, the ameer of the Mohmand Agency chapter of the Tehrik-e-Taliban Pakistan (TTP) is a journalist-turned-jehadi commander whose declared objectives as a staunch follower of bin Laden are to overthrow the government of Pakistan, impose Shariah, seize nuclear weapons and wage jehad until the Caliphate is established.

Khurasani hit headlines because of his chilling claim to have killed 23 soldiers of the Frontier Constabulary who had been abducted by the Taliban from the Shongari check post in the Mohmand Agency in 2010.

One of the most effective and powerful founding members of TTP from the tribal belt, the real name of Umar Khurasani is Abdul Wali who had been working as a journalist in Mohmand Agency before becoming a jehadi.

The Pakistani authorities had placed bounty on his head in 2009, followed by the army’s claim the same year to have killed him in an operation. But the claim proved false as Khurasani resurfaced on the jehadi scene shortly. Considered close to Mullah Fazlullah, he has ties with al-Qaeda just like the TTP ameer and he takes pride in having provided sanctuary to Dr Ayman al Zawahiri in the past.

In a video interview with Reuters on June 6, 2011, he had described Ayman Zawahiri as the supreme leader of the Pakistani Taliban, although the latter had not yet been named as Osama’s successor by that time.

Coming from the Safi tribe of Mohmand, Khurasani first shot to prominence at the time of Lal Masjid operation in Islamabad [in 2007] when he forcefully occupied a mosque and an adjacent shrine in Lakaro tehsil of Mohmand and announced to continue the mission of Maulana Abdur Rashid Ghazi. It was on July 28, 2007 that his militants took over the Jamia Masjid Ghaziabad Lakaro and renamed the mosque as ‘Lal Masjid’.

They also seized the adjacent shrine of Haji Turangzai, a known anti-colonialist freedom fighter, and renamed it as ‘Jamia Hafsa Umme Hassan’. Speaking on the occasion, Khurasani said he would continue the mission of Maulana Ghazi. A year later, Khalid Khurasani became the dominant Taliban commander in Mohmand Agency after defeating the Shah Khalid group (also known as Shah Sahib group), a rival pro-Taliban jehadi group associated with the Lashkar-e-Tayyaba.

Earlier, in May 2008, he had signed a peace deal with the Pakistani authorities which required him to renounce attacks on the Pakistani security forces. Under the deal, both sides exchanged prisoners. But as a result of the deal, Khurasani quickly established a parallel government in the Mohmand Agency. Subsequently, polio vaccination was stopped, Shariah courts were established, women were directed to wear the veil in public and criminals were arrested and judged in Sharia courts.

Khurasani has been deeply active in the propaganda machine of the Tehrik-e-Taliban since the death of Osama bin Laden in May 2011, and has been vocal in his support of al-Qaeda. Sitting with a pistol strapped to his waist and flanked by two of his comrades with AK-47 assault rifles, Khurasani said in his June 6, 2011 interview with Reuters: “We will take revenge of Osama’s death from Pakistan government, its security forces, the Pakistani ISI, the CIA and the Americans. They are now on our hit list. The death of Osama will not demoralise the Taliban. It had in fact, injected a new courage into our fighters. The ideology given to us by Osama and the spirit and courage that he gave to us to fight infidels of the world is alive.

Our war against America is continuing inside and outside of Pakistan.

Our attacks will prove that we can hit the American targets outside Pakistan”.

In video message released on jehadi websites on March 20, 2012 by the Umar Studios, Khurasani said the Taliban seek to overthrow the Pakistani government, impose Islamic Shariah as the supreme law of the land, seize the country’s nuclear weapons, and wage jehad until the Caliphate is established across the world. He further said: “We aim to counter the Pakistani government, its intelligence agencies, as well its army, which are against Islam and have oppressed the militants.

The Taliban want to seize the Pakistani nuclear weapons and other resources, including the army, to defend Islam. Another objective is to use Pakistan’s military might including the nuclear bomb, army, and other resources, to guide other Muslim countries for the sake of Islam. Last but not the least, the Taliban will continue their fight even after taking over Pakistan, until global Caliphate is established”, he added.

Khalid Khurasani is the same person who had claimed responsibility for the November 19, 2012 failed assassination attempt on former ameer of Jamaat-e-Islami Qazi Hussain Ahmed. By that time, the PPP government had launched a massive military operation to free Mohmand from the clutches of the Taliban. It was on 17 August, 2013 that the Frontier Corps Inspector General Major General Ghayoor Mehmood had declared that the writ of the government has been restored in Mohmand Agency after a successful operation against militants in their strongholds. However, the security forces had to sacrifice 270 valiant troops while fighting militancy. Of those martyred by the Taliban during the Mohmand operation, 170 were paramilitary troops of the Mohmand Rifles while the remaining 100 were the Pakistan Army soldiers who laid down their lives in the line of duty.

As the government and the TTP were contemplating to initiate peace talks, Khurasani said in a statement on September 30, 2013: “Any peace talks under the Constitution of Pakistan were simply out of question. The government talks about the Constitution and the Taliban demand the enforcement of Shariah. Therefore, there cannot be a dialogue between the two. The Taliban will never backtrack even a single inch from their already stated demand of the enforcement of Shariah as the supreme law of the land, instead of the Constitution”.

Following Mullah Fazlullah’s selection as the new TTP ameer, Khurasani had said in a November 13, 2013 interview [conducted in Pushto]: “The track record of the Pakistani government and its armed forces has always been one of breaking their promises and trying to trick the Taliban. With their last trick, our leader, Commander Hakimullah Mehsud was martyred. Therefore, it is obligatory for us to avenge his killing. We cannot imagine not taking revenge on this apostate Pakistani government. We will take our revenge by targeting the Pakistan army and the Pakistani politicians especially those in the government”.

When reminded by the interviewer that Hakimullah was killed by a US drone and not by the Pakistan Army, Khurasani had stated: “America is our enemy but we don’t blame it. Our real enemy is Pakistan. We will punish Pakistan because they tricked us. The Americans have been our consistent enemy and have never changed their policy towards us.

But Pakistan is an enemy which keeps changing colours. Had the Pakistan Army and the government not helped the Americans, they would not have been able to assassinate our ameer with the help of their drones. The Americans could not have found him and killed him without their help. Therefore, we believe that America has not hurt us as badly as Pakistan has. That’s why we are battling against the state of Pakistan”.