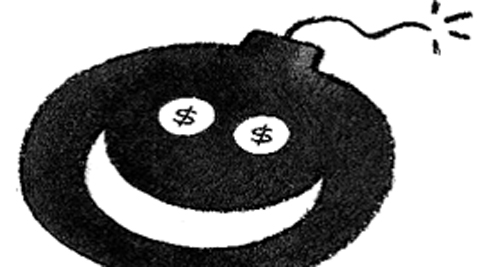 In Pakistan, the Taliban is negotiating in bad faith. Its choice of interlocutors for talks and list of demands confirm this.

The peace pipe Pakistan wished to smoke with the Deobandi Taliban was turned into  a pipe dream after the banned organisation issued, on February 9, the following “to do” list for Islamabad before it could think of a ceasefire: one, stop drone attacks; two, introduce sharia law in courts; three, introduce Islamic system of education in public and private institutions; four, release Pakistani and foreign Deobandi Taliban prisoners; five, restore property damaged by drone attacks and pay compensation; six, hand over control of tribal areas to local forces; seven, withdraw the army from tribal areas and close down checkposts; eight, drop all criminal charges against the Deobandi Taliban; nine, release prisoners from both sides; ten, grant equal rights for all, poor and rich; eleven, offer jobs to the families of drone-attack victims; twelve, end interest-based system; thirteen, end support for the US’s “war on terror”; fourteen, replace democratic system of governance with Islamic system; and fifteen, end all relations with the US.

After deciding to talk peace with the Deobandi Taliban, Pakistan had nominated a four-member “pro-Taliban” negotiating team. The Taliban responded by naming a five-member, equally “pro-Taliban” team, without consultation with them: Maulana Samiul Haq of the Jamiat Ulema-i-Islam-Samiul Haq (JUI-S), Imran Khan of the Pakistan Tehreek-e-Insaf (PTI), Kifaetullah of the Jamiat Ulema-e-Islam-Fazl (JUI-F), Maulana Abdul Aziz of the Red Mosque of Islamabad and Mohammad Ibrahim of the Jamaat-e-Islami (JI). None of them is a member of the Tehreek-e-Taliban Pakistan (TTP), which is a banned organisation. The new Taliban leader, a wanted criminal named Mullah Fazlullah, seemed to thumb his nose at the state of Pakistan by choosing his team from the politico-religious mainstream.

The five members represent a Talibanised section of the country, boasting old connections with the Afghan Taliban and the TTP. The irony was crushing — Prime Minister Nawaz Sharif’s own team contained people with pro-Taliban and anti-American leanings. The idea was to win the confidence of the Taliban, but Mullah Fazlullah didn’t bite. The talks wouldn’t commit the TTP to anything.

Another irony was that Fazlullah Deobandi named Imran Khan on his panel, thus creating a situation where the PTI would be talking to itself while pretending to talk to the TTP. Mercifully, Khan begged off from this absurd scenario. After that, Kifaetullah of the JUI-F too bowed out. The JUI-F is more vulnerable to the Taliban because of its location close to North Waziristan than Samiul Haq, whose seminary is close to Peshawar. Fazlur Rehman has escaped attacks from the terrorists, which means North Waziristan thinks him soft on the state of Pakistan.

Maulana Abdul Aziz, frontman of al-Qaeda’s policy of Islamic vigilantism in Islamabad, whom the judiciary is perhaps too scared to convict in scores of cases of terrorism, held a separate press conference in the capital with scary-looking armed guards to say that “nothing short of [the] removal of democracy and [the] constitution itself would be acceptable as a condition for peace.”

His Red Mosque was attacked by commando troops in 2007, after he staged a number of vigilante incidents to force Islamabad to become an Islamic city the way the Deobandi TTP thinks it should be. He symbolises Pakistan’s trajectory of Islamisation since 1947 and causes the Pakistani mind to split over what should be the next phase of state identity. By voting rightwing in 2013 against the ever-dwindling liberal elements, the people of Pakistan have joined the issue on the side of the Taliban. Intimidation plays the part of a persuader more than is often realised.

After Imran Khan and the JUI-F opted out,Deobandi Fazlullah reiterated his disdain towards Islamabad by proposing two replacements: the chief reporter of a leading English-language newspaper, Ansar Abbasi, whose reports read like sermonising opinion pieces; and a serving senior bureaucrat, Oria Maqbul Jan, whose crazy advocacy of the Taliban has upset all kinds of Pakistanis. Both begged off, although their worldview on TV talk shows has presaged the next mutation of the Islamic state.

A debate is raging on TV about sharia. Almost all religious organisations — most of them with street muscle and some clearly aligned with the TTP — are convinced that sharia is not in force, and therefore the Deobandi Taliban demand for dismantling the modern state is justified. An important presence on the negotiating panel appointed by the  Deobandi Taliban, the Jamaat-e-Islami, has however decided not to support the Taliban’s rejection of the current constitution.

The Jamaat clerics, however, insist that Pakistan’s Islamic constitution is not acted upon. They have in the past rejected the modern state’s punishment of “bad” conduct (munkirat) under a penal code and neglect of “good” conduct (marufat) as pieties enforceable through punitive legislation. Starting in the post-medieval period in Europe, the modern state stopped punishing the lack of piety and concentrated only on punishing crime. The Muslims of the world, free to choose as in Egypt, want it back. Already, Pakistan is fast losing the distinction between sin and crime.

The drive to get the arrested Deobandi Taliban out of state custody remains on top of the Taliban agenda. So far, they have broken two big jails under the administered jurisdiction of the state and got their killers out — most of them returning piously to their job of killing innocent people. The Shia remain in their crosshairs and don’t mind lying when it suits them to keep the common Pakistani deluded into thinking that the Shia are, in fact, being killed by America and India. They have denied the killing of Shias in a Peshawar restaurant earlier in February.

One reason the TTP has more credibility than the state is the former’s intimidatory hold over the media. Most opinion-makers in Urdu are already on their side because of Urdu’s more unbuttoned ideological message against the modern state. But the English-language newspapers are actually threatened into censoring themselves by removing the more convincing liberal-secular voices from their opinion pages.

The “popular consensus” is thus against the state and in favour of the terrorists. Of course, peace has to prevail, but will the state accept its death that easily? Sharif will have to intervene and say enough is enough at some stage of this unfolding farce.

In the first week of February, Finance Minister Ishaq Dar had to go to Dubai to meet the IMF team because the multilateral financial institution is unwilling to come to Islamabad after being painted by the media as an enemy of Islam and as an instrument of America’s diabolical plots against Pakistan. Dar was asking the IMF for another loan of a half a billion dollars while the Taliban had made a billion dollars in 2013 from Karachi alone .

One reason the Taliban can’t think of peace is the money it is making in Pakistan with almost zero loss of manpower, setting itself apart from the terror franchises in Yemen, Somalia and Mali — dying states that don’t have the financial lucre to attract terrorists. Pakistanis wonder who is financing the Taliban, often blaming Saudi Arabia, America and India.

The fact is that the Taliban is in the process of emptying Karachi of its cash after leaching the city of Peshawar dry. Out of the four billion dollars the Afghan Taliban makes from heroin, at least one billion falls to the TTP’s share as the “southern funnel”. Moreover, news of shakedowns from Islamabad and Lahore is being suppressed because the well-heeled victims want to keep it hush-hush.