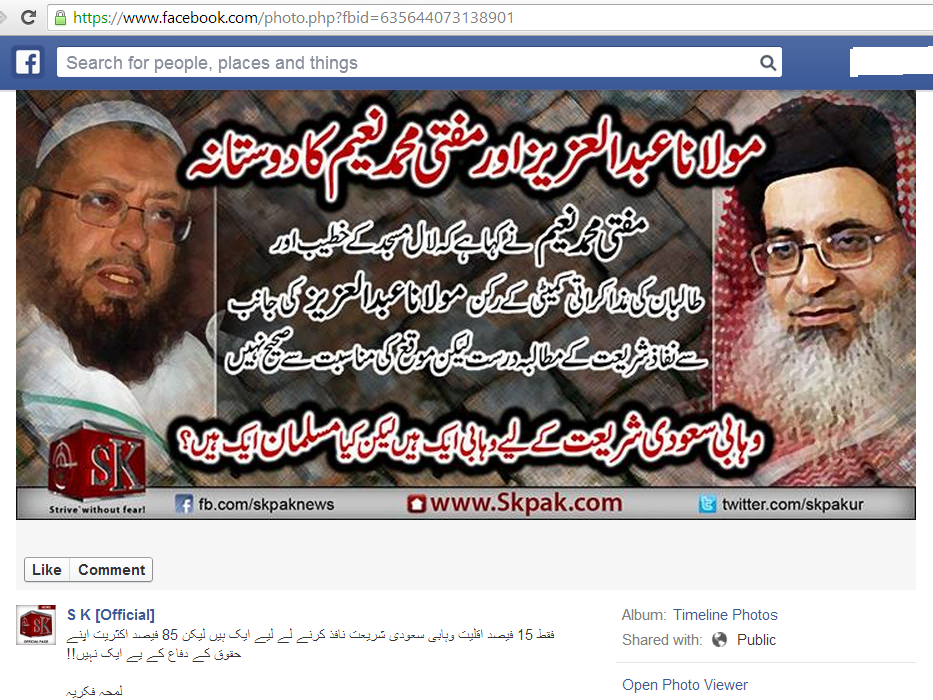 The first step to solve any problem is to identify it. In Pakistan, one cannot address the one-sided violence against Shias, Sunni Barelvis, Hindus, Chrisians and Ahmadis unless one correctly and clearly identifies the Deobandi ideology of the TTP and ASWJ militant outfits.

Only by identifying the culprit can one devise any solution to address the issue.

Shia activist online portal, namely SK Media (Shia Kiling), which otherwise does an excellent job of urgently highlighting all instances of Shia Genocide, also falls into the trap of incorrectly identifying the ideology of the ASWJ/TTP who are not only conducting Shia Genocide but also massacring Sunni Barelvis, Ahmadis, Christians and Hindus.

Shia activists at SK refer to the banned Deobandi outfit Sipah-e-Sahaba Pakistan (SSP aka ASWJ) and Taliban (TTP) as “Wahhabi” when they themselves refer to their ideology as Deobandi. This has become clear in the ongoing debate on the media when anti-Shia clerics like Mullah Abdul Aziz of Lal Masjid openly proclaims Deobandi identity.

This is also clear when Sunni Barelvi activists and leaders like Sahibzada Hamid Raza and pro-army mouthpieces such as Zaid Hamid openly denounce the Taliban and their intolerant Deobandi ideology.

By not clearly referring to Deobandi terrorists groups, SK and other naive Shia and Sunni activists are simply creating confusion both to their Pakistani as well as its international audience. To address this issue, Shias cannot afford further confusion.

DEOBANDI TERRORISTS are killing Shias of all types (Hazaras, Pashtuns, Muhajirs, Saraikis, and you name it).

DEOBANDI TERRORISTS are killing Christians from Peshawar to Karachi.

DEOBANDI TERRORISTS are killing Ahmadis, Sikhs, Hindus and other minorities as well.

Who is the common killer?

They are even killing the traditional peaceful DEOBANDIS and Ahle Hadith who do not subscribe to the Saudi Riyal.