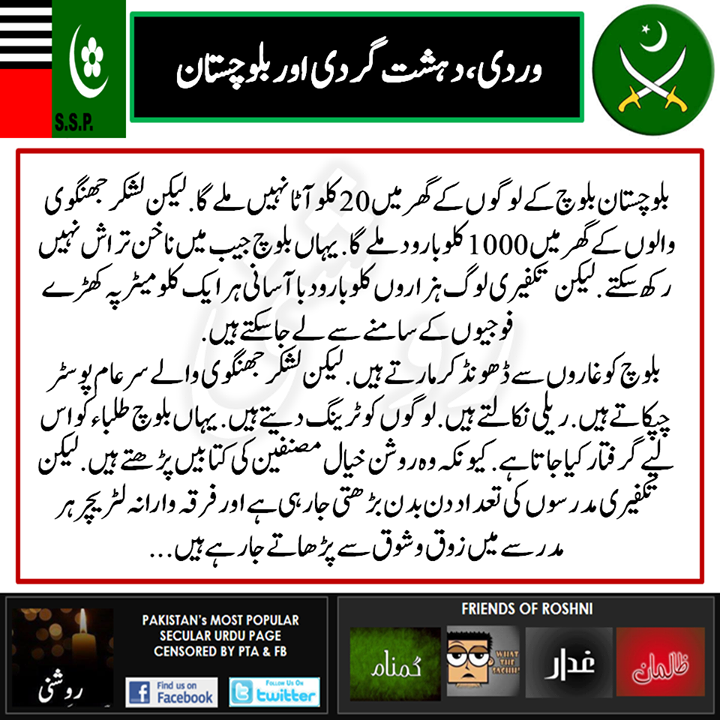 Those who have any idea about LUBP’s stance on Pakistan’s various socio-political issues will have little doubt about how we feel about Army’s taking action against the Taliban, the bloodthirsty Deobandi terrorist outfit (varoiusly known as TTP and ASWJ-LeJ) which has been killing Shias, Sunni Barelvis, Ahmadis, Hindus, and Christians without a pause. Anyone reading media reports these past few days will feel that something of the nature of an action against the Taliban is not very far. An Express Tribune report quoting a government official says, “Hundreds of people have fled their homes in Mir Ali, a sub division of North Waziristan Agency, in anticipation of a military operation in the area” (http://tribune.com.pk/story/663158/exodus-from-mir-ali-hundreds-flee-homes-over-conflict-fears/).

Dawn has conveyed the same information in almost the same words (http://www.dawn.com/news/1082634/thousands-flee-north-waziristan-after-airstrikes)

The headline of The News report claims that the action has already started. It says, “Forces start operation in Mastung, Panjgur ” (http://www.thenews.com.pk/Todays-News-13-28151-Forces-start-operation-in-Mastung-Panjgur). The same report wants us to believe,

The operation was launched following the directives of Federal Interior Minister Chaudhry Nisar Ali Khan. Balochistan Chief Minister Dr Abdul Malik will monitor the operation. Hundreds of Frontier Corps (FC) and police personnel are taking part in the operation while helicopters are also being used to assist the forces.

Federal Minister for Railways, Khwaja Saad Rafiq Saturday said the decision has been taken and now the forces would retaliate with full force in case the terrorist attacked. “It will no longer be the case where terrorists go on exploding bombs while security forces remain silent” (http://www.thenews.com.pk/article-135492-To-retaliate-with-full-force-if-attacked:-Rafiq).

Pervaiz Rasheed, the federal Minister of Information and Nawaz Sharif’s official spokesman, has told the nation that Imran Khan would be taken on board about the impeding action against the Taliban (http://www.dawn.com/news/1082640/imran-to-be-taken-on-board-on-likely-military-action-against-ttp).

Not to be left behind is Khursheed Shah, the leader of the opposition who has urged Nawaz Sharif to show guts and assured him of his party’s support against the Taiban (http://dunya.com.pk/index.php/pakistan/2014-01-25/298985#.UuRUpBB9LIU).

Reacting to the Army action against the Taliban, religious parties have warned the government against it

We believe that the entire discourse built around the claimed/forthcoming action against the Taliban is no more than a noora kushti, a fixed fight, in which the media, the Nawaz government, the mullahs, and the Army are complicit. From whatever evidence available, it is possible to claim that no credible action against the Taliban is in the offing. First, whatever information about the Taliban ‘killed’ in the Army ‘action’ is made public comes from a suspect source, the Army itself. What is the evidence offered when the Army spokesman claims that X number of “militants” have been killed? Whenever the Army chief reacts to the Taliban killing his soldiers—not once, but a number of times—he is careful not to name the Taliban (http://www.news.nom.co/pakistan-army-chief-says-terror-attacks-7559083-news/). His favourite expression is “terrorist attacks”. Let alone the Taliban, he does not even say “Terrorists”. So, who are those carrying out “terrorist attacks,” then?

We know it is the Taliban. Where are they located? The Generals and their lackeys like the media men and Nawaz Sharif and his team harp on North Waziristan as the base of the Taliban. This is where LUBP has the most important issue with the Army and its flunkeys. First, we believe that the Army will take no action against the Taliban. An army which believes that the Taliban are its strategic asset to be used to make Afghanistan its satrapy after the NATO forces pull out in a few months’ time cannot be trusted to act against them. Besides, as alluded to above, what is the evidence that the Taliban are based in North Waziristan?

Again: Where are the Taliban?

Go to any major town or city in Pakistan, and you will find how well established the Taliban are in the shape of banned terrorit outfit Sipah-e-Sahaba Pakisan (SSP) which is freely operating with a new name ASWJ (Ahle Sunnat Wal Jamaat). Stand outside a Deobandi mosque on Friday, and you will find out that its Friday sermon  is filled with takfiri venom against the Shias. South Punjab is practically controlled by the Taliban through its various arms such as Jaish-e-Muhammad (JM) and Lashkar-e-Jhangvi LeJ). Killers and murderers like Malik Ishaq and their ideologues like Mullah Ludhianvi and Aurengzeb Farooqi are protected by the police and various intelligence agencies. These terrorists are based in Pakistan’s major urban centres. If they, who are so visible and free to act, are not touched by the government, then how will the terrorists hiding in Waziristan be targeted? The Punjab government provides stipends and protection to the Taliban, and Shahbaz Sharif calls them “our brothers”.

In Karachi, the Taliban operate with impunity. They rule many areas of Karachi where they have imposed their brand of Shariah. Only a couple of days before, they killed innocent polio workers, and the government has not even discussed the matter, let alone condemn or arrest them (http://www.dawn.com/news/1081817/my-mother-works-for-rs250-a-day-to-keep-us-alive). Only yesterday, the Karachi Taliban openly distributed pamphlets in several areas of the city ordering women to wear burqa and men to grow beard or get ready to be beheaded (http://www.nawaiwaqt.com.pk/karachi/09-Feb-2013/174272).

If action is required, it is in places like Lahore, Rawalpindi, Islamabad, Quetta, and Karachi, and not only in North Waziristan.

The Army and the government want to befool the world by showing them that they are (at last!) tough on the Taliban. But this is a bogus thing to do, and no one will believe them. Army action against the Deobandi Taliban in their various incarnations such as Ahle Sunnat Wal Jamat (ASWJ) and Lashkar-e-Jhangvi (LeJ) will have to start not from a remote and inaccessible place like Mir Ali, but from places like Karachi where terrorists operate with impunity and kill innocent Pakistanis. 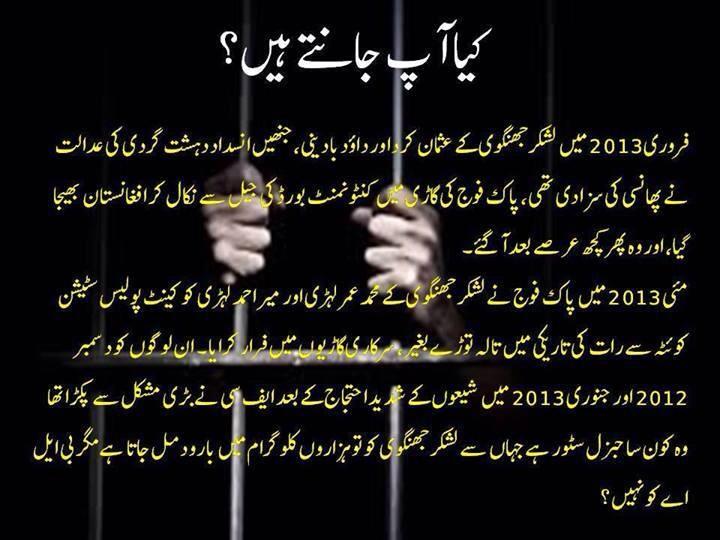