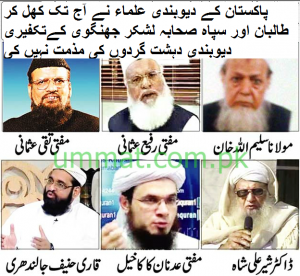 Since its very birth, Pakistan has favoured the Deobandi school. This favour touched new heights during the ‘darkest ages’: the years of General Ziaul Haq who was a protégé of the Wahabi state of Saudi Arabia

Thanks to the Almighty, 12th Rabi-ul-Awwal, the birth anniversary of Prophet Mohammad (PBUH) passed somewhat peacefully. However, the tightened security measures, along with shutting down the mobile phone networks, not only frightened everybody but also indicated how insecure we are — we cannot even celebrate religious events peacefully.

Despite deploying thousands of police and other security personnel on Moharram and Eid-e-Milaad-un-Nabi, and despite sacrificing many of these poor personnel, the state as well as society constantly denies the existence of any sectarian fighting in Pakistan. Whether it is Moharram, Eid or Eid-e-Milaad-un-Nabi, the Muslims of Pakistan become nervous instead of becoming jubilant, mournful instead of thankful given the nature of these events just because of the religious ruptures in the social fabric of the ‘Pakistani ummah’. There is continued indoctrination on sectarian basis through the loudspeakers on the minarets and by means of the various, exclusive ideological enmities taught at the madrassas (seminaries) established by the various warring sects. These are not the only sources of religious hatred; there are thousands of pamphlets and books published in Pakistan that promote religious hatred. In addition, there are multiple websites, magazines and social media pages that widen not only the divide but also instigate violence on religious grounds.

The pious men and women at the Pakistan Telecommunications Authority (PTA) can easily stop Facebook pages like Nai Roshni — a webpage promoting rational thinking and trying to deconstruct Taliban ideology — and YouTube, but it avoids touching the multiple web-pages and websites of the terrorists either due to fear or complicity. In Pakistan, the Barelvi school of Sunnis celebrates the birth anniversary of Mohammad (PBUH) on the 12th of Rabi-ul-Awwal (third month of the Islamic lunar calendar) while the Deobandi school of Sunnis regards celebrating Eid-e-Milaad-un-Nabi heresy.

The divide goes back to religious debates in British India between the Deobandi and Barelvi scholars before partition. Religious anthropologists suggest that the former is akin to the subcontinent while the Deobandi school is under the influence of the Wahabi school of Sunnis, especially in Saudi Arabia. They also suggest the Barelvi school, which also recognises and respects the various schools of Islamic Sufi tradition, has always been more peaceful than the other. They had less political aspirations while the Deobandi school is politically strong. The major religious parties that contest elections in Pakistan adhere ideologically more or less to the Deobandi school. Among them, the Jamiat-e-Ulema-e-Islam (JUI), a successor of the Jamiat-e-Ulema-e-Hind and Maulana Maududi’s Jamaat-e-Islami (JI) have considerable political say in Pakistan. The JI claims to represent all sects but its overwhelming majority does not have many differences with the Deobandi school but could not shatter this perception because its members and leaders have been found sheltering al Qaeda terrorists. Both the JI and JUI hold in low esteem ‘traditional’ Islam — in other words subcontinental Islam.

Since its very birth, Pakistan has favoured the Deobandi school. This favour touched new heights during the ‘darkest ages’: the years of General Ziaul Haq who was a puritan Muslim himself in addition to being a protégé of the Wahabi state of Saudi Arabia. Under Zia’s policies, the Deobandi (read Wahabi) version of Sunni Islam was inculcated in the youth and children through public schooling and a network of Deobandi madrassas. The textbooks for Pakistan Studies, Urdu and other subjects were filled with lessons on Deobandi scholars and there was no mention of the other schools. In these textbooks, scholars were painted as saints and sages. A religious scholar, Syed Ahmad Sarhindi, was made Mujjadid-e-Alf-e-Saani (Sage of the Second Millennium) and his achievements were exaggerated hyperbolically. Similarly, Shah Waliullah, another great scholar, became the subject of many lessons in Pakistan Studies and Urdu textbooks. Both these scholars were great intellectuals in their particular spheres but their inspiration was mainly drawn from the urge to ‘purge Islam from the norms or influences of Hinduism’. In this way, it was an antithesis of Sufi Islam.

Sufi saints were the real harbingers of Islam in the subcontinent. Syed Ahmad Barelvi, though an inhabitant of Raibreli, was a disciple of the school of Shah Waliullah. He waged a jihad against the Sikhs and ended up in Balakot in Khyber Pakhtunkhwa. He has been made a hero in Pakistan Studies textbooks.

Now, as our politicians are obsessed with the US and its drones, and many of them are in the forefront to appease the Taliban, the state stands begging for peace from the Taliban. One wonders what will become of sectarian strife in Pakistan. It seems the rulers think that if the Taliban are silenced by any means, sectarian strife in the country will end automatically. This is like putting the cart before the horse. The Talibanisation of society is actually an extreme manifestation of what our society is taught through mosques, madrasaas and schools. There is no question of the Taliban adherence to the Wahabi school, which regards all to be infidels except itself. This puritanical ideology has pushed the country to the verge of demise.

Both the state institutions and society must come out of this state of denial. They must admit the problem and then design a counter-narrative to fight it. The present policy of the ostrich sticking its head in the sand will not work. It will never work when we declare there is no sectarian violence in Pakistan and that what is going on is the ‘enemy’s’ conspiracy. The fact is that we are a failing state and an intolerant society. Once this weakness is admitted, there can be some remedy for it. The counter-narrative needs a holistic approach on every front: use of state force, dialogue with the terrorists, change in the foreign policy, reforms in education and effective laws.