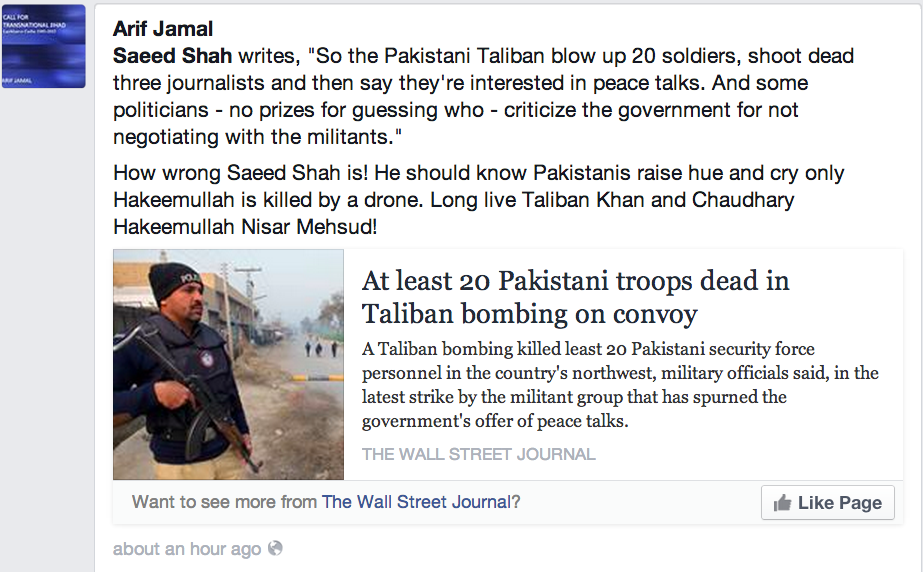 KARACHI, Pakistan—A Taliban bombing killed at least 20 Pakistani troops in the country’s northwest, military officials said, in the latest strike by the militant group even as the government sticks to its offer of peace talks.

Sunday’s attack came after the Taliban issued what is, in effect, a declaration of war on the country’s media, shooting and killing three members of a camera crew from a news channel on Friday. A fourth member of the crew from the Express News channel was also shot while filming a story, but survived.

On Sunday morning, a military convoy was assembling in the northwestern town of Bannu for travel to the North Waziristan tribal area. That is when, security officials said, a bomb exploded in a civilian vehicle that had been hired to accompany the unit.

In addition to the fatalities, 30 troops were injured in the explosion, half of them described as being “in critical condition” by the military. Six of the dead were “beyond recognition” and DNA tests would be required to identify them, said a military official. The weekly convoy was a mix of the paramilitary Frontier Corps troops and the regular army.

Prime Minister Nawaz Sharif’s unconditional offer of negotiating with the Pakistani Taliban, who work closely with al Qaeda, was met by a sharp escalation in militant violence in recent months. The militant movement, formally known as Tehreek-e-Taliban Pakistan, is based in tribal areas such as North Waziristan but operates across Pakistan.

Mr. Sharif, in response to the Bannu bombing and what he called “the recent spike in terrorist incidents,” canceled his planned trip to attend the World Economic Forum in Davos, Switzerland.

“Our nation is united against extremism and terrorism and the sacrifices rendered by our citizens and personnel of law-enforcing agencies will not go in vain”, Mr. Sharif, who was elected last May, said.

The army and the Frontier Corps remain mostly inside their bases in North Waziristan. Pakistan has long resisted American pressure for an operation against the Pakistan Taliban and the Afghan insurgents who are also based there.

Imran Khan, the former cricket star whose party controls the provincial government of Khyber-Pakhtunkhwa, where Bannu is located, and who has been the most ardent advocate of peace talks with the militants, condemned Sunday’s bombing.

“Such terror attacks by the TTP, along with the federal government’s continuing inability to formulate a comprehensive counterterror policy, have made it difficult to actually commence a formal dialogue and give peace a chance,” Mr. Khan said.

As well as stepping up attacks, the Taliban in recent months have also made preconditions for talks that the government would find impossible to meet, including withdrawing the army from the tribal areas, releasing militant prisoners and stopping U.S. drone strikes. Yet the militants, and opposition politicians favorable to talks, continue to blame Mr. Sharif’s government for the failure to open negotiations. The Pakistani Taliban Sunday again accused the government of not being serious about the dialogue.

“Our stand is that if the government is empowered and sincere, then despite such heavy losses on our side, we are still willing to engage in meaningful talks,” said Shahidullah Shahid, a spokesman for the TTP, as he took responsibility for the Bannu attack.

On Friday in Karachi, gunmen on a motorbike sprayed with bullets a satellite transmitter van, which had Express News written across it, the channel and police said.

“Our target was Express now but it will be someone else’s turn next,” warned Ehsanullah Ehsan, another spokesman for the TTP, in a written statement after the shootings. “All the media groups work on the directions of the government.”

Mr. Ehsan complained that the reporting of the Pakistani media was “one-sided” and portrayed the militant movement negatively. It is unclear why Express was singled out but several media groups, including at least one foreign news organization, are believed to be on the TTP’s hit list.

“The message is simple: they aim to keep journalists in Pakistan terrorized,” said Ghulam Mohammad Jamali, president of the Karachi Union of Journalists.

The Pakistani Taliban regularly threaten journalists and have been blamed for killings in the past, but those happened mostly in remote areas. This was the first time that they unleashed such a large-scale attack, in Pakistan’s biggest city, and owned up to it.

Following the killing of the media workers, Mr. Sharif said he had directed the interior and the information ministers “to immediately present workable solutions to address security threats to media houses.”

Pakistan has been consistently rated as one of the most dangerous countries in the world for journalists by Reporters Without Borders and other international media lobbying groups. Mr. Jamali said 120 journalists had been killed in Pakistan since 2000 and “none of their murderers had been held to account.”

—Syed Shoaib Hasan in Karachi
and Safdar Dawar
in Peshawar, Pakistan,
contributed to this article.

Write to Saeed Shah at saeed.shah@wsj.com