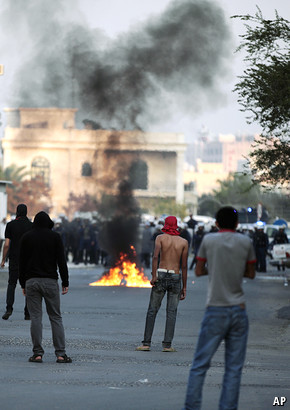 SOON there will be no empty walls in the villages west of Manama, capital of the tiny island kingdom of Bahrain. Graffiti calling for the king’s overthrow are crossed out by the authorities every day, only to reappear somewhere else, until the walls are entirely covered by black splodges. Police vehicles sit at the entrance to every village. Even in the shiny, built-up areas of Manama many residents grumble. “There is no freedom, no justice and no democracy,” complains one man.

Bahrain, where a Sunni monarchy has long ruled over a Shia majority, saw a brief flickering of Arab spring protests in February 2011. The biggest were brutally put down with the help of troops from neighbouring Saudi Arabia. Yet smaller protests have continued. Violent clashes erupted on December 6th when the government hosted a jamboree of security and military officials from the region (Bahrain’s 40-person delegation included people close to the Shia opposition). Youths in several villages threw stones and Molotov cocktails; security forces lobbed back tear gas and sound bombs.

Human-rights organisations warn that the situation is deteriorating. Two years after an even-handed report by the Bahrain Independent Commission of Inquiry—a laudable effort by King Hamad bin Isa al-Khalifa—few of its recommendations have been implemented. Opposition activists are harassed and imprisoned; many want to leave the country. Foreign journalists are rarely granted visas.

The trial of Khalil al-Marzooq, a former parliamentarian and prominent figure in al-Wefaq, the leading opposition block, has caused much upset. Mr Marzooq may have been foolish in posing with a flag of the February 14th Coalition, an opposition group that has some violent members, but that hardly warrants charges for inciting “terrorist crimes”. The opposition has suspended its involvement in a national dialogue in response, and political reconciliation has stalled. Both sides say they are keen to make progress, but trust is in short supply.

The government has pushed the protest movement into a more radical direction by depicting its uprising as a sectarian struggle rather than a call for democracy. Bashar Assad, the Syrian president fighting a Sunni-majority population, follows a similarly divisive strategy. By calling the opposition an Iranian proxy, Bahrain’s rulers have managed to rally fellow Sunnis around them, overcoming grumbles on all sides about the rising cost of living and a lack of say in the country’s politics.

Shia opinion is far from united. Al-Wefaq says it is not seeking the government’s overthrow, and indeed recommends a constitutional monarchy. But it struggles to convince parts of the opposition. Some are locked in a stand-off with the police.

Even moderates are angry that 38 mosques were destroyed during raids and few have been rebuilt, says Maytham al-Salman, a Shia cleric, though the government had agreed to do this last year. “Politics is one thing but to attack religion is another”, says a rights activist.

Protesters are especially resentful that the government employs many non-Bahrainis in the police. The ranks of the well-paid security forces include many Yemenis and Pakistanis; Shia applicants for police jobs are usually turned away. The extensive use of tear gas has become another bone of contention; a document leaked in October exposed plans by the interior ministry to buy 1.6m additional rounds of the stuff.

So far the Khalifas have been able to keep the protests under control, helped by the Saudis and reassured by the presence of America’s Fifth Fleet, permanently based here. The economy has not gone under, as some feared in 2011. Growth next year is expected to be 3.3%. Despite jitters, few firms have left Bahrain, a regional financial centre, partly to avoid offending Saudi Arabia, the islands’ godfather.

Moderate protesters pin their hopes for reform on Salman bin Hamad al-Khalifa, the 44-year-old crown prince. However, the untested ruler-in-waiting must contend with hardliners in his own family. For the foreseeable future, Bahrain’s Shias can expect more tear gas