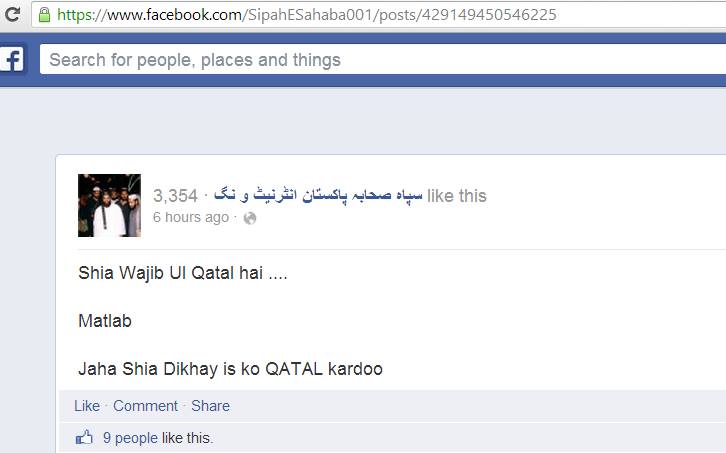 In this post, we are publihsing several images which can serve as a case study and exemplar of the systematic violence, threats and harassment currently facing Pakistan’s Shia Muslims at the hands of terrorists of banned Deobandi outfits, namely Sipah-e-Sahaba Pakistan (SSP aka ASWJ) and Taliban (TTP).

These images have been taken of naked threats posted against Shia Muslims eg Shias must be killed (Wajib-ul-Qatl) by Deobandi web sites and social media portals. Many of the threats, in these images, pertain to planning by Deobandi SSP-ASWJ terrorists to attack Shia procession of Chechlum (Arbaeen) in Rawlpindin on 23 Dec 2013. However, the Deobandi violence is not limited to Shias alone. They have also killed thousands of Sunni Barelvis, Ahmadis, Christians, moderate Deobandis etc. 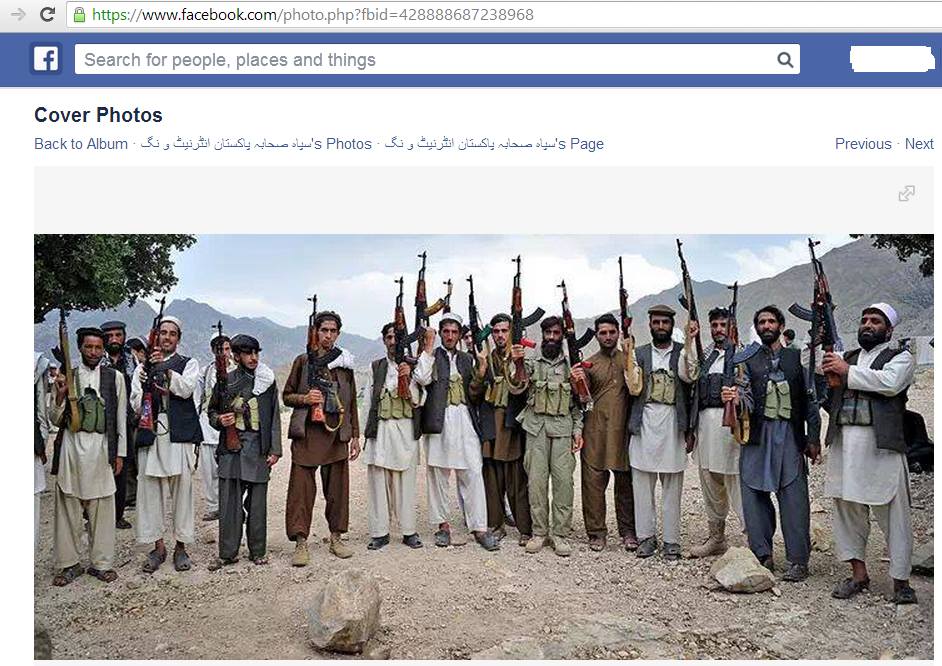 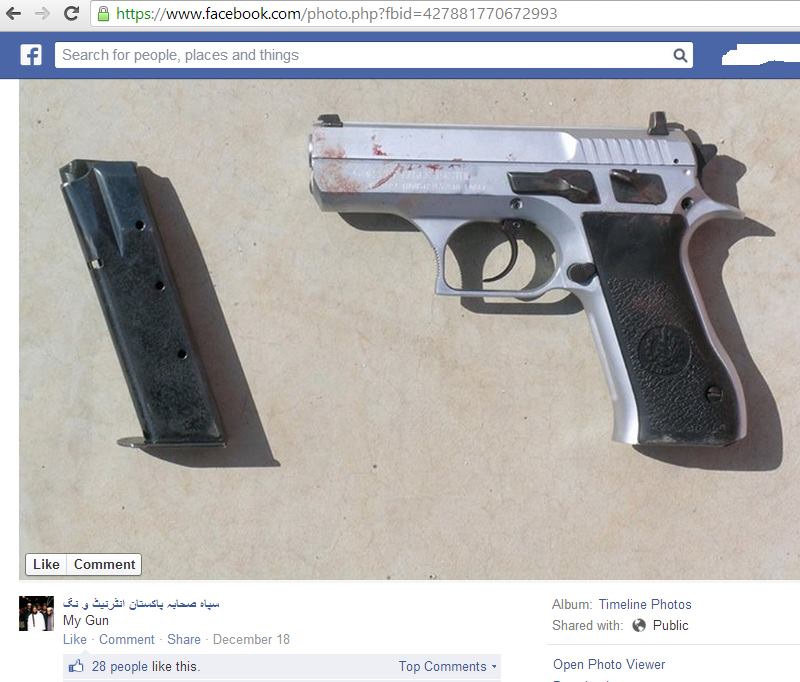 There is no doubt in the fact that the banned Deobandi terrorist organization Sipah-e-Sahaba Pakistan (SSP, currently working as Ahle Sunnat Wal Jamaat ASWJ) is behind the ongoing Shia genocide in Pakistan and is also responsible for massacre of Sunni Barlvis, Christians, Ahmadis etc.

The Takfiri Deobandi terrorists are now trying to openly incite violence against Shias and increase the scope of violence against them. This is being done both through creation of an environment and mass scale propaganda in which social media, print media and electronic media are being used.

Pro-Taliban authors, such as Saifullah Khalid of daily Ummat, are justifying violence by Takfiri Deobandis in the print media and electronic media personalities like Hamid Mir are rationalizing the Takfiri discourse on television and putting the onus of violence, and ironically even the responsibility of their own genocide, on Shias themselves. While Saifullah Khalid would try to present 50 million Shias as Iranian proxies and ask for their excommunication and state persecution, Hamid Mir would insidiously create a popular narrative in which Shias are presented as blasphemes of the companions of Prophet (saww) and, therefore, liable to be killed and their religious processions will be presented as the main reason for their deaths and also a security threat to others, including business community, and therefore subject to constant questions.

Unfortunately, some apparently lifestyle liberals (but closet Shia-haters) masquerading as sane voices have also joined the bandwagon of blaming the victims. This is obviously in line with the overall policies of the deep state which is now a denizen of bigoted deobandis planning to make Pakistan a deobandi state – something that will be a nightmare for the whole world.

However, if one only spends some time on the social media, or goes through a facebook pages maintained by takfiri deobandis, who target Shias as well as Barelvis, Ahmadis, Christians, Hindus and other religious groups, one finds out where the problem actually lies.

These pages like ‘Sipah-e-Sahaba Pakistan Internet Wing’, ‘Ahle Sunnat Wal Jamaat – Deoband’, ‘Farooqi Markaz Pakistan’ and ‘ASWJ Media Monitoring Cell’ with thousands of followers clearly incite violence against Shias, declare them Wajib ul Qatl (obligatory to be killed), carry out hate speech and false propaganda against them.
These pages (screens below) also show that takfiri deobandis own and celebrate the killings of Shias in target killings and bomb blast by the terrorists who they call their brother mujahideen and who the media calls ‘unknown’. They affiliate themselves with the terrorists fighting in Syria and openly admit travelling to and fighting in Syria alongside Al Qaeda. They openly say that they would kill all Shias and incite people to violence against all Shias declaring them apostate. They post pictures displaying arms and armed men threatening the Shias. And in view of the recent developments, they have launched a concerted campaign to incite people to violence against the Shia procession of Chehlum of Imam Hussain (as) that the takfiri deobandis have vowed to stop at any cost. 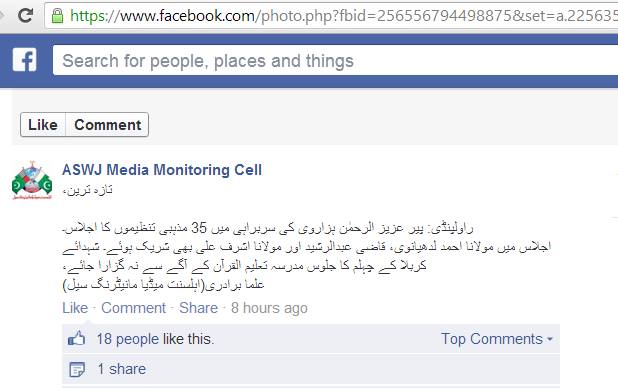 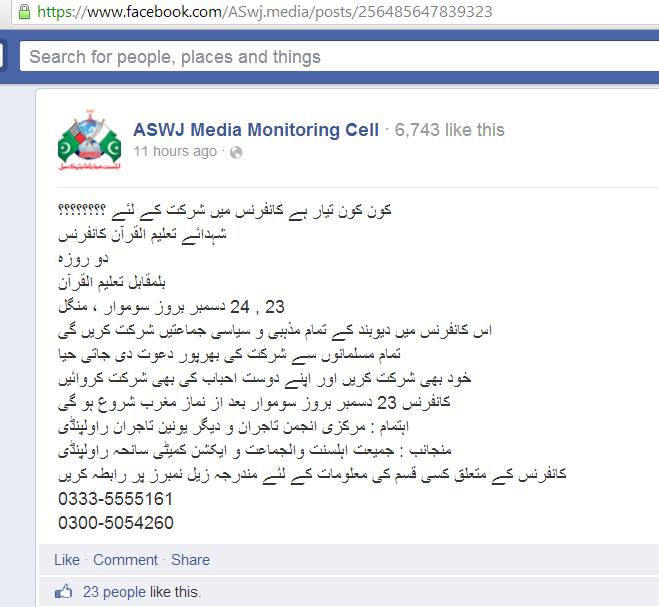 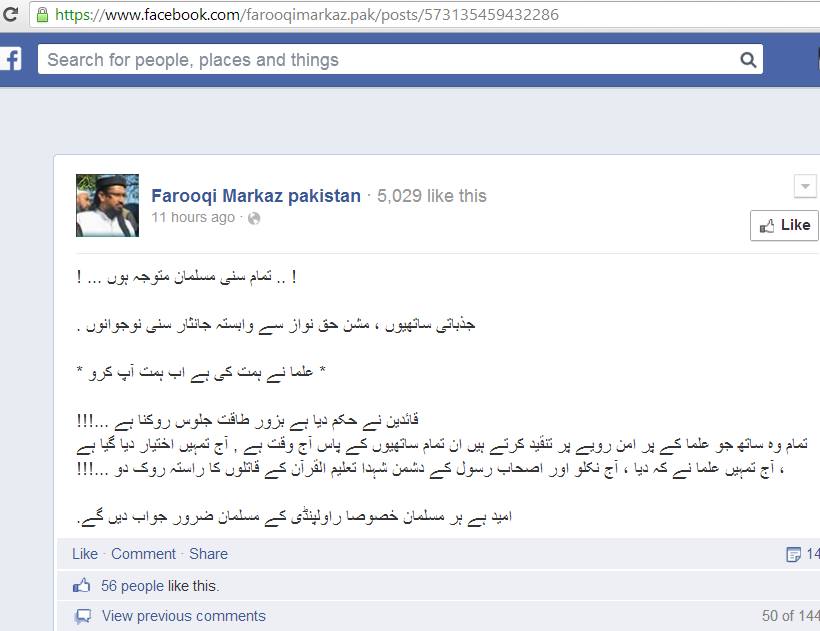 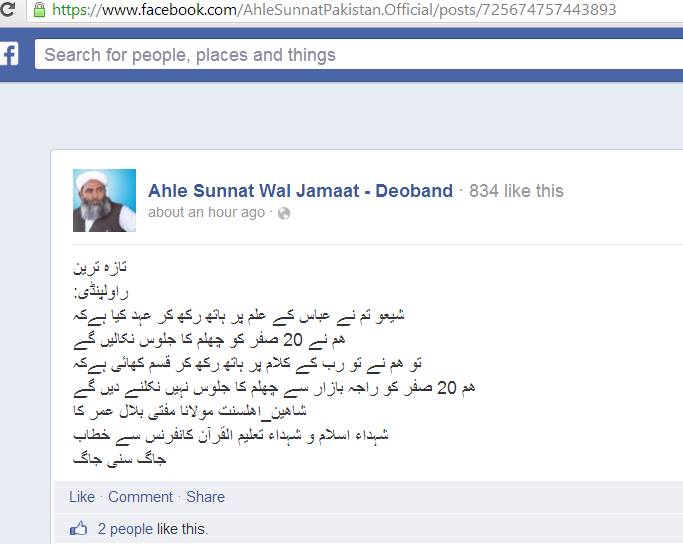 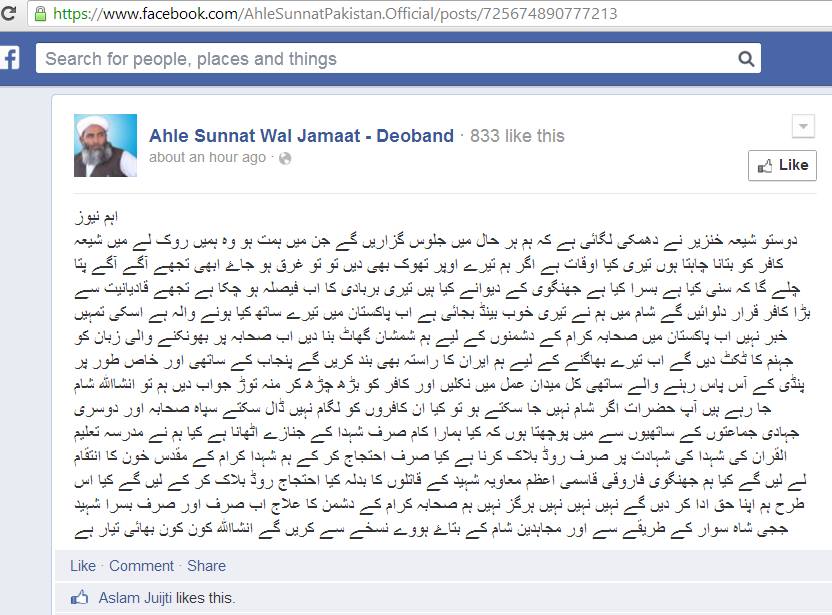 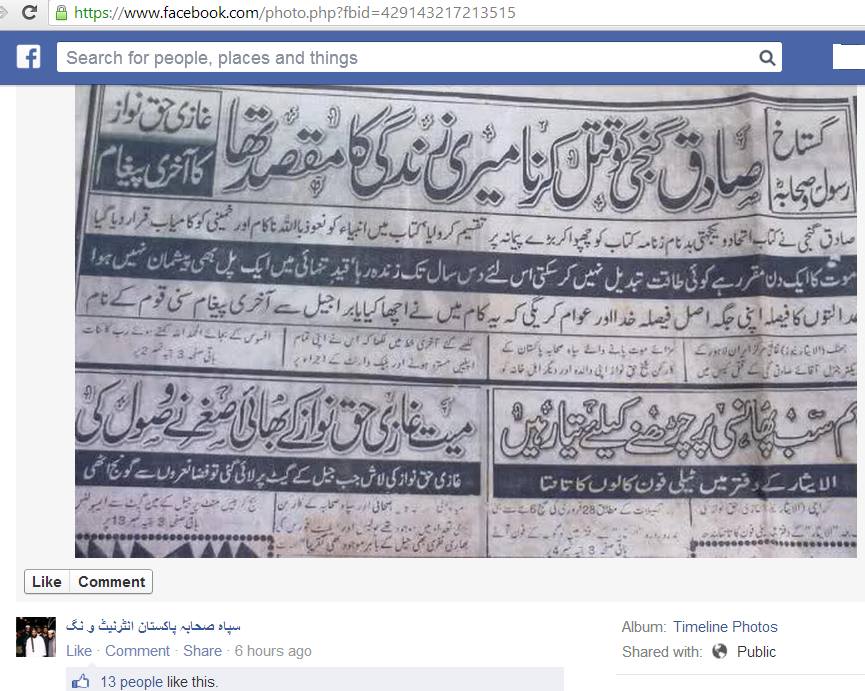 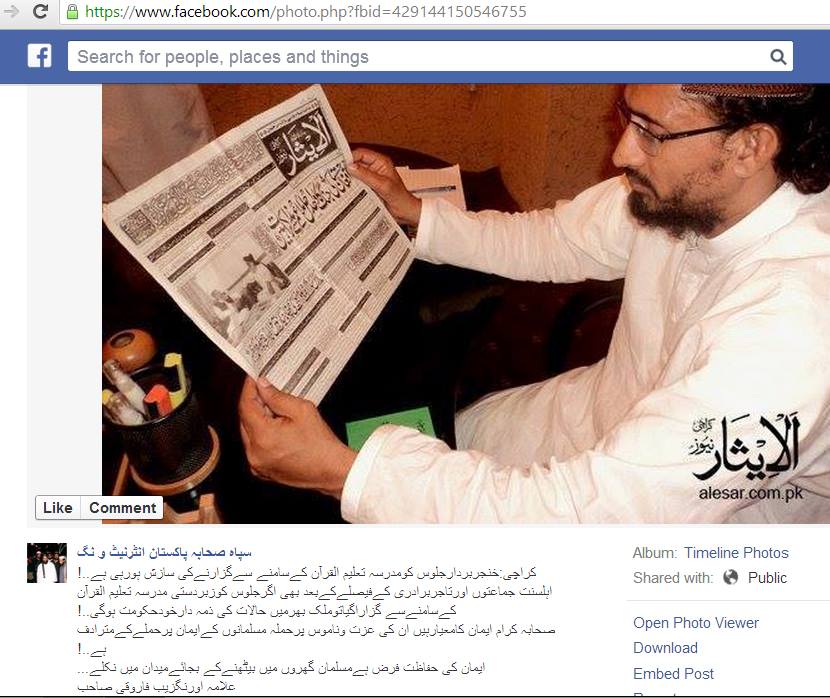 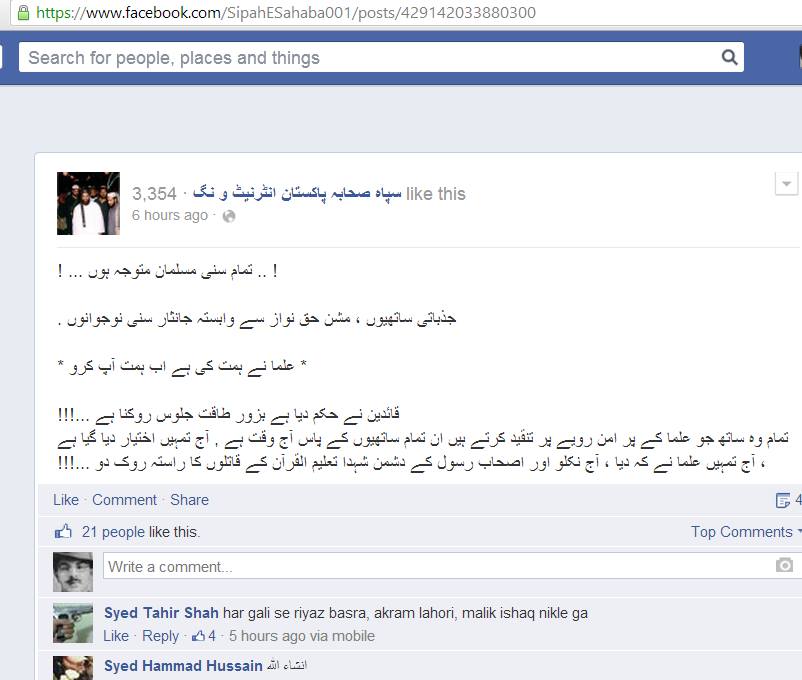 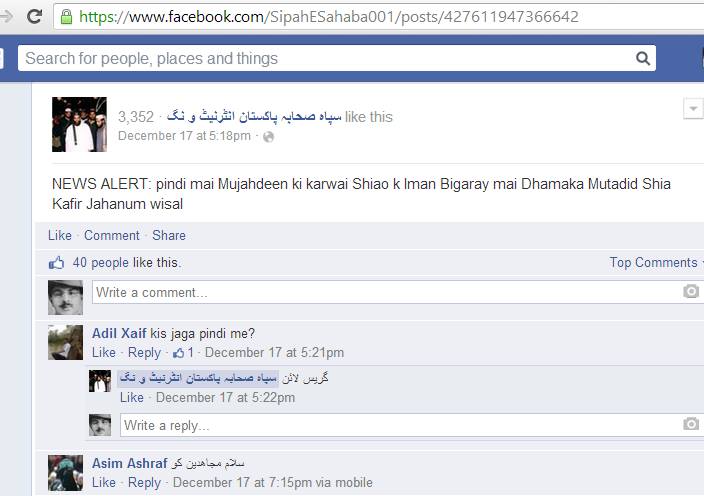 What is more worrying is that the Pakistan Telecommunication Authority (PTA) that bans progressive Facebook pages (eg Ahmadiyya web sites, Shia Killing, Roshni etc), lets the hate speech and violent messages of these deobandi pages go unchecked. It shows that just as the government, the army and the intelligence agencies support and allow terrorist deobandi organizations kill Shias and other religious group with impunity, they also allow them to run their hate speech on media and social media.

Instead of holding the Shia responsible for their own deaths, it should be taken notice of that the takfiri Deobandis are already threatening the Shias, owning violence against them, and vowing to violently stop the Shia procession, so any responsibility of any untoward incident already is upon them and the government that supports and facilitates them. 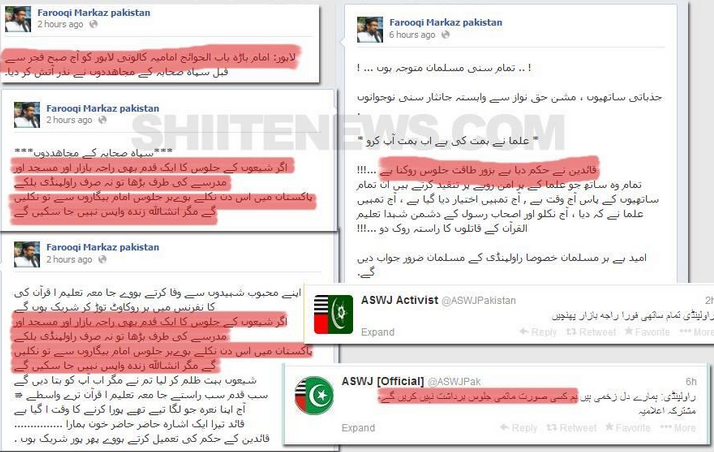 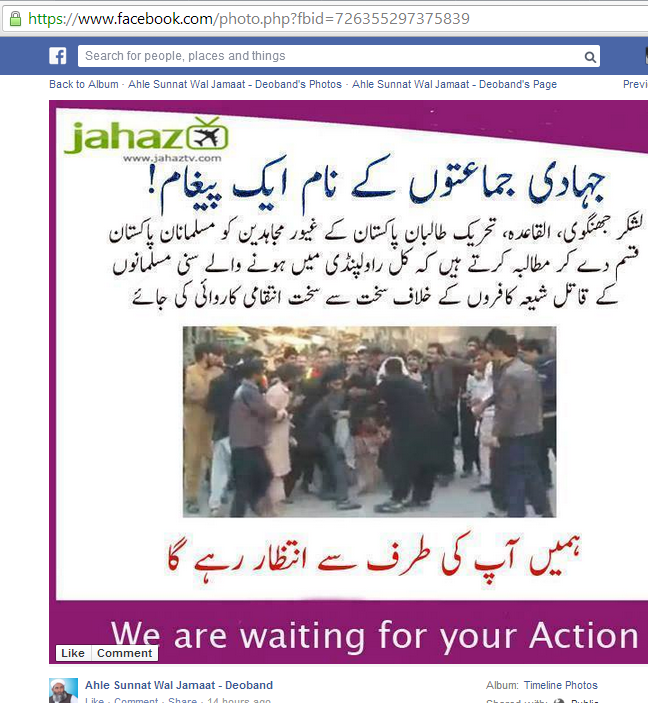