Judging by the reaction of Pakistan’s Deobandi politicians and journalists over Abdul Quader Molla’s hanging, one should not be blamed if one thought that in Bangladesh an innocent man of God has been lynched by a mob.

On 13 December 2013, Abdul Quader Molla, a top leader of Jamaat-e-Islami was hanged for raping Bengali women and mass killing Bengali men and children. The unspeakable horror Abdul Quader Molla wreaked on his innocent victims was that they wanted to live as free human beings in their own homeland. But Abdul Quader Molla wanted them to continue to be slaves of the corrupt generals of then West Pakistan. We will not go into the details of what Jamaat-e-Islami did to the people of East Pakistan, now Bangladesh, because it is all available on the Internet. What we would like to note is the sheer insane and arrogant reaction by the Deobandis and Takfiri-Deobandis in Pakistan to the hanging of a super terrorist who was also a third-rate human being.

Led by Pakistan’s pro-Taliban Interior Minister Chaudhry Nisar Khan, the Takfiri-Deobandis not only condemned the hanging, but also justified the rape of thousands of Bengali women and mass killing of Bengali men, women and children. Chaudhry Nisar Khan spoke for his government when he termed the hanging unfortunate and a tragic step. “There was no doubt that Molla was hanged because of his loyalty and solidarity with Pakistan in 1971. . . . Every Pakistani is saddened and grieved over his death. . . . It would have been better if the Bangladeshi government had shown farsightedness‚ large heartedness and magnanimity instead of opening old wounds. (Read: http://tribune.com.pk/story/645071/nisar-expresses-grief-concern-over-bangladesh-jamaat-leaders-execution/)

Chief of Jamaat-e-Islami Pakistan and pro-Deobandi cleric, Munawar Hassan, decried his Bangladeshi comrade’s execution as deplorable. In a stement published in Pakistani newspapers, Munawar Hasan said: “Molla embraced martyrdom with a smile on his face. His unflinching spirit is commendable. His execution at the hands of a “slanted” war tribunal is nothing but a mockery of justice”. Going forward, JI Ameer also picked apart the government of Pakistan for being ‘criminally silent’ over Molla’s unjust hanging. He added that Molla indeed became a victim of patriotism. (Read: http://www.thenews.com.pk/article-130104-Mollas-execution:-JI-to-stage-Pakistan-wide-protests-today) 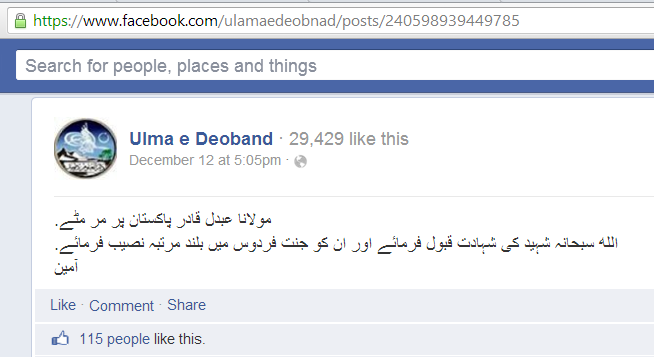 Just for record, here is a brief snapshot of crimes of the rapist-murderer who is being eulogized by Deobandi clerics and politicians in Pakistan:

“They banged her two-year-old brother against the floor until he died, her two sisters were slaughtered, another was raped, and her pregnant mother was shot dead. She lay hidden beneath a cot, transfixed, numb with fear, watching these ghastly scenes being enacted before her eyes. She struggled in vain to not shout but gave in to the horrific incident and let her pain come out loud. Then, it was her turn, to be brutally raped. In the evening of Mar 26, 1971, Jamaat-e Islami leader Abdul Quader Molla and several other Biharis forced into the residence of Hajrat Ali Laskar in Mirpur. Ali was shot at, his pregnant wife and her two daughters aged 7 and 9 years were slaughtered.” (Read:  http://bdnews24.com/bangladesh/2013/09/19/momena-seals-mollas-fate)

In Dhaka, a city of 20 million people, “at least four car and a motorcycle” is violence for a pro-Taliban publication like The News! But The News was not alone in sensationalizing the non-event of the pro-Jamaat-e-Islami ‘violence’. Urdu daily Jang, a sister publication of The News, did the same. It reported that protest rallies were staged all over Pakistan, as if a Pakistani had been killed! Jang informed its readers that the entire country of Bangladesh was rocked by protests resulting in a number of killings. The ‘high’ number of protesters killed, by Jang’s own admission, is six! (Read: http://jang.com.pk/jang/dec2013-daily/14-12-2013/main.htm)

Similarly, the far-right Nawa-e-Waqt came up with front-page coverage of the death of the Jamaat-e-Islami rapist-mass murderer. Like The News and Jang, it cited that all over Pakistan, people protested the killing and offered funeral prayers for the man (Read: http://www.nawaiwaqt.com.pk/E-Paper/Lahore/2013-12-14/page-1/detail-20). In its editorial Nawa-e-Waqt wrote, “This is not what happens in civilized societies” (Read: http://www.nawaiwaqt.com.pk/editorials/14-Dec-2013/265362). What about the rape and murder of hundreds of thousands of Bengali men and women? Certainly that was a hallmark of a civilized army and its Deobandi-Salafi supporters.

But it were the Deobandis columnists who truly cried foul in support of the rapist-mass murderer. For instance, Ajmal Niazi, a right-wing columnist and conspiracy theorist, claimed an Indian conspiracy behind the hanging. Holding Hasina Wajid responsible for the hanging and calling her a stupid woman, he dubbed the hanging “a shameless affair”. He went on raving and demanding, “Pakistan must not sit silent over the hanging and act. Otherwise it will cowardice on our part” (Read: http://www.nawaiwaqt.com.pk/columns/14-Dec-2013/265545)

Another columnist, Nawaz Raza, said, “The death of Abdul Quader saddened Pakistani politicians. In the National Assembly and the Senate, legislators were a picture of gloom and sadness over the cruel act of the Bangladesh government’s hanging of the man who fought for the existence of Pakistan” (Read: http://www.nawaiwaqt.com.pk/columns/14-Dec-2013/265396).

But it was two infamous Takfiri-Deobandi journalists who shed tons of crocodile’s tears. Oraya Maqbool Jan, the most infamous Takfiri-Deobandi journalist, wrote a column on Abdul Qader Mulla’s hanging which can be considered a landmark in the history of journalistic absurdity. It is a must-read column which is comprised of voodoo history, alchemy, and necromancy. Only a separate editorial, indeed a research paper, can deal with. But we would cite just one claim he makes, “On account of Pakistan’s having been hijacked by certain elements, not many eyes in the country have shed tears on the hanging. Those eyes which are not shedding tears on the death of those who sided with the Pakistan army, will not shed tears for those who have supported the Pakistan army in Baluchistan and Swat” (Read: http://dunya.com.pk/index.php/author/orya-maqbool-jaan/2013-12-14/5342/26526939#.UqxJi_QW1Wl).

Another Deobandi columnist, Khalid Masood Khan, used extremely flowery Urdu to mourn the hanging of Abdul Quader calling it “a heart-rending death of the man who was hanged by a kangaroo court for being a support of the Pakistan army and the Two Nation Theory” (Read: http://dunya.com.pk/index.php/author/khalid-masood-khan/2013-12-14/5346/77423249#.UqxOr_QW1Wl)

Scores of examples can be given showing how Pakistan’s Deobandis have reacted to the hanging of a mass murderer. The point is: No Takfiri-Deobandi has said a word about the hundreds of thousands of innocent Bengalis killed for their ‘crime’ which was their just and legitimate demand to live as free people. Pakistan’s National Assembly led by Nawaz Sharif’s Pakistan Muslim League, an ally of Sipa-e-Sahaba (ASWJ) and the Taliban (TTP), offered prayers for the rapist-mass murderer. It is the same Takfiri-Deobandi mindset which has allowed the massacres of Shias, Sunni Barelvis, Ahmadis and Christians in Pakistan. This mindset has no respect for human rights and people’s right to self-determination. The only evil the Takfiri-Deobandis see is the opponent who happens to have a different view than theirs. 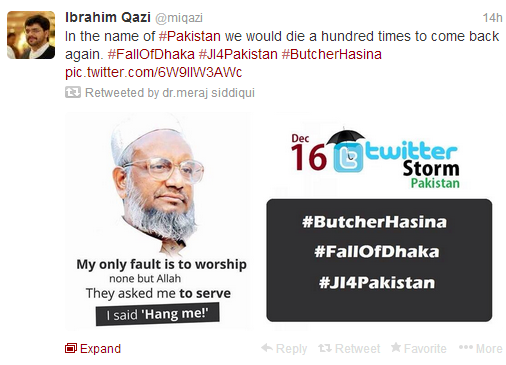 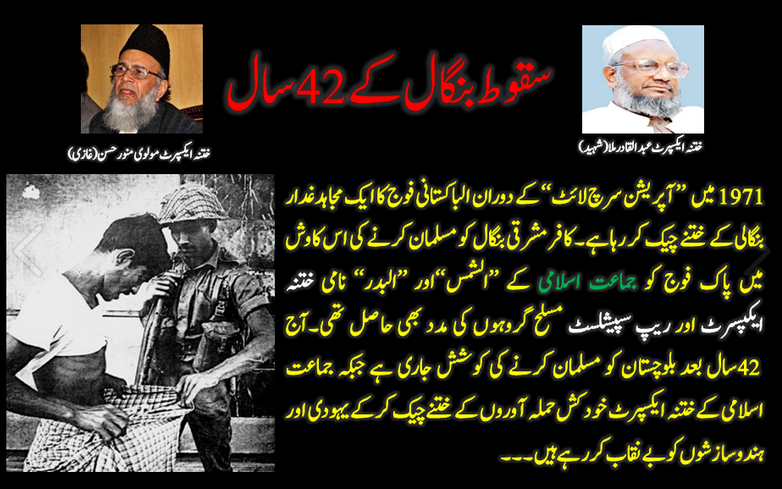