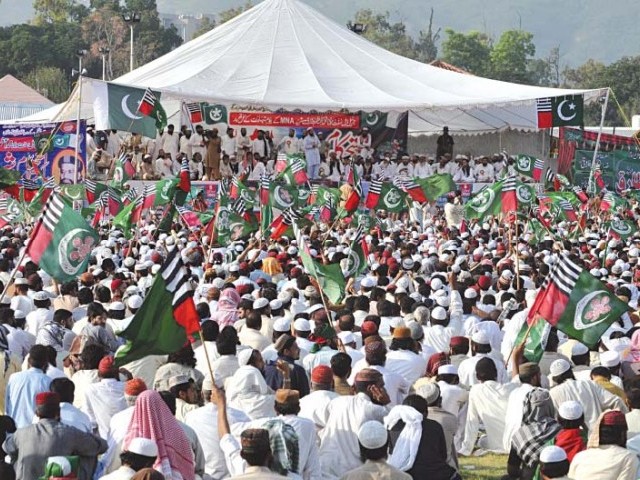 Outrageous is the word that should be used when referring to the recent protests by ASWJ. Loss of life in any circumstance is tragic. But blaming other sects for inciting violence is shocking, considering the fact that the ASWJ, along with LeJ has thrived on sectarian divides, and has not been averse to exploiting them. Such a policy cannot be without repercussions.
This week, in Karachi, ASWJ decided to protest against the breakdown of law and order, manifest in the murders of their members, at an international book fair. Their reasons for choosing this site, in front of the Expo Center, while the fair was in full swing, were revealing. The claim was that the book fair was allowing a stall organised by a “particular neighbouring country” (read Iran) to propagate sectarian differences and was borderline ‘hate speech’.
That’s a bit rich coming from those encouraging discrimination among sects for a living. It gets even funnier considering that there were reports that a ‘certain banned group’ (read LeJ) were seen distributing literature filled with hate speech against Shias at the book fair. Given that the administrator of the book fair also belongs to the Deobandi sect, the claim made by ASWJ seems even more flimsy. To top it all off, ASWJ decided to do this in the presence of foreign visitors. Great work to promote Pakistan’s image as a peace-loving nation. Good job.
Next time, before deciding that the need of the hour is to raise a hue and cry, maybe ASWJ would do well to just reflect on everything they stand for. They support sectarianism, call for Sunnis to be wary of other sects and preach hate — all with impunity — and yet, they still feel that they are the victims? The state is failing by not being able to find any clues to the targeted sectarian killings that have started since the Rawalpindi incident. Criminal negligence on the part of our government is costing us dearly. But the regime is not responsible in and of itself, for printing and distributing material promoting hate and intolerance; those accolades go to the ones that continuously tell the people that their sect is better than the others and hence, more deserving of rights and protection. The government’s job is to clamp down. It’s time to follow ASWJ’s advice, and perhaps point their own suggestions at their organization first and foremost. Lord knows they need it.