Moral Action: From Knowledge to Wisdom – by AZ 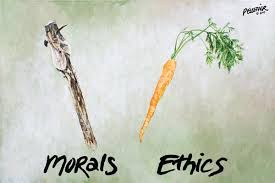 Moral action in us is driven by the desires in relation to the objectives that we consider as ‘good’. Even though we all pursue our desires how do we know, in the event of conflicting desires, which way to go?

This conflict can pertain to one individual or to the desire of one person against that of another individual for a similar objective. We all know that in a world which knows no scarcity there would be little problem of evil. But in a world of struggle and toil, strife and tears are normal. To not to desire is to cease to live, hence the best solution is to transcend the desire as explained by Ali Ibn Abi Talib. We can only transcend by knowing the relative value of desires to determine what is more valuable in the moral sense. Ali says that choice is the function of knowledge as it informs and guides the will. Another view, advocated by Buddha, is to seek Nirvana by achieving the extinction of desire. The problem here is that the extinction of desire itself is a desire and the desire thus remains. What is then the goal of moral endeavour? We must answer this question in order to be able to determine the moral worth of conflicting desires.

Conventionally, the end of moral action was the perfection of the individual and the achievement of the self-realization. Then the ethical idealism was reconciled with the pursuit of happiness and pleasure. Hence, the utilitarian thought talked about the greatest good of the greatest number. With the progress of biological sciences, it was further evolved into ‘the promotion of the welfare of the race’. With the current level of human progress and liberation of intellect, the problem of morality cannot be regarded in the spirit and manner as traditional societies saw. With all the theistic foundations of moral action having been undermined we have to redefine the moral law in consonance with the existing scientific knowledge. Supernatural sanctions of moral obligations are no longer regarded seriously and it no longer avails the modern man that we need to be ‘good’ just to please our Creator. Inducing belief in the supernatural creates scepticism in the modern mind. Modern mind is cultured to believe based on evidence.

Indeed, there are those who truly believe in a Supreme Being as the preserver of the moral order. For them the moral problem does not pose any tormenting questions. They look to do His will. However, there is a large section of present day world which is not satisfied that any such Power exists and for them a ground has to be discovered to justify moral action as the threat of supernatural sanctions will not do in their case.

Scientists are the first to acknowledge that the findings of the modern sciences are not final as scientific knowledge progresses on shifting conclusions and transformed findings.  Thus a scientific knowledge of human nature is not sufficient. However, there are certain recognized truths which are now viewed as incontestable. We can start with them to establish what is right in human conduct and what is wrong. Modern biology and psychology teach us that the passage within an individual’s life span from infancy to maturity is about dominance of momentary pleasure and pain giving way to the control of reality. This makes one’s life a process of securing adjustment between external environment and one’s internal processes.

The constant change in the environment, though, demands that the individual understands its laws and behaviour to be able to design intelligent conduct that can meet all possibilities. This is further complicated by the fact that the individual himself is also changing biologically and psychologically from childhood to old age. Moreover, with the growth of experience and knowledge the inner life of an individual becomes more elaborate and complex. The power of instinct gives way to the power of consciousness. The challenge, therefore, is to integrate man’s internal world with his external world to secure permanent moral bearings. Widening and deepening the consciousness is a blessing. The Prophet of Islam’s prayer till his last moment was, “O God! Increase my knowledge”. Only by the light of higher consciousness can a grown-up man rediscover that state of bliss which was his in his life of instinct as a child. A sage and a child both have a relationship of perfect harmony with the world; they don’t expect anything of world which it cannot give. Both of them are at peace within and without. The difference is that with a child that relationship is unconscious and with a sage it is conscious as the sage has reached a richer harmony with all that is there through a conscious endeavour.

This adjustment is the goal of all moral effort. Walter Lippman has rightly said that the process of growing lies in a revision of a man’s desires in accordance with his understanding of reality. The choice lies in either fleeing reality by taking refuge in delusion or seeking fusion with reality. Only the second attitude is positive because no one can flee reality in the absolute sense. In the end man cannot escape from himself, no measure of intoxication or daydreaming does the trick. Therefore, in the absolute sense there is no such thing as running away from life. Asceticism is a method of overcoming immaturity and can be used only as a temporary measure for the education of soul. Where consciousness has succeeded in synchronizing desires with reality, asceticism is not needed.

The positive attitude consists in becoming detached, understanding reality, and being aware of one’s limitations. All understanding is a creative process. When we understand something we are no longer its slave. A profound understanding of the reality transforms it. For example, a trained musician hears in music what we can’t hear. It is the transforming power of creative understanding that shapes a new world for man. Human character is a complex thing. The problem is that often we participate in the affairs of an adult with the attitude and manners of a child. The real purpose of education is to attain the harmony of the internal with the external life and help us grow beyond the child in us. A really evolved mind sees things in their proper perspective and is aware of its limitations. Human history is testimony to the fact that men having to deal with the world for which they are not inwardly prepared leads to misery.

Hence, I argue that it is possible for each one of us to form a harmonious relationship with reality through the help of knowledge. Similarly our morality also has to seek adjustment to the world of reality through conformity to different codes of behaviour in different situations of life. In order to live life intently and to its fullest potential, we must boldly face all the varying demands its places on us during its course. There is no such thing as a practical guide to living. What we need the most to live life to fullest potential is wisdom. Wisdom is not merely about understanding the mystery of life; it is about the ability to apply to the practical details of everyday living the universal principles of a wise and noble conduct. Only knowledge that leads to wisdom expands man’s outlook on the ultimate questions of life for living a noble and valuable existence.

20 responses to “Moral Action: From Knowledge to Wisdom – by AZ”