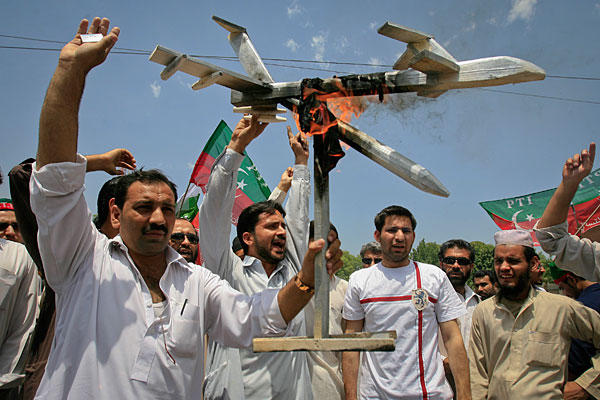 Taliban apologists (PTI, Jamaat Islami, PMLN, JUI, ASWJ-LeJ etc) often blame drone attacks as a major cause of Taliban violence against Pakistani civilians, police and army. As per their logic, the cause for 50,000 dead Pakistanis due to indiscriminate attacks is because of drone attacks on the Taliban.

Then why are these people so upset by the alleged reaction of Shia Muslims and Sunni Barelvis at Rawalpindi against members of banned Deobandi terrorist outfit ASWJ?

After hearing Imam Hussain and the family of the Holy Prophet abused by the Deobandi cleric, after having stones thrown at them followed by bullets and in the background of lifting thousands of their own dead, the Shias and Sunni Barelvis retaliated by killing three ASWJ-LeJ activists hiding in the Deobandi mosque!

The Shia and Sunni Barelvi response is not even proportionate to their own casualties. If 3000 drone victims which include nearly ninety percent of mass murdering terrorists and foreign Al Qaeda mercenaries justifies the indiscriminate slaughter of 50,000 Pakistanis, surely the Shias and Sunni Barelvis have a long route ahead in terms of settling scores – if one were to go by the warped logic of Imran Khan, Jamaat Islami and the PML N.

On a side note, it is equally amusing to see the hypocritical condemnation of Shia and Sunni Barelvi mourners of Imam Hussain by those fake liberals who find no qualms in condoning drone attacks on FATA. Based on their logic, drone attacks on TTP-ASWJ hideouts by USA/NATO are kosher but death of 3 Deobandi ASWJ terrorists in Rawalpindi in an act of self-defence by Shias and Sunni Barelvis is not!