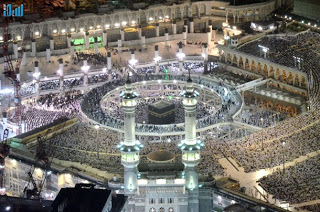 All Muslims must perform a holy journy to Mecca, Saudi Arabia, once in their lifetimwe to fulfil a mandatory relegious duty Commanded by Allah (swt). Elderly, frail and people with little or no financial means are of course exempted from this very sober and sacred requirement. Once present at the sites of this most pious activity, the Hujjaj are mandated to behave in the most righteous and noble manner , never astraying from a total control of their demeanor as well as their discourse. A minimal deviation from these rules must be compensated with a Kuffarra, a form of punishment. Also, the holy Quran pounces through numerous verses that the sanctity of the tradition of Hajj and its proper completion can only be be accomplished by manifesting religious attiquates. No arguments and discussions of disparaging and deleterious nature are permitted by Allah (swt) at any time during this glorious journey.

For the past several years, the global Hujjaj visitors in general. and the Shia Hujjaj in particular have been experiencing an onslaught in terms of outright nasty and nefarious treatment by the Saudi governmental authorities towards them. The relegious police, also known as Shurtas are planted a few yards away from each other monitoring even the manner with which a Haji sneezes. The purpose of this pinpoint surveillance is to not only control the crowds, but to suppress the wishes of those Momineen who engage themselves with offering Fateha and other supplications at the grave sites of the Prophet (pbuh), his companions and the members of his progeny. The believers are pushed and shoved, cursed and humiliated, and at times arrested by these shameless Shurtas at almost every phase of this pilgrimage.

This year’s Hajj turned out to be the most dangerous and horrific experience, particularly for the Shia Hujjaj hailing from Europe and North America. According to the personal accounts provided by several Shia Hujjaj groups, and to a large extent, substantiated by certain Arab print and broadcast media outlets, a vicious and vindictive gang of almost 115 Salafis from Lebanon, most of whom are now expatriates in Australia, began taunting and scolding Shia Hujjaj for being Kafir and Najis. When Shia Hujjaj reacted to this unexpected abuse, acts of violence perpatrated by these Satanic Salafis ensued. Saudi intelligence apparatus on the ground started looking in the other direction simply because their gutless goons from Lebanon were doing their job and doing with far better efficiency and effectiveness. Rafadoons were being avenged for their alleged crimes in Syria and Lebanon. Shia Hujjaj who were impacted by these acts of violence at the hands of Lebanese hoodlums filed complaints with the Saudi authorities but to no avail.

As if the cruel and criminal treatment exhibited so consistently by the Saudi authorities towards the Shia Hujjaj community was not enough, now the infusion of the Global Salafi terrorist gangs in holy places of Islam is a matter of extremely serious concern. Entities such as Arab League, and Organization of Islamic Conference (OIC) as well as the United Nations must be contacted to facilitate some sort of resolution to this torture and travesty upon Shia Muslims on an annual basis. Saudi Arabia is an evil empire, so rich and so arrogant that it quite certainly will turn down any third party mediation. In that event, the global Shia Muslim community is left with no real plausible option except to forgo this mandatory duty until such time that the Satanic Saudi regime ceases to exist !