Baloch men and women have taken to the road in a protest over apparent kidnappings by Pakistan army and its various agencies (ISI, Frontier Constabulary etc). They are demanding the Pakistani government locate and return hundreds of Balochs allegedly abducted by security agents. 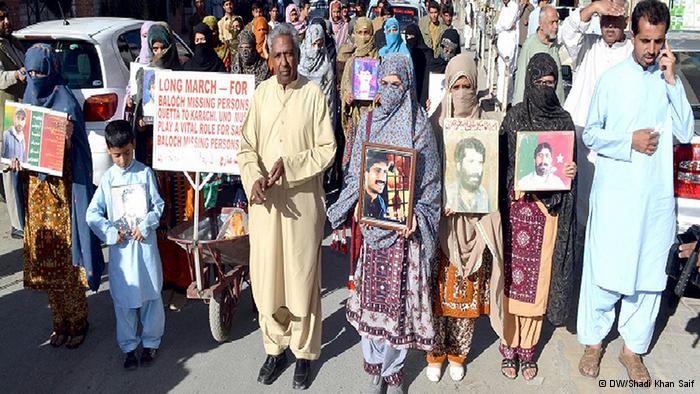 Since the creation of Pakistan in 1947, a small group of Baloch nationalists have been in conflict with the federal government.

The 700-kilometer (430-mile) march, from Quetta to Karachi began on Monday and was expected to take two weeks.
Local rights groups have the details of 8,000 people who they say were disappeared over the past ten years and have not been seen since.

According to the Asian Human Rights Commission (AHRC), 23 bullet-riddled bodies were discovered in January 2012. From August 2011 to January 2012, 56 Baloch people are known to have been murdered and dumped on roadsides, according to AHRC.

The Voice for the Baloch Missing Persons (VBMP) indicates the number is much higher.

The province of Balochistan is Pakistan’s poorest and least populous.

The armed struggle for Baloch independence intensified after the killing of influential Baloch leader Akbar Bugti in 2006 in a military operation. Rebel Baloch fractions like the Balochistan Liberation Army have repeatedly attacked security forces and state installations. Most of the rebel leadership is thought to be abroad in the UK, Afghanistan and Dubai.

Disappeared, even in the media
The issue of missing persons remains highly sensitive as far as its media coverage is concerned. Baloch journalist Saeed Sarbazi considers himself lucky to be alive. He was had been advocating for the rights of Baloch people before he was abducted last year by “unknown” men.

Talking to DW he said: “They blind-folded me and kept me in a locked cell. They interrogated and tortured and forced me to stand all the time. I told them that I don’t have any links with any terrorist or militant groups working in Balochistan. I’m just a journalist. I used to help missing persons’ families who come and sit in the camp.” Sarbazi was released after a month.

Despite vast natural mineral reserves in Balochistan, its inhibitors remain the poorest in Pakistan.
The prolonged insecurity has left its marks on the socio-economic aspects of the Baloch community, which makes less than five percent of Pakistan’s total population.

Usually the tribal chiefs and highly influential figures have been ruling the Balochistan government. But for the first time in the history of Balochistan government, a working-class politician was elected as the chief minister in June this year. The appointment of Dr. Abdul Malik raised some hopes for many, but this first-non tribal leader admits his limitations when it comes to the issue of missing persons and federal security agencies.

“I admit my failure on the issue of missing persons. I have repeatedly raised this issue and highlighted that without resolving it, we cannot proceed any step further towards peace dialogues [with rebels]. But unfortunately there has been no progress.” Malik said talking to journalists in Karachi this week.

Betrayal of trust
Sources say the matter is directly linked to Pakistan’s security establishment and that politicians do not have much say in such matters.

The separatist forces on the other hand rules out any dialogue. A separatist leader Abdul Hakim Lehri told DW said that the Pakistani establishment has “betrayed” the Baloch people on various occasions and they can therefore no longer be trusted.

According to the VBMP founder Abdul Qadeer Baloch, participants of the long march will be travelling for 15 days from Quetta to Karachi. Family members of missing persons from other districts will join the march along the way.

“We are coming to Karachi to register our protest and highlight our issue,” he said speaking via telephone.

This isn’t a march to secure justice because the relatives of missing and dead had sought all avenues but were let down by all including the Supreme Court (SC) which has been long on rhetoric and miserably short on action. This 700 plus kilometer journey which the relatives of the missing and dead have undertaken is to highlight the injustices to Baloch people. The agencies, the army and Frontier Corps (FC) naturally couldn’t be expected to provide justice because even the most partial SC reluctantly admits that these are responsible for the missing and the mutilated dead. The civil society is expected to stand up for human rights violation but their enthusiasm regarding missing Baloch persons is quite uninspiring.

Mama Qadeer is surely a brave and dedicated person he is there because his son Jalil Reiki, information secretary of Baloch Republican Party, was taken away by the agencies on February 13, 2009 who believed in and worked for achievement of rights of Baloch. Mama Qadeer knocked every possible door and explored every option for securing his son’s relief; he was assured, threatened and cajoled but Jalil did not turn up. For thirty three months he was missing then at end of November 2011 came the news that his body had been found. Apart from the inhuman torture meted out he had been shot three times in his heart; the heart which his vicious enemies had been unable to subdue. Jalil’s son carries the picture of his father at the head of this march.

The number of my students and friends who have been victims of the establishment’s ‘dirty war’ since 2005 is around twenty now and include Zaman Khan Marri and Raza Jahangir aka Sheymureed Baloch the Secretary General of Baloch Students Organization (BSO) Azad. While among the many missing are Ali Khan Marri, a gunsmith par excellence, and Dr. Akbar Marri. The list and pain keep increasing.

This isn’t an ordinary march because it is the expression of the pain and sufferings of the families of the many thousands missing and of 700 plus who have been victims of death squads and who suffer in silence. Each step of the protestors is an indictment of the ‘dirty war’ that has been unleashed against the Baloch so that the Baloch resources can be remorselessly plundered and the 65 years of injustices perpetrated by the Pakistani establishment on excuse of ‘national interest’ and involvement of ‘foreign hands’. Hopefully this historic protest march led by Mama Qadeer will like the movement of mothers of ‘Plaza de Mayo’ will at least awaken those who seem oblivious to Baloch sufferings.