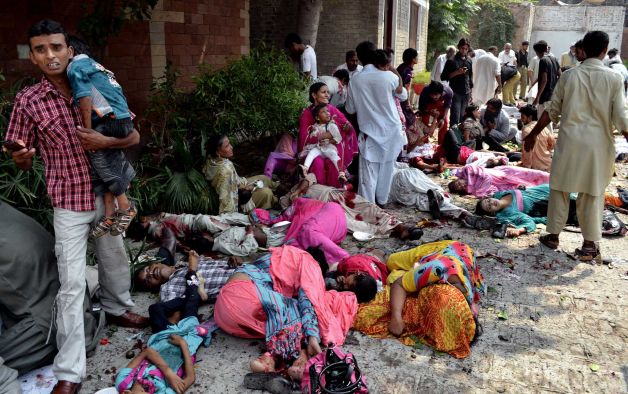 Pakistan is yet again at crossroads after two brutal suicide attacks on Christians in Peshawar on 22 September 2013. Previously, around forty people died and hundreds were injured in a suicide attack on Shia town in Karachi during March. Earlier, on January, 10, 2013, 82 Hazara Shias were killed and over 200 were injured in two separate bomb blast near Alamdar road, Quetta. According to South Asia Terrorism Portal, 84 Shias belonging to Hazara tribe were killed and around 200 were injured in February 26. Owing to malfunctioning of state machinery and proactive terrorist organizations, genocide of minorities in Pakistan has become a routine.

Bhutto, the self-declared liberal politician of Pakistan, constitutionalized religion by declaring Ahmadis non-Muslim. Later on, dictator Zia institutionalized it and thousands of Pakistanis have been paying huge price since then.
Pakistan has gradually turned into hell for its own citizens and a safe haven for foreign jihadi militants. Dream of Pakistani establishment to conquer Afghanistan and India through their tunneled-vision strategic depth has not been fulfilled, but many innocent citizens inside the boundaries of Pakistan have lost their lives, honor, dignity and hope for better future because of the very strategic depth.

The rallies, protests, mobilizations can play a little role in awakening the dead conscious of Pakistanis. Leaders of top militant organizations should be tried without further delay. Pakistan should at least learn from two South Asian countries – Srilanka and Bangladesh in this regard. Civil Society Organizations should rethink their agenda to develop a working relationship with religious organizations. Their mutual understanding and collaboration can be used effectively in learning from each other and eradicating the menace of fundamentalism. Pakistani education system needs to be overhauled completely. Hate Curriculum should be replaced and a curriculum preaching cosmopolitan ethics based on Sufi teachings of love be introduced. Along with Muslim heroes, the services of minorities for Pakistan should also be given proper space in the curriculum.