Home  »  Featured • Original Articles   »   Why is Saudi Arabia Angry With The UN? – by Ali Hashim 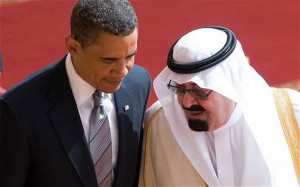 The New York Times reports that “Saudi Arabia stunned the United Nations and even some of its own diplomats on Friday by rejecting a highly coveted seat on the Security Council, a decision that underscored the depth of Saudi anger over what the monarchy sees as weak and conciliatory Western stances toward Syria and Iran, Saudi Arabia’s regional rival”.This refusal raises several questions?Surely the Russian sponsored deal whereby the Syrian’s agreed to destroy their Chemical Weapons under UN supervision cannot be bad for the region. Also the possibility of Iran coming back into the fold of the international community with safeguards that would ensure that they would not develop a nuclear weapon has to be a good outcome for the World.One also notes that all of a sudden the Syrian war seems to have come to an end. While this is a welcome relief to most people around the world and specially the Syrians themselves, surely the Assad regime’s use of CW was not the only factor that had fueled this conflict. What happened to all those freedom fighters who had sworn to overthrow the Alawite Syrian regime and establish an Islamic Caliphate in Syria. Have their objectives also been fulfilled? What has happened to the Hezbollah fighters who were said to be spearheading Assad’s efforts to crush the rebels?

One can understand the reasons for some of these developments. The Russians may have pressured the Syrian’s to ease off on their actions against the rebels in exchange for averting the certain US missile attack. But why did the Syrian rebel fighters also suddenly go quite?

While there is little doubt that Assad is a dictator, Saudi anger against Assad could not be just due to the non-democratic nature of the Syrian regime. Only recently they have come out in favor of the military regime which toppled the democratically elected President Morsi in Egypt.

It therefore appears that a lot, though not all, of the opposition to the Syrian regime was orchestrated by the Saudi Regime and the Gulf States who, with Turkish and Jordanian support, had egged the US on to attack Syria in the hope that Assad a key Iranian ally would be toppled and they would be able to establish a pro Saudi regime there.

Israel is another country which is not very happy at these developments. While they were not too excited about the Al-Nusrah brigade and their ambitions in a post conflict Syria, they were hoping that that US intervention in Syria may provide an opening for widening the conflict to include Iran and taking action against their nuclear assets.

With the Russian sponsored initiative at the UN on Syria, the dream of toppling Assad has been put on hold. To further complicate matters, the new Iranian President’s moderate stand on negotiations with the West regarding their nuclear program has postponed the prospects of military action against Iran.

So was all this just a petty Shia- Sunni conflict? But Assad is not really a Shia. He is an Alawite whom the Asna- Ashari Shias refuse to acknowledge as one of their own. In fact his is a secular Baathist pretty much like the Late Nasser in Egypt and Saddam in Iraq, who were not much of anything.

Therefore it seems that the real conflict is between Saudi Arabia and Iran. These two countries have a religious agenda in addition to their political agendas. They are Wahabi/ Salafi and Shia respectively.

To an outsider they are welcome to their respective religious faiths and will be answerable before God about these beliefs. One wonders however, why does the world have to bear the brunt of their sectarian feud ?

Can we not go beyond this ancient disagreement between two Muslim sects, like the Catholics and the Protestants have in the Christian world and concentrate on the welfare of ordinary people in these countries and elsewhere? Surely the oil wealth of Saudi Arabia can be put to better use than fueling sectarian conflicts around the world.

It is discouraging to note the Saudi petulance demonstrated by their refusal to take the UN seat. In this polarized world where different nations and individuals have widely differing viewpoints and interests, multi-lateral forums offer the best possibility of negotiating on and settling conflicts with the help of advice from other members who are not directly involved in the conflict.

Can we hope that better sense prevails and the Saudis reconsider their decision? Why is Saudi Arabia angry with the UN?

Saudi Arabia has been throwing a diplomatic temper tantrum lately, threatening a “major shift” away from the U.S. over differences on Iran, Syria and other issues. The Obama administration can relax.

Trouble has been brewing in this relationship for years. Saudi Arabia was aghast at PresidentBarack Obama’s support for the 2011 Egyptian revolution, which overthrew another old U.S. ally, former President Hosni Mubarak. It was aggrieved, too, at the lack of U.S. support for that year’s Saudi-led intervention to put down a pro-democracy uprising in Bahrain.

More recently, in July, the Saudis took issue with U.S. criticism of the military coup that toppled Egypt’s freely elected Muslim Brotherhood regime. While the Saudis pledged billions of dollars of support for the thinly disguised junta that took control in Cairo, the U.S cut aid to undermine it.

Now the Saudis are fretting that rejuvenated U.S.-Iranian nuclear diplomacy might lead to a wider rapprochement at their expense. Above all, the Saudis have lost patience with Obama’s hesitance in arming the rebels who are fighting President Bashar al-Assad in Syria, an Iranian ally. The final straw appears to have been U.S.’s decision to cancel planned missile strikes to punish Assad for his use of chemical weapons, and Obama’s support for a Russian-backed disarmament plan and peace talks.

This list of grievances has led the Saudis to direct a series of angry gestures at Washington, beginning with their refusal to address the United Nations General Assembly in New York last month. Then last week, in an unprecedented step, Saudi Arabia rejected the offer of a prized seat on the UN Security Council. This week, the Saudi intelligence chief, Prince Bandar bin Sultan, reportedly told European diplomats that the kingdom would stop cooperating with the Central Intelligence Agency in Syria, and would work with Jordan and France instead.

Other Saudi officials have said the country will no longer feel constrained to arm only moderate, U.S.-backed Syrian rebels, and hinted that it would look for new suppliers for its own weapons needs, other than the U.S.

Saudi Arabia is shooting itself in the foot. Spurning a seat on the UN Security Council has deprived it of an important platform and will make no difference to Russia’s and China’s support for the Assad regime. Nor will refusing to cooperate with the U.S. make Obama fall in line with the Saudi goal of an absolute rebel victory in Syria. Instead, the White House probably will become even more skeptical of the increasingly fragmented Islamist opposition forces and of Saudi Arabia’s reliability as a partner in Syria.