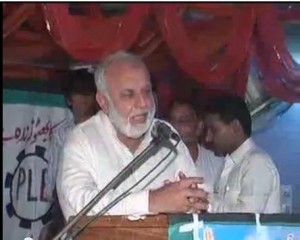 President of People’s Labor Bureau Punjab and my uncle, Sardar Sher Ahmed Khan has suddenly passed away at the age of 59 years, and leaving behind a legacy of insurmountable selfless politics for the rights of poor laborers of Pakistan. He was a legend in his own-self. He was the one who suffered a lot throughout the years of Zia’s dictatorship. An avid reader of Karl Marx, a true comrade and a determined soul, who withstood his principals of politics with service, throughout his political career of more than 35 years.

He was a close confidant of late Benazir Bhutto and at the time of her assassination the shawl she wrapped around was given to her by uncle Sher Ahmed. When I see people talk about the corruption of politician and I so vociferously defend it in certain social gatherings, it is because I have seen people like him. Whether his party ( PPP ) was in power or not in power it wouldn’t make any difference to him. He was always under fire by his party or the opposition, because of his stance against the ills of, as per him, the Capitalism and the Capitalist. At one point, when he was the president of All Pakistan hotels association and Saddruddin Hashwani, expelled some workers from his hotels, Malik Sher Ahmed took a stance that even the affected employees couldn’t match. A promise to not to step in home till the sacked workers are not reinstated. It cost him and his, at that time, two years old daughter, seven years, till Zia-Hashwani duo budged to his demand.

People talk about corruption, during BB’s exile period she asked for him in London twice. No business he had, so had to sell his agricultural land to arrange for the air-fare and expenses. Not accepting a penny from the party fund. He inherited quite impressive land, but now at the time of his death 90 percent has been sold by him to run his personal expenses and party services. During the times of PPP in power he never desired any personal economic uplift nor anything for his family. His close relatives were angry that he didn’t arrange any job for them. But he wasn’t such soul to hover for petty things, he was way beyond all these trivia.

A rare among the breed of devoted political workers, is no more with us anymore. He set new trends and redefined politics as service. Mamoo you left us very sad. Hope the new trends in your first and last love, the PPP, would value your services. Such politics-service mutation is rare.

I am very sad today, recalling our conversations that would some time spanned over entire nights. Also I remember the days when I would need to carry his family messages without knowing where he would be at that time- Islamabad, Lahore, Pindi or Karachi. Today it also reminds me of his time in incarceration during Nawaz Sharif’s first and second tenure. When he was arrested during Musharraf times, for opposing the dictator, I wasn’t there but later I got stories, which were funny and touchy but I am sad today.