Home  »  Original Articles   »   The word “Taliban” will not slip from his mouth! – By Mahpara Qalandar 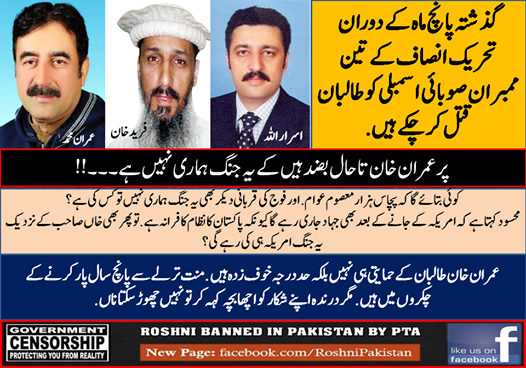 We are reproducing a news report below. It gives details of Imran Khan’s reaction to the killing by the Taliban of his own minister. We remind the LUBP readers that when Zohra Hussain was killed in Karachi on the eve of national elections in May, Imran Khan went mad blaming the MQM for her murder. Today he lost his third MP to the bullets of the Taliban. But like before, he has not uttered the word “Taliban” let alone condemn them. This shows how extremely stupid and equally dangerous he is. Even when he refused to name the Taliban, he refused to even call the murderers what they are: murderers.

Imran Khan is a broken reed. The people of Khyber-Pakhtoonkhwa voted him hoping that he would bring peace. But all he has done is get allied with the Jamaat-e-Islami and shout “Taliab are our brothers!”

It is time to confront Im the Dim. 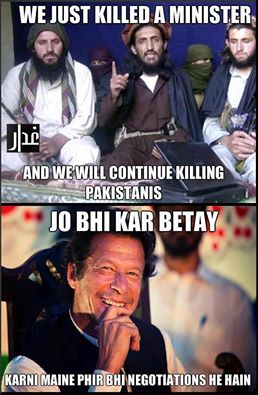 PTI Chairman Imran Khan said he was in his constituency when he got the news.

http://tribune.com.pk/story/618958/reaction-to-gandapurs-killing-imran-asks-govt-about-apc-implementation/
RAWALPINDI: Terming the people and the government in Khyber Pakhtunkhwa as front line targets after the Pakistan Tehreek-e-Insaf (PTI) lost its third MPA in less than six months, the party chairman Imran Khan implored the federal government to implement the political consensus arrived at in September’s All Parties Conference.

He asked why has the government not acted on the decisions decided upon in the APC.

Imran said that he had received the news while he was meeting people in his own constituency of NA-56 in Rawalpindi, much like Gandapur was doing in his constituency of PK-68. He added that the news had left him stunned. The PTI chief recalled that he had last met Gandapur at the peace cricket match held in Peshawar on Sunday.

He further prayed for the two children, wife and parents that Gandapur left behind.

Imran also reportedly cut short his trip around NA-56, an emergency press conference over the attack and is scheduled to travel to DI Khan.

Gandapur was at his home in Kulachi, about 45 kilometers west of DI Khan. He was greeting visitors who had called upon him to wish him Eid. The blast, described by police as a suicide bomb, killed at least nine people and injured 30 others. He is the third PTI MPA to be killed since the May elections. Previously PTI MPA from Hangu Farid Khan was gunned down on June 3. Farid had won the PK-42 (Hangu-I) seat as an independent candidate and had then joined Pakistan Tehreek-e-Insaf. MPA Imran Mohmand and 29 other people were killed when a suicide bomber blew up during a funeral in the Shergarh area of Mardan on June 18. 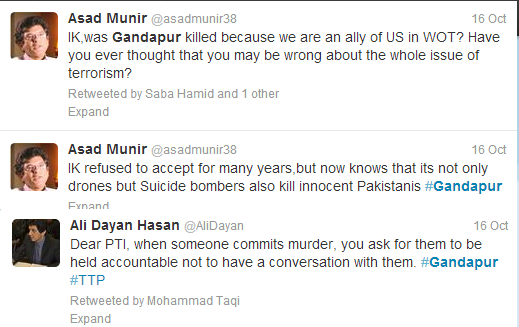 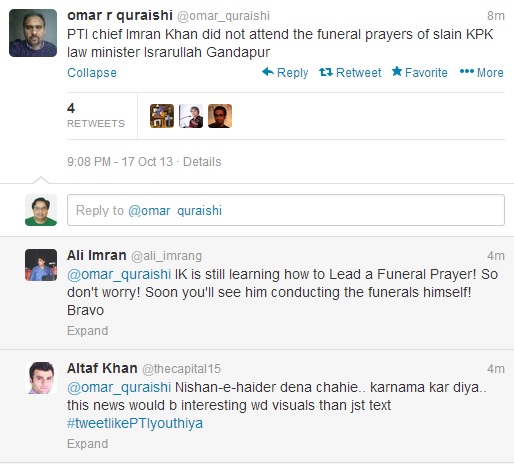