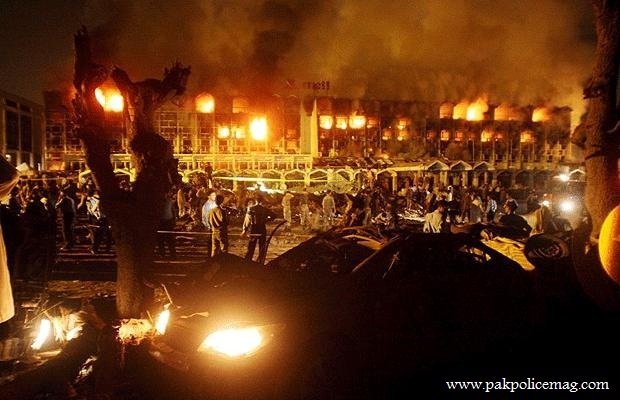 Language is one of the most powerful and creative human tools. The most basic function of language is to pass information, but language is also used to communicate emotions, feelings, desires, ideas, opinions, and beliefs. These later functions with the help of mass media have become very important in modern times. Mass media has become an effective tool in the hands of politicians and ideologues for exploiting and manipulating language to propagate their respective agendas and ideologies. Ideologies, in turn, organise specific group attitudes and these attitudes are used in the formation of personal and group opinions that are expressed in everyday discourse. Linguists and cognitive scientists agree that our discourse is not only shaped by the world we live in but also shapes the world for us.

The use of language for molding public opinion in the backdrop of a terror-ridden country can be best seen in the discourse of right wing politicians, a number of religious leaders (these have a soft corner towards the perpetrators of terrorist activities), and sympathisers of Taliban in mass media. This article attempts to shed some light on the use of discourse to confuse and mislead the populace by apologists and appeasers of terrorist activities that are openly and brazenly committed and claimed by Tehreek-e-Taliban Pakistan (TTP) and its affiliates throughout Pakistan and beyond.

There is a list of words that is used to refer to the Taliban. The list includes words like ‘our children’, ‘our people’, ‘stakeholders’, ‘hurt party’, ‘drone victims’, ‘reactionaries’, and ‘misguided youth’. These are the words that carry positive, neutral, and non-negative connotations, and hence represent these murderers of innocent citizens in an acceptable manner to the public. Many in the public take these words seriously and accept this representation as reality and in spite of being very angered and shocked at the frequent occurrences of terror attacks refuse to blame the Taliban.

Another category (collocations or groups of words) that is used to refer to perpetrators of the terrorist activities uses words that have no solid or tangible referents, and the actors referred to cannot be pinpointed. One of the favourites and top of the list in this category is ‘namaaloom afraad’ (unknown people). This is the term that is used to refer to any kind of killers from Himalayas in the north to Karachi in the south. Then there are words like ‘non-humans’, ‘secret hand’, ‘foreign element’, ‘saboteurs of peace efforts’, ‘people with no religion’, ‘conspirators’, and ‘foreign agents’. These are all words that are very abstract because so far not a single person has been arrested and shown to be a ‘foreign agent’ or a ‘person with no religion’.

Another tool in the hands of the defenders of Taliban is the usage of certain phrases and sentences that are used to refer to the acts of terror and the terrorists involved in these events. Perpetrators of terrorist activities are presented as devoid of any social or religious affiliations and hence become the part of an abstraction that leads to more confusion and ambiguity. Top of the list in this category is: ‘No Muslim can do such a thing’, and is followed by many like ‘The perpetrators of such crimes have no religion’, ‘The basic reason for terrorism is following the agenda of foreign forces’, ‘Taliban are not involved in terrorism’, ‘Taliban are just being maligned’, ‘The acts of terrorism are committed by foreigners backed by Mosad, RAW, and CIA’, ‘Acts of terror are a conspiracy by the foreign forces to destroy our national unity’, ‘There is a foreign hand involved in the acts of terror’, ‘Its an international conspiracy against Islam’, It’s a conspiracy against the citadel of Islam’, and last but not least, ‘It is a conspiracy to grab our atom bomb’. Once again all these utterances have no solid grounding in the realities of life in Pakistan. So far Pakistan has not officially claimed that any foreign hand or hands are involved in the acts of terror and suicide bombings in the country. If any foreigners are involved they are the ones who are members of al Qaeda and guests of Taliban in FATA.

As a result of this discourse of denial our public stands confused and divided on the issue of terrorism and this confusion and obfuscation can prove to be a big stumbling block in any government initiative regarding terrorism. If Pakistan has to win its war against terror it will have to wrest back the narrative and respond very effectively to this discourse of denial. The response will require clear thinking and framing of the narrative in very concrete and specific terms. A good start will be calling a spade a spade and telling the public truth and naming the criminals behind acts of terror. This is the only way that the government can have masses at its back when it decides to conduct a military operation against the Taliban.

The writer is a PhD candidate in Linguistics at Ball State University in Muncie, Indiana