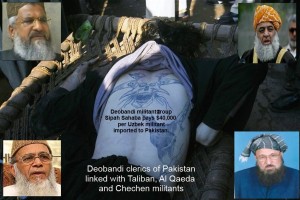 A prominent global think tank has termed the radical Sunni-Deobandi groups as the “primary source” of terror in Pakistan and said their continued patronage by the army has influenced Islamabad’s relations with India and Afghanistan.

The “expanding influence” of the Pakistani Taliban was “due to support from long-established Sunni extremist networks, based primarily in Punjab, which have served as the (Pakistan) army’s jihadi proxies in Afghanistan and India since the 1980s,” the International Crisis Group (ICG) said inits latest report.

“Their continued patronage by the military, and their ability to hijack major policy areas, including Pakistan’s relations with India, Afghanistan and the international community, impedes the civilian government’s ongoing efforts to consolidate control over governance and pursue peace with its neighbours,” the Brussels-based body said in the report titled ‘Pakistan -The Militant Jihadi Challenge’.

It warned that “the expanding influence of radical Sunni groups remained the primary source of terrorism in Pakistan” and maintained that their links with terror outfits like Al Qaeda made them “even more dangerous”. The ICG said the fresh attacks in the Pakistani provinces of Punjab, the Northwest Frontier Province, the Federally Administered Tribal Areas and Balochistan’s provincial capital Quetta “demonstrate the threat posed (by them) to the Pakistani citizen and state”.

Asserting that dismantling of the Sunni extremist groups “must become the core of the government’s counter-terrorism
policy”, it said these extremist outfits were “simultaneously fighting internal sectarian jihads, regional jihads in Afghanistan and India, and a global jihad against the West. Their links to international networks like al-Qaeda make them even more dangerous than before.”

The ICG said the aftermath of the Mumbai terror attack presented Pakistan with an opportunity to reshape its response
to terrorism, “which should rely not on the application of indiscriminate force, including military action and arbitrary
detentions, but on police investigations, arrests, fair trials and convictions. This must be civilian-led to be effective.”

“If the democratic transition falters, the military and the militants will be the sole winners. Genuine democratic governance, in FATA as well as the rest of the country is the best defence against the spread of extremism in Pakistan,” he added.