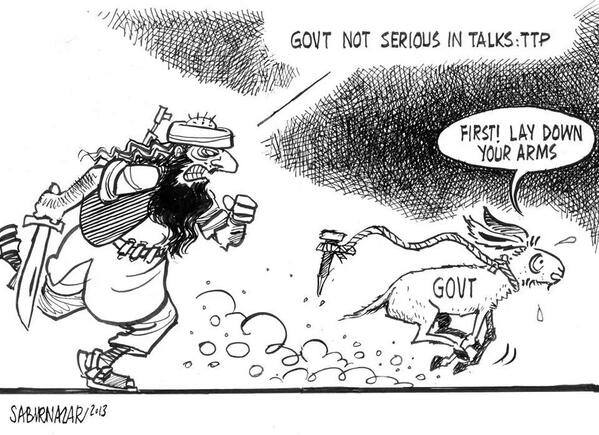 In the wake of the carnage at the church in Peshawar and the killings of Maj. Gen. Sanaullah, fellow officers and soldiers last week, Pakistan’s press and TV shows are once again crowded with discussions on whether the government should or should not go through with the planned negotiations with the Taliban and associated groups.

I think this debate is pointless. Negotiation is a process that takes place between two parties who are willing to talk to each other and configure a compromise that preserves the essentials of their respective interests and results in a situation that is acceptable to both.

It is pointless since we have not seen anybody who has come forward and said that they represents the other side, stated their position vis a vis these negotiations or their demands in unambiguous terms. We do not even know whether there is a single entity on the other side or a complex network, and if it is the latter, how much control the center exercises on the various component elements. It is unclear whether even the TTP, if we assume it to be the umbrella organization, actually does or does not want to negotiate. We hear mixed signals from some people who claim to be their spokesmen and a vague list of preconditions to negotiations, which may or may not be all that they want. So we seem to be trying to negotiate with phantoms.

From the pathetic statements of our political leadership, we seem to be eager and willing to listen to even these vague signals and make serious compromises. It appears that our politicians we are willing to offer the following. Pakistan will : dissociate itself from the US led war on terror, condemn drone attacks and go to the UN to try to get the UN to put a stop to them, offer an amnesty program and free Taliban prisoners, and perhaps even remove military forces from the tribal areas.
In return they expect the Taliban to restrict their activities to these areas and leave the rest of Pakistan alone.

Another important takeaway from these discussions is that the Pakistan Government is no longer capable of stopping the spread of the Taliban. They have become too strong and have wide ranging support from within huge sections of our population. Unlike Afghanistan where the Taliban influence is restricted to the Pashtun areas, the Taliban have significant support all over Pakistan. The main stream politicians and the religious parties have a soft corner for them and even a large section of the people of Pakistan do not consider them to be all that bad. We hear prominent analysts asserting un abashedly that the Taliban era in Afghanistan was a golden period; Opium production had reached unprecedented lows and other half-truths.

However, since all our debates and discussions and strategy formulation hitherto have been on the basis of assumptions, the only use I see of this game of charades is to carry it a step forward and ask ourselves whether: (a) the peace offerings that we seems to be willing to offer would be acceptable to the Taliban and (b) what would be the consequence for Pakistan.

From the Taliban’s point of view this could be a good starting point since it will give them time to consolidate their position in the tribal areas and develop their future strategy.

From our point of view it appears that we have to re- think our policy and develop a strategy, not to fight these monsters, they have already won- but to minimize the damage.

We may have to give up a part of our country to these elements in order to save the rest. Perhaps they would settle for North and South Waziristan for the time being. This agreement will of course not be permanent. They will want and take more. This is exactly what they had done in Afghanistan as they brought more and more areas under their control. However a temporary peace may give us time to shore up our
resistance in the remaining part.

The type of changes we will have to implement in the remaining part of Pakistan will depend on whether we want a religious state or a liberal secular state with an Islamic history and a Muslim population.

If it is the first, then we should prepare ourselves for a complete take over in the next round of fights. If it is the second, then we will have to fight hard to preserve this state- and here I do not mean the army only. Each one of us will have to stand up and be counted and make sacrifices.

This seems to me to be the logical conclusion of the position advocated by the negotiation lobby. However, if this is the real choice we are faced with, the earlier we realize it the better chance we have to save the rest of Pakistan.

So the Shakespearean saying “ to be or not to be” does have direct relevance to our situation.