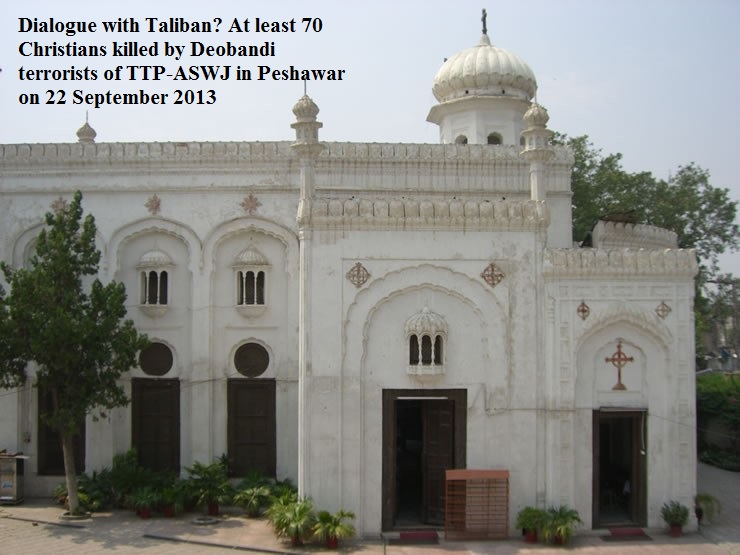 PESHAWAR (22 Sep 2013): At least 70 people, most of them Christians, were killed and more than 60 were injured in a suicide attack by Deobandi militants near Kohati Gate, Peshawar on Sunday. The Bomb Disposal Squad (BDS) has confirmed that were two suicide bombers. In the past, Deobandi militants belonging to Taliban and Lashkar-e-Jhangvi (currently operating as Ahle Sunnat Wal Jamaat Deobandi ASWJ) have attacked several churches in Islamabad, Peshawar, Karachi etc.

The latest incident of Deobandi attack on Christian community occurred outside St John’s church in Peshawar after the Sunday service came to an end. Sources said suicide bomber blew himself up outside Kohati gate near the Pakistan Church. Two blast were heard in the areas.

Sources said 65 injured inlcuding women and children have been shifted to Leady Reading Hospital. More causalities are feared in the blast. 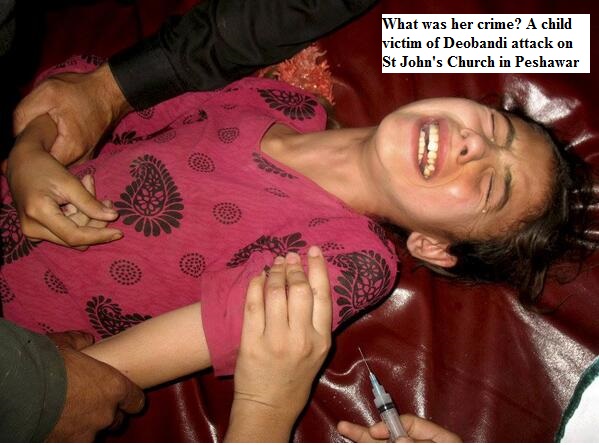 The eyewitnesses said the worshipers were leaving the Church when the blast occurred. More than 500 people were present in the Church at the time of suicide attack.

The deceased include six women and four children.

The hospital does not seem to have the resources to deal with an emergency of this magnitude and senior doctors and nurses on their day off have been called into work.

Nearby buildings were also damaged due to the intensity of the blast.

Proponents of dialogue with TTP-ASWJ terrorists

Pro-establishment journalists and bloggers in Pakistani media and blogs usually hide the Deobandi identity of Taliban, LeJ, ASWJ. It may be recalled that Taliban, TTP, ASWJ, LeJ etc are 100 per cent Deobandi militant groups and not a single Suni Barelvi, Shia, Ahmadi etc is a part of these militant groups. Pro-establishment writers usually misrepresent or obfuscate Deobandi terrorism in Pakistan by creating false Sunni-Shia binary. In the past pro-Taliban Deobandi clerics have been promoted by pro-establishment fake liberals in Pakistani media. For example, see this clip by a pro-Taliban cleric Tahir Ashrafi Deobandi in which he is openly threatening Pakistan’s Christian community’s Federal Minister Shahbaz Bhatti (who was later killed by Deobandi terrorists) and Ahmadis.

Tahir Ashrafi is routinely promoted by Raza Rumi, Najam Sethi and other pro-establsihment writers as a prophet of peace.

It may be recalled that only a few days ago, on 19 Sep 2013, a Christian was slaughtered in Karachi by a Deobandi fanatic over blasphmey charges. http://www.pakistantoday.com.pk/2013/09/20/news/national/christian-slaughtered-in-karachi-over-blasphemy-charges/