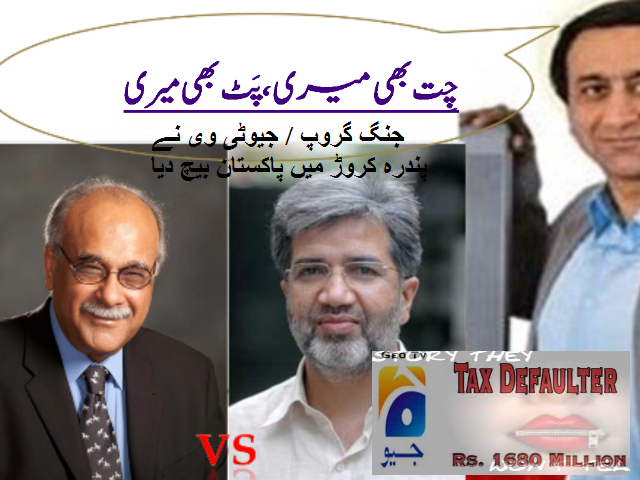 Bad news seems to be following Mir Shakil ur Rehman and his media empire of Jang Group after the most recent disclosure that the British Government has purchased television time on discounted rates from Geo Television to run British Government’s DfID funded education programme in Pakistan through the Mir Khalil ur Rehman Foundation. While the cheating and conflict of interest of Pakistan’s largest and most controversial media conglomerate, Jang Group, is well known, one needs to ask the British Government where their mind is when approving such projects where the conflict of interest is well proven.

In sets of questions asked by Lord Nazir Ahmed in November 2012, Baroness Northover made the astonishing answer that  DfID has spent just over £950,000 to date on a media campaign to raise awareness of Pakistan’s education emergency, through print radio and television and for this  The Mir Khalil ur Rahman Foundation’s services were utilized! This information is publically available on http://www.publications.parliament.uk/pa/ld201213/ldhansrd/text/121121w0002.htm 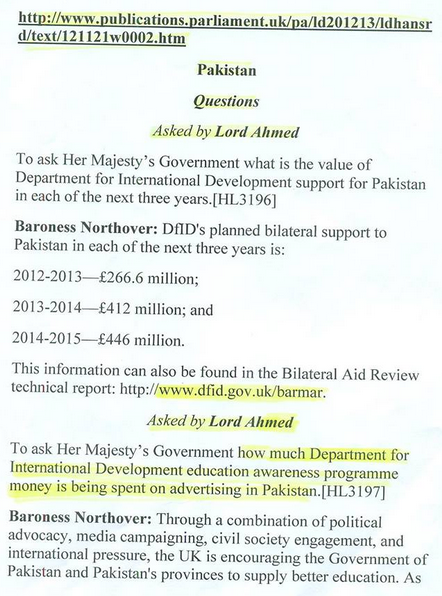 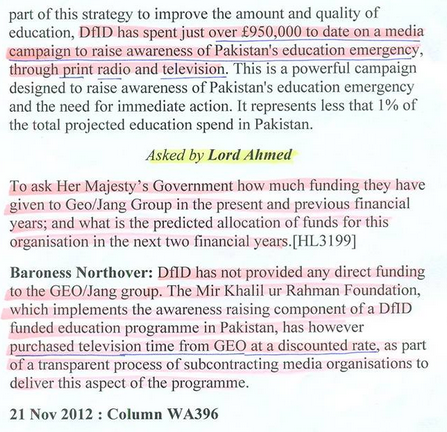 This is bad news for the holier than thou Jang Group which has continuously run anti-American and anti-Western propaganda but at the same time taken funds from Voice of America to show their programming. Biting the hand that feeds them is a policy that is well advocated by the head honcho, Mir Shakil ur Rehman. A relevant US Embassy Cable leaked by WIkileaks can be seen here: http://www.wikileaks.org/plusd/cables/08ISLAMABAD3712_a.html

Media Ethics and Transparency– these two virtues seem to be rather nonexistent when talking about GEO Network’s programming. Whether it is showing the faces of rape victims on national TV insensitively without protecting their identity and considering their right to privacy or blatantly disregarding PEMRA regulations by showing objectionable content that spills anti-nationalist venom amongst the viewers – GEO Network has left no stone unturned to make money by hook or crook.  When GEO Television Network faced another expose’ of their black deeds by the Media Commission Report and the leak of MKR Foundation’s plea for foreign funding earlier this year, the network strongly denied receiving any sort of foreign funding for the programming prepared and aired by them. The Document extracted shows us otherwise.

One must again highlight the bias of the Chief Justice of Supreme Court of Pakistan, the one eyed monster, Iftikhar Muhamad Chaudhry who reprimanded  the Pakistani Media Regulator, PEMRA to “behave in a responsible manner” after PEMRA raised allegations of GEO TV’s programming to be funded by foreign sources earlier this year. It is a well established fact that Ifitkhar Muhammad Chaudhry has been supporting the Jang Group throughout his tenure and Jang Group provides headline space to the man.

Though unconfirmed, but very strongly rumored that one of the senior judges, a Kashmiri Punjabi, is a cousin of Mir Shakil ur Rehman and provides the link with the Chief Justice. Though we may not like to name the judge, but readers would know that who gets the second highest headline space among supreme court judges! Is it a Khwaja or a Sheikh. We would not like to say!