Pakistan: Crisis and the Political Feats – by Irfan Tramboo 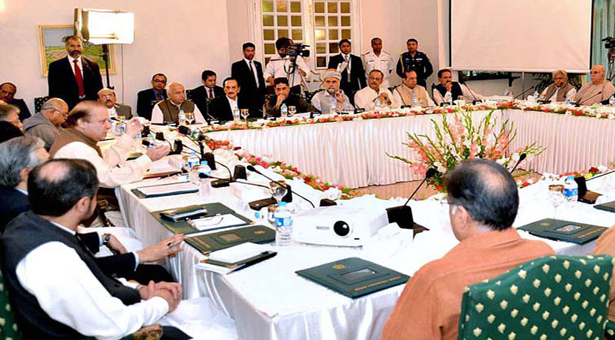 Important political changes on ground are taking place in Pakistan. For the first time in the history this year a democratically elected government completed its term in the office. General elections were held and new government led by Mian Muhammad Nawaz Sharif came into existence. Speculations were being made that Imran Khan’s PTI will get the chance to take Pakistan out of the state of crisis and destabilization. In this connection studies were conducted by various NGOs and which suggested that an overwhelming majority was in support of PTI. However what turned it against PTI at last is still a question which needs to be answered. People, who were ready to elect him as the PM, just gave him a small province of Khyber Pakhtunkhwa (KPK) to rule on. Well is this a practice session for him so that he can run a larger country in future or anything else? Well that will be decided in future.

Votes from the Punjab province were in the right pocket of PML (N) as this province decides the fate of any party during the general elections and PML (N) was fortunate enough to have it in their favor. This time people from Punjab province had out rightly rejected PPP and strengthened PML (N) which came in with the lofty promises made to the people.

However PTI got the chance in KPK and unfortunately deviated from the path initially by not appointing a young CM in KPK. Imran once said that “PTI believes in the power of youth. It is the youth that has to guide this nation” but when it came to the appointment of the head of the province, he appointed a man with some previous records of corruption, who just joined PTI by resigning from the party which according to PTI plunged Pakistan into the deep state of crisis. The party workers and senior leaders from PTI hence opposed this move of this appointment. Amid oppositions from party members Imran finally succeeded in convincing them all. How he convinced them? And how he appointed him as CM? Imran owes an explanation.

After the general elections another biggest development was the election of the new President. Mr. 10% (Aasif Ali Zardari) was about to finish his term. He might not have been in the mood of leaving the office but the things had changed, he had to leave. No matter that from last one year he never talked about Kashmir, but now as he was about to leave his office he said that “We will continue raise Kashmir issue on international forums” Mr. Zardari, you did nothing for Kashmir during your term now as you are leaving the office your statements carry no weight. You did your job of plunging Pakistan into the state of crisis, now please leave. During his term as the president, Kashmiris used to think that Pakistan has perhaps changed/ revisited its policy towards Kashmir and Kashmiris felt isolated with no support for them at all.

Two candidates were nominated as the ‘Presidential candidates’ One from PTI and another one from the ruling party PML (N).  Mr. Mamnoon Hussain of PML (N) emerged as a successful candidate and hence assumed the power of 12th President of Islamic Republic of Pakistan some days ago.

If analyzed, Mr. Zardar (Mr. 10%) had grabbed all the powers and the PM during his tenure was just for the name sake. The then government had to approach him regarding all the issues, even those issues which never fall into his ambit. He was acting like a ‘Kabab mein Haddi’ every time demanding his 10% share. Give my share or I will bang you.

However Mr. Mamnoon Hussain, renowned textile businessman from Punjab, now the 12th President of Pakistan, and a close aide of Nawaz Sharif will have to be in his boundaries and he has to work in coordination with him because if Nawaz Sharif felt like of being dictated he will immediately get him replaced with someone else loyal to him. Nawaz Sharif will want him to work in tandem with him and surely he will.

All the major changes and transitions took place. PM was elected. President has been elected, now comes the biggest task of stabilizing the internal instability of Pakistan and addressing the issues related to the national security.

Has there been any change in the internal stability of Pakistan so far? Unfortunately a big no, Karachi at this point of time is undergoing through the period of worst crisis. Extortion, targeted killing, ransom, kidnapping and loot, all these things are common in Karachi these days.  Federal government has called in the rangers because as of now Karachi police stands helpless and feeble. Targeted operations have been initiated, with Mutahida Qaumi Movement (MQM) accusing government of ‘Political Vendetta’. The entire situation in Karachi surely raises question marks on the credibility, accountability and the performance of Pakistan People’s Party (PPP) who is in power there in coalition with Awami National Party (ANP).

Now as the central government has intervened to tackle the crisis, Altaf Hussain (Altaf Bhai) of MQM has termed this action as the political vendetta focused on MQM. On one hand MQM accuses government of being callous regarding the grim and macabre situation in Karachi and designates itself as the well wishers of the people of Karachi and on the other hand it is beating its chest, terming this action as the ‘Political Vendetta’. This dual mindedness surely visualizes the atypical behavior of MQM which one has to understand; especially the people of Karachi have to.

The business nerve center of Pakistan Karachi has seen the turbulence and commotion since 1961 but then it started to get to the normal. However now, the situation is deteriorating with every passing day. Many business establishments are being and have been relocated to the other cities of Pakistan. Investors are reluctant and indisposed to invest in the city of Karachi. This state of crisis is affecting Karachi not only politically but economically as well.

When one tries to understand the real cause of the crisis in Karachi, the hand of local political party whose heads is somewhere in UK, cannot be ruled out. They have been accused of ‘Mafia Giri’ in the past having their own areas of influence. No another party being allowed to furnish there. At this point of time you can find ‘No Go Areas’ in Karachi city, where political representatives from other parties are not allowed to enter.  These ‘Mafia’s’ have created a state within a state, so their hand in destabilizing Pakistan through Karachi cannot be ruled out at all. Another big hand that is of ‘India’ cannot be ruled out either. India’s  ‘Karistaani’ has been traced down in Baluchistan separatist movement which was aimed again to destabilize Pakistan and also to create a loop hole in its strategically important location, so that the western forces including NATO etc can bypass easily. So India keeping the same motive into its mind can be involved in creating mess in Karachi, hence destabilizing Pakistan through the business hub of Karachi.

The rulers of Pakistan will have to come up with the effective measures to tackle the situation in Karachi and to trace down all the elements which are disrupting the peace and tranquility in Pakistan. Also they should come up with the measures to tackle the issues which are posing great threats to the national security of Pakistan. Everyone who is in power, keeping aside all the differences should join hands in stabilizing Pakistan. It has suffered a lot now it is time to prosper. We Kashmiris are also of the opinion that the stable and prosperous Pakistan is in the favor of Kashmir.

26 responses to “Pakistan: Crisis and the Political Feats – by Irfan Tramboo”