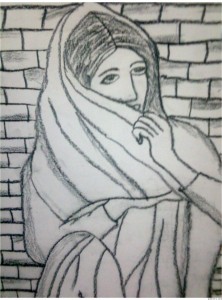 Another common misconception and line of argument is to claim that these kahwateen digests and dramas are exaggerated versions of reality, whereas in real women do not enjoy being slapped around (with romantic underpinnings) by men who ‘love’ them or by men who are not after all bad at heart and are actually very affectionate deep inside, provided that she make perfectly crisp and round parathas that he loves.

Many a times, maybe in routine, I have seen a woman being pitched against and compared with other women, who are perfect outcomes of their South Asian upbringing, not by males but by their female counterparts.  It wouldn’t be an exaggeration to assume that misogyny in Pakistan largely stems from women who are badly suffering from Naik Parveen syndrome. These naik parveens come in different shades and nature and are seen reinsuring, validating and even romanticizing gender bias.

There are several categories of them:

The slut shammer: There is always a bunch of them lurking somewhere around your immediate surroundings regardless of your location on planet earth. You can give a slut shammer several reasons for proclaiming you a characterles bayhooda lerki. You were ‘caught’ on a date, you were talking – No, shamelessly laughing – about something with a male colleague of yours. You are often seen wearing Jeans in college/University. You have male friends. You talk about boys. She caught you looking at a guy. She heard you were crushing on a guy and last but not the least, the most horrible things of all. You happen to have a boyfriend, and your facebook relationship status is set to ‘in-a-relationship’ (astaghfirullah!!). In short if you do or say or see something that has anything to do with na-mehrem males: you my friend are a slut!

ba-perdah baji/aunty:  She has a knack for estimating the length and of your sleeves dupatta and kameeze from miles away. She is the one who had a brief summer course in Al-Huda several years back and somehow couldn’t really get over it and ended up getting over the top about it instead.  She is in a perpetual state of being on higher moral grounds merely on the account of her bling-bling burqah. Her camel hump type scarf studded with diamonties is way better your duppatta. Along with running pret lilen-cotrai mix burqah fashion line,  she is now on a mission to make the world a more ba-perdah place for men, by calling out on random strange women passing by and telling them how their nangay (naked) heads will go bald in  2015 if they continues roaming around in public wearing lewd dresses like these. In case your head is already covered up she would still make it a point let you know that your shirt is too tight and your pajamas are too short (i can see your naked ankles too). Whatever you are wearing, it still makes you look like a slut anyway because your dupatta is see-through as well.

The Rishta obsessed naik parveen:  Veena malik, Sara loren and Matihra are characterless bitches for dancing in front of strangers while naik parveens only dance in front of prospective hubbies and rishta aunties on mehndi functions?? There is this one typical case next door or on next bench who might be having a pretty hard time trying to choose between birmingham wala rishta and dubai wala rishta.   Every important decision of her life is gauged by a rishta barrometer. I need to get find myself two year degree program because it’s going to be a jhat-mangi-patt-biyah-scene and ‘lerka’ cant wait, he is already 35. I need to learn how to cook chicken jalferizi beacuse my nand ki saas ki choti behen really likes it. Prospects of having to leave her parents might give her dukhi heart aches, and although she doesn’t  want to leave her baba jani’s home ever, but nevertheless her  favorite  drama serials are; piya ka ghar piyara, meenu ka susraal, mera naseeb, meri ladli, meri behen meri devrani and aik aur desperate aurat. To add cherry on the top she watches all the morning shaadi shows in order to make a list of armaans she is supposed to have for her big day.  These dramas never fail to make her cry judai-kay-aanso.

The perfect Bahu: She is highly qualified or atleast qualified enough to catch a rishta boy. MBBS doctors are ever green prefect baho maha-ranis. She  went through tortuous academy lessons, staying up late, doing assignments, securing good grades, praying five times a day. All that just to makes sure she gets married right after getting her degree. Eventually she would gleefully let her in laws judge her capabilities by the crispness of her perfectly round parathas and colorful biryanis. She will get pregnant within 24 hours of getting married and will take over kitchen duties within next 24 hours (remember the kheer mix advertisement?). Her ability of becoming a perfect housewife is directly proportional to her ability of being a doormat. It will take about 2.5 nano seconds for her to change her sur name on Facebook. About as much time as she took to fall in love with her hubby as soon as the rishta-pakka signal went green. In case she keeps her job( with her saas’s premission ofcourse), she will make sure that her professional life does not tar her married life. Her perfect idea of a happily ever after is cooking daal chawal right after comming back form office while her hubby decides to freshen up a little bit (tarka lagnay tak). She does not like her mother-in-law and might think of her as a disgusting vile aurat but she refers to her as ammi jan nevertheless. And obviously her hubby  becomes ‘voh’, ‘app’ and ‘un’ out of utter respect.

These above mentioned categories could come off as generalized or politically incorrect account of what constitutes a desi women in general. But being a woman, who has spent good enough time watching and listening to girls talk and write about their fantasies both in real world and through media, allow me to say that misogyny and chauvinism in Pakistan begins from right where it hits, that is: a typical female of this society.

Writer of this article is a not-so-naik-parveen and a liberal shirll Feminazi,  hopefully black listed in the rishta market by now.