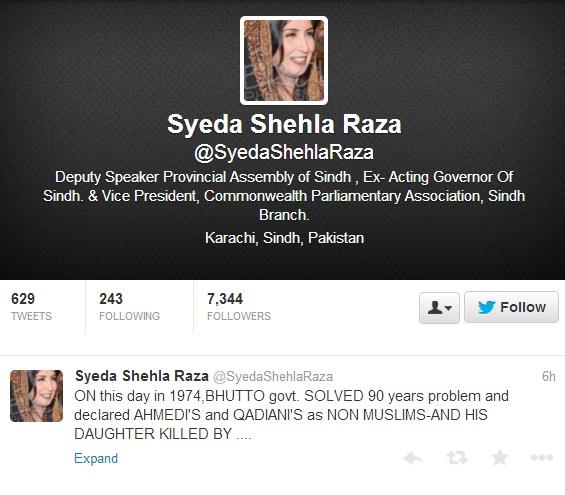 LUBP firmly condemns the anti pluralistic position by Syeda Shahla Raza. While the tragic event of apposition of Ahamadiya Muslims did take place during the government of Zulfiqar Ali Bhutto, it is certainly inhuman and against inclusive spirit of the Pakistan Peoples Party. It maybe argued that the then Prime Minister Bhutto was cornered into this discriminatory situation. The discriminatory legislation and its support is completely condemnable no if ands or buts about it.

Pluralistic parties like the people’s party should be working to reverse this horrible decision not praising this travesty.This type of legislation is the only time in parliamentary history of the world that legislation has been enacted to determine the faith of a particular group, this is not the job of parliament. It should be left to a higher authority.

First they came for the communists,
and I didn’t speak out because I wasn’t a communist.

Then they came for the socialists,
and I didn’t speak out because I wasn’t a socialist.

Then they came for me,
and there was no one left to speak for me.

Martin Niemöller (1892–1984) about the sloth of German intellectuals following the Nazis’ rise to power and the subsequent purging of their chosen targets.