Shehla Raza speaks from the heart. The crimes against Shia and Sufi Sunni (brelvi) which form about 80 percent of Pakistan’s population have been steadily increasing since 1985. Shia Muslims are especially targeted, Shia doctors even Shia prisoners are beheaded in Jail breaks. A minority powered by the ideology of the British Saudi Arabia is out murder or convert the majority of Shia and Sufi Sunni (brelvi) to only follow their version of Islam. If we put a Bander (monkey) in charge of Kaaba  should we follow that Bandar?

Following the dictates of Hegelian dialectic, the Globalists have created two antagonizing forces, the “Liberal-Democratic” West, against Terrorism, or “political Islam”, to force us into the acceptance of their final alternative, a New World Order.

The West and Islam have had a long era of compatibility, but this history has been denied to foster the myth of a “Clash of Civilizations”. In order to inflame the sentiments of the West against Islam, our attention has been focused on the specter of fanatical Wahhabism, and more specifically, its most notorious exponent, Osama bin Laden.

However, as outlined in an excellent article by Peter Goodgame, The Globalists and the Islamists, the Globalists have had a hand in shaping and financing all the terrorist organizations of the twentieth century, including the Muslim Brotherhood of Egypt, Hamas of Palestine and the Afghan Mujahideen. But the history of their duplicity dates farther back still, to the 18th Century, when British Freemasons created the Wahhabi sect of Saudi Arabia itself, to further their imperialistic objectives.

That a British spy by the name of Hempher was responsible for shaping of the extreme tenets of Wahhabism was mentioned in a Turkish work, Mir’at al-Haramain, by Ayyub Sabri Pasha between 1933-1938.

This pattern violence in Pakistan clearly signals the decline into an abyss.  The globalist have been fueling the ugly face of Islam (Saudi) to justify global domination. So when a non muslim hears the Azan of Muslims or “Allah Hu Akbar” the first thing to come to mind is a beheading.

There is no return from it unless Pakistan embraces what it was originally created for. A pluralistic place which would be a sanctuary for the minorities of India. This was the main reason the the Christians in Punjab Assembly cast the deciding vote in favor of the creation of the State of Pakistan. Why would they do that if they knew it would be destined to be the intolerant Islamic state with no clue what type of Islam it should follow or what it means.

There is still time to revert to a pluralistic State, a democratic Republic or Pakistan or a Peoples Republic of Pakistan. Let people have the sovereignty not God, because God is hijacked by those (Wahhabis) that behead others and eat the organs of their victims. Failure to do so will only mean more blood shed and further dismemberment of  Pakistan into very small states and enslavement to a new world order. 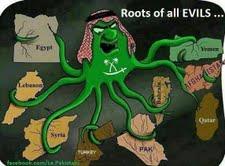