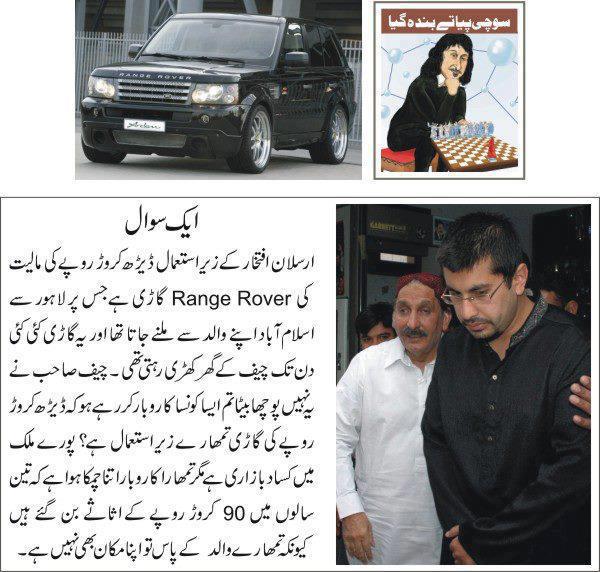 Slowly but surely, Pakistan’s intelligensia is waking up to confront the Judicial dictatorship of PCO Chief Justice Iftikhar Muhammad Chaudhary. What was once a trickle is slowly gathering pace as more scholars, legal experts and lawyer’s are taking a bolder stance against the judicial dictatorship of PCO Chaudhary.  LUMS professor Osama Siddique has been quite articulate about the myriad issues that urgently need to be addressed by the Judiciary. He has written and spoken about these issues in the past as well and on one instance, Taliban apologist anchor Hamid Mir unsuccessfully tried to detract him.  Hamid Mir’s prejudice and bluster failed in that instance as well.

In the last couple of years, scholars and lawyers like him, Asad Jamal, Maryam Khan, Aqil Shah, Tausif Kamal and last, but not least, Saroop Ijaz have addressed the need for judicial reforms as well as highlighting judicial overreach and a creeping judicial bias (in favour of the Jihadis, PML N and ISI).

Lately, a former Chief Justice Jaanisar, Babar Sattar too has taken a dissenting position.  While we disagreed with his previous one-sided rants against the former PPP government to justify the judicial bias of PCO Chaudhary, we will stand by him if he is censured for his current anti-Taliban stance.

We are cross posting Osama’s article and commend him for standing up for dissent.  As a society, we must stand up for dissenting voices at all costs. In Pakistan, the current Judiciary has developed a megalomaniac complex with the deluded notion that they have the right to override both the Executive and Legislature – especially if it is a PPP government in power. This current judiciary of 22-Grade bureaucrats have ridden rough shod over the country’s Constitution and allowed it to be mangled by military dictators as long as it suited their judicial dictatorship agenda.  Article 63 (inserted by General Zia ul Haq) and Contempt of Court Ordinance (inserted by General Pervaiz Musharaf) are this PCO Judiciary’s favorite toys.

Using dictator-inserted clauses, this PCO judiciary has been embolden to release the most dangerous terrorists while wasting the tax payer’s time and money to hound the elected officials and ministers of PPP. This judiciary loves to stifle dissent while protecting the massive corruption and nepotism of PCO Chief Justice and his son, Arsalan Iftikhar. In the last 4 years, this PCO judiciary has made a mockery of justice relying more on the newsfeeds of GEO than the Law to pass judgement.  The Media-Judiciary nexus has given host to a whole era of corruption in Pakistan. With a pathetic legacy of legitimizing military coups, sending one elected prime-minister to the gallows and another dismissed – all in highly questionable trials –  this judiciary deserves all the dissent that society can muster. And more.

More power to the power of Dissent!

“We are the hollow men

We are the stuffed men

I have always found TS Eliot to have a decidedly South Asian tone and resonance. After all, great poets speak to all times and their discontents and not just their own. Decidedly, our national pastime is to prop up and support hollow and stuffed men as the national interlocutors and intellects. We elevate dentists, failed doctors and amateur theatre producers to the pedestal of political sages. We look to gem collectors, star gazers, palmists, fortune tellers, tarot card readers and purveyors of intelligent parrots to predict our election outcomes. We are routinely confronted with odious charlatans and their non-existent or downloadable ‘buy-one-get-one-free’ doctorates — TV anchors, state ministers, prominent lawyers and sham academics — and we choose to look the other way, thereby condoning them. Our national icons go around preaching obscurantism with a chequered dastarkhwan wrapped around their head, or a sedated snake around their neck as they hum pious platitudes while riding a motorbike, and/or several prejudices and grudges intertwining their psyche. Our so-called opinion-makers support red berets and pent up, unrequited hate; they froth, fume and break into unmelodious song with a rapidity that ought to mandate a trip to the head doctor; and they offer a threat a minute to all creatures great and small — lurking somewhere in a large white metallic container. We equate institutional development with laying out marble floors, choosing toilet tiles and assembling pliant mediocrity. We evade putting tough questions to the disingenuous as they are known to our uncle’s business partner’s son-in-law. The soulless lecture on the soul, the immoral preach morality and the ignorant disseminate knowledge. Abhaand is always preferred to the scholar and the crooner always trumps the thinker. Tha jo nakhoob bil akhir wuhi khoob huwa (that which was unmeritorious ultimately became meritorious).

And, above all, we sit on the fence for so long — while any crucial point of merit or principle is at stake — that our hindquarters are perpetually rosy with the strain of our self-imposed inertia. And yet, such hollow and stuffed men as we are, we quixotically expect that those amongst us who are either born ‘great’ (read: hollow and stuffed) or have greatness thrust upon them — for hardly anyone deems it worthwhile anymore to actually achieve greatness — ought to serve as our messiahs. Muslihat or expedience is our mantra. If Mirza Ghalib’s cosmic vision was somewhat troubled by the sundry shah ka musahib in besieged Delhi, the sight of ubiquitous toadies and lackeys in contemporary Pakistan would have blinded his gaze.

Being who we are, it, therefore, comes to us as a shock when someone finds it necessary to openly speak his or her mind. Indignation over such impudence reverberates through the length and breadth of our tottering and facile hierarchy of power and authority. Even otherwise, to curb, shout down, muzzle, restrain, intimidate, hold in contempt, prosecute and penalise are reactions of great historical provenance in our neck of the woods. After all, in many ways, we remain Lord Macaulay’s children. Ask a Bhagat Singh, a Lajpat Rai, or aManto. Not too many post-independence examples that I can think of. Perhaps, because a people who remain subjugated in their minds are never truly free. Ultimately, we are not the magic stuff that considered and valiant dissent is made of or honest critique stems from or a pluralistic disagreement can thrive in. Rather, we are the inglorious goo that long, safe and subservient careers of meek assent can be carved out of.

A healthy and evolving society strikes a balance between respect and restraint (and these are always earned and not demanded and, therefore, willingly extended where truly due) and uninhibited, unprejudiced and bold critical speech. We, of all people, ought to know by now how grievous it is for a society to curb speech and also ultimately how impossible. This challenge becomes particularly significant in a milieu where the sanctity and prestige of a vital and elevated national institution is to be preserved while allowing for unencumbered and meaningful politico-legal discourses. The judiciary is a prime example. Elsewhere, it has long discovered that constant self-regulation and self-discipline in the exercise of its potentially very vast powers works wonders towards consistently courting public esteem. As does an astute evasion of matters that ought to be exclusively debated and decided in parliamentary and societal contestations. There are various other time-tested norms. Such as: an avoidance like a plague of sensationalist and muckraking elements of the press; a staunch adherence to writing sparse, consistent and well-reasoned judgments that decide not just the case at hand but help develop the law in response to legitimate societal needs; successful resistance to the charms of historical parables, poetic inclinations, ethical allegories, castigatory diatribes, self-righteous observations and moralistic condemnation in favour of rigorous, staid and sensible jurisprudence; and abstinence at all costs from obiter dicta, the populist public statement and the gratuitous camera shot.

Judges have found that their goal is to discover the optimal balance between regular judicial minimalism and the occasional judicial activism — only when sorely needed, practicable, within a consistent framework, and highly likely to make a positive impact. They also recognise that the judicial career mandates a rather lonely, discreet, circumspect and low-profile existence. They also acknowledge that particularly, since their responsibility is so high, their numbers so few, their independence so vital and their direct accountability such a difficult and rare phenomenon, it is overwhelmingly up to them to ensure that they give little cause for concern to those who look up to them. They are also wary of the consequences of failure. Judicial despotism is one extreme manifestation and much discussed in contemporary constitutional jurisprudence. And while direct judicial accountability through impeachment or removal of judges is avoided at all costs, it does at times come into play due to acute necessity.

Instead, indirect accountability through high quality criticism helps restore balance. In modern constitutional democracies, there is a consensus that, as with all other powerful institutions, it helps the courts stay the course. The main arena and source of solid critical appraisal and necessary criticism of judicial pronouncements is the legal academy. It attracts, sustains and puts a premium on some of the sharpest intellects on offer. Unfortunately, we never had a legal academy, don’t have one and will likely never see one
— for our best legal minds find it too low brow even while they lament its absence. It is socially frowned upon, unsexy, marginalised and can’t finance a snazzy car. At the same time, what currently passes for a legal academy is increasingly controlled by corporate interests and either milked for revenues or bandied around for social leverage and summer club kudos. So don’t hold your breath on that score. And that then leaves the occasional lawyer, politician, journalist, civil society wallah and public intellectual who still takes a huge risk and engages in a fact and reason based critique of where he/she thinks the judiciary’s priorities are not right or its approach less than equitable. Not only is this their unassailable right but their continued ability to do so is vital if a sustainable and reasoned critical discourse is to emerge in our pathetically thoughtless milieu. Collectively they put up the sole looking glass for our jurists to look into. Already a minor and struggling species, it is vital that they neither be condemned nor curbed.

Despotism is an unpredictable and resilient beast. We, of all people, ought to know as, over the years, we have seen its several avatars. Those familiar with Dastaan-e-Ameer Hamza may recall the false god Khudawand Minaar Nasheen who lived up an illusionary tower and held forth from his lofty perch. But then Hamza came along to expose his fabrications. Throughout our history, we have had various claimants to unassailable truth — truth of a variety that you either embrace or else face consequences of. At the same time, we have hardly ever had any Hamzas to put forward a different point of view or a reasoned dissent. For the sake of the health and future of our democracy, let no one dissuade those amongst our youth, who may have the precious courage to speak up — courage which their worldly elders invariably lacked.