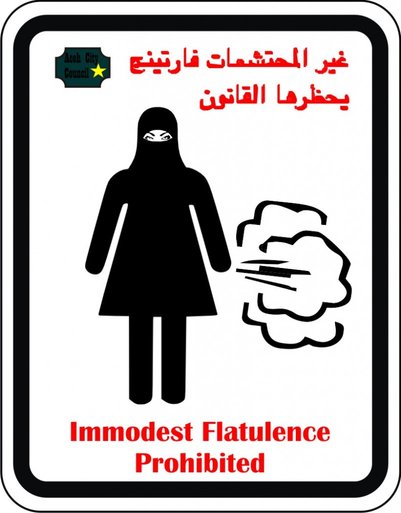 As I, walloped by depressing thoughts, struggle to make sense of an Eid Day in a silly and sad season, a friend sends me the following to put a smile on my face. Well he actually does as I realise that the fathers of grown up girls have one more thing to worry about if ever their girl goes to Indonesia. She must be informed to not go to a certain town in Indonesia in order to avoid the risk that the interplay of gases with her bowels can entail. That is a place where women can be judged too harshly for releasing some pressure.

Having grown up in a small town where we as little kids found big farts so very amusing, I can’t bear the idea of them being stopped by law. Of course, while growing up somebody makes it clear to all of us that they aren’t things you want to show off about and you have to let them go as silently as possible. However, now we have a place where, whether by accident or design, sweet ladies and girls aren’t supposed to indulge in the steaming achievements cruising out of their bums, propelled by the wonders of air pressure into the marvels of the universe. That an action as involuntary and simple as this can turn a woman into a walking turd.

I am also bemused how the women in the city in question will absorb the local law and learn to retain those gases and turn them into something else – whistles, for instance. Intriguingly, the article is silent about men. Which probably means that little boys remain free to boast about the force of whiz their bowels can engender.

Now, as you may know, the above news about Indonesia was actually a piece of humour. Yes, indeed. I only saw it today and thought it was true. Then I surfed the web and found repeatedly the same source for the news. Then I realized it’s a satire or a joke. Just as anti-women religious or man-made laws are nothing but a bunch of cheap jokes. Women’s burqa is a joke. Women’s marriage with the Quran is a joke. Women’s murder for honour is a joke. The onus on women for producing witness for rape is a joke. Disallowing DNA evidence is a joke. Banning female passengers to straddle motorbikes behind male drivers is a joke. Banning women from wearing trousers, whipping women for wearing trousers, banning women from driving, asking female workers to “breastfeed” their male co-workers in order to work together, tracking women’s cross-border movements etc. —all are dirty jokes! These jokes are now realities for women. So when a real joke pop-ups, not everyone can realize it is a joke. I took it seriously but decided to search and realized it must be a joke. I don’t fault the people who take it seriously because religion is so preoccupied with female anatomy and what they do with every part.