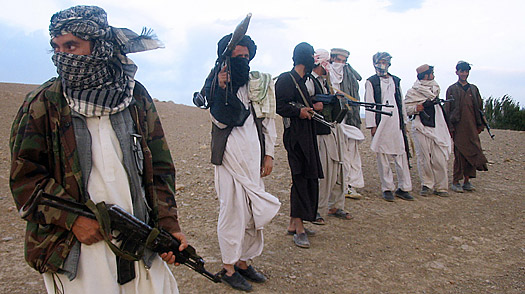 A palpable buzz in the town is that after the withdrawal of NATO forces from Afghanistan by the end of 2014, the hard-bitten Talibani guerillas may trickle over to the Indian-occupied-Kashmir. Local media has been sent into a tizzy as seasoned political pundits discuss its possible repercussions. While most of the blustering Kashmir experts on prime time shows play it down as gibberish talk, some are not ruling out the possibility of Kashmir being Pakistani Taliban’s next pit stop. Amidst all this shrill noise from different sides, a poor common man on the street looks panicky and frightened, not knowing who to believe.

The threat, according to naysayers, comes from Tehreek e Taliban Pakistan (TTP), which is an umbrella organization of militant groups in the federal areas of Pakistan along the Afghan border, formed in 2007 under the patronage of Baitullah Mehsud. While their stated intent is to fight the pro-US governments in Pakistan and to enforce a system of Sharia (in which minorities have no place), they have also been aggressive in their war against the NATO forces in Afghanistan.

In December last year, after Hurriyat Conference (M)’s much-publicized Pakistan visit, Chairman of his faction of Hurriyat Conference, Mirwaiz Umar Farooq warned New Delhi of “Taliban spill-over with impact beyond Kashmir” if the dispute was not resolved before US withdrawal from Afghanistan in 2014. He came under blistering criticism for his ‘surreptitious’ remarks bordering on paranoia, but was he only stating the truth based on his observations or was it a blatant invite to the Taliban?

Recently, a 42-minute video was released by Pakistani Taliban, in which their chief Hakimullah Mehsud and his deputy Wali ur Rehman addressed media persons and answered queries on the strategies and methods of Taliban warfare, its relations with Afghan Taliban, and plans of extending their operations to Indian-occupied-Kashmir. “The practical struggle for a Shariah system that we are carrying out in Pakistan, the same way we will continue it in Kashmir. And this is the only solution for people’s problems,” said the beaming duo, vowing to liberate Kashmir and establish Islamic Shariah.

On one hand, the possibilities of Taliban coming to Kashmir look slim, because they are also engaged in a fight against the government in Pakistan and NATO’s withdrawal from Afghanistan in 2014 is not likely to end their ‘turfwar’ within Pakistan. Political analysts believe the change of guard in Pakistan is not going to discourage them or dampen their spirits. Even though the newly crowned PM is known for mollycoddling Taliban and their shady fringe groups, now he also has to entertain Obama and go with a begging bowl to bail out his country from economic crisis. That, in all likelihood, will keep the Taliban fighters busy in Pakistan and they would find it difficult to sneak through Line of Control without the aid of army.

On the other hand, there is a small section that is loudly and vociferously sounding the alarm bells. They are not ruling out the possibility of Taliban ‘liberating’ Kashmir, post NATO withdrawal from Afghanistan in 2014. Talibani fighters may be inclined to extend their operations beyond the Pakistani border and as stated in the video released by TTP, the liberation of Kashmir from Indian occupation may be one of their prime objectives. After all, they won’t come for skiing and paragliding, they mean business.

The question, however, to be asked is: should TTP be welcome in Kashmir? Who will host them in Kashmir if they come? Will it help the cause or damage it further? Or, to put it plainlyis there a need for TTP to come to Kashmir in the first place? Unlike Afghan Taliban, TTP is only known for its notoriety. Former was the creation of America to fight Russians in Afghanistan, while latter came into force essentially to wipe out the pro-west institutions in Pakistan and to enforce most strict form of ‘Shariat’. Has it been successful in doing just that?

Pakistan continues to be an important ally of America in its ‘war-on-terror’. They can still come in with permission and launch drone strikes. They still have their embassy and other offices across Pakistan. The relations between Pakistan and America have only got better, at least at the governmental level. With Nawaz Sharif’s PML (N) in power, things are not going to change much. Then what has TTP been fighting for all these years? What has it achieved? Yes, there are some achievements to their credit.

Over the years, TTP has only managed to wreak havoc in Quad e Azam’s Pakistan. They have declared ‘others’ as ‘apostates’ and take it upon themselves to wipe them off. The dream of an Islamic republic where all Muslims live in peace and dignity stands in tatters today, and much of the credit goes to TTP and the monsters it has created in the form of Sipah e Sahaba Pakistan (SSP) and Lashkar e Jhangvi (LeJ). If you do not subscribe to a particular line of religious thought, you are only inviting trouble for yourself. Chances are you can be shot dead on a crowded street, killed in a targeted attack, blown up in a mine blast, offloaded from a bus and shot dead and other far more diabolical ways. That is their achievement, their way of enforcing Shariah, establishing a Khilafah, in which minorities like Shias or Ahmedis or Christains have no place.

Now, since they have expressed their desire and keenness to come to Kashmir, I cannot help but fear for the worst. Our freedom movement has stood the tests of time primarily because we, cutting across sects and communities, have stood together. I don’t want to see them spilling the blood of my brothers and sisters to ‘liberate’ Kashmir and to ‘enforce’ their brand of Shariat. We know how to resist and we know how to fight, and we can do that without any unsolicited help of Taliban or their proxies. There is no dearth of leadership, but truth be told, the movement presently is led by people themselves, and this shift has been more visible after the 2010 popular uprising. Keeping TTP out of the picture is important.

While India is not particularly happy with the Taliban upsurge in Afghanistan, it has no such issues with TTP. The internal war in Pakistan is in the interest of India. No matter the honeyed rhetoric of peace emissaries, the truth is India wants to see Pakistan crumble, and vice versa. Even if TTP comes to Kashmir, India should not fret much so long as TTP carries out its sinister sectarian agenda, which will only benefit India and weaken the freedom movement in Kashmir. It is one of the reasons why India has pledged the assistance of staggering 2 billion dollars to Karzai led government in Afghanistan, while carrying out the proxy wars in insurgency-hit provinces of Pakistan, in collision with TTP.