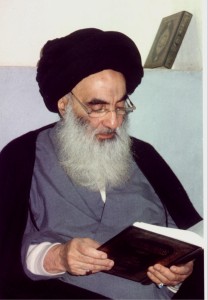 Editor’s note: We are cross posting this blog so that the Sunni Ulema of Pakistan such as Deoband might issue similar Fatwas about the Shia Muslims facing Genocide at the hands of Deobandi terrorists. Ayatollah Sistani could simply have looked the other way, yet he chose to guide the Shia Muslim Majority in Iraq in a responsible and humane manner. History will record the humanity of the Deobandi Ulema and hold them accountable for the Shia Genocide in Pakistan. For if they don’t speak Deobandism will be become synonymous with ‘zulm’, just like Barbarism has become synonymous with ‘zulm’ due to the atrocities of the Burberry pirates. History is not kind to those that look the other way at a time defenseless are killed. The conspicuous silence of Deobandi Ulema on the Takfeer and hate mongering by Deobandi groups, which is driving Shia Genocide in Pakistan, is a crime.

In 2007, Grand Ayatollah Ali Sistani, Iraqi Shiite marja issued a landmark message on Shiite-Sunni unity. Recently, with the outbreak of unrest in Iraq, he has reissued the message.

“There is no real difference between Shiite and Sunni beliefs, and I am the servant of all Iraqis [either Sunni or Shiite],” he emphasizes. “I love everyone, and this religion [Islam] is the religion of love,” he adds. He expresses his surprise that how the enemy could have succeeded to divide Islamic sects.

Sistani’s message, also sent to first Conference of Sunni and Shiite Scholars, asserts that “ this kind of conferences are highly important, since they help Shiites and Sunnis find out that there is no real difference between their beliefs, and the difference simply is on legal (Fiqh) issues.”

“Shiites should defend Sunnis’ social and political rights before defending their own rights, and we call [everyone] for unity,” Ayatollah Sinstani adds. “As I have said before, Shiites should not call Sunnis their brethren, but their ‘souls.’

“We should attend Sunnis’ Friday prayers more than Shiite’s. We do not discriminate between Arabs and Kurds, and Islam has collected all of us [under common umbrella],” he asserts.

Sistani also points to Sunni legal issues and says that “we [Muslims] are united in Kaaba (Holy Shrine), prayer, and fasting.”

“During Saddam’s era, I saw many Sunnis’ conversion to Shea’ism. When asked why they converted, they answered that they converted to Shea’ism in order to attain Ahlul-Bayt friendship,” Sistani accounts, and “I was telling them that Sunni Imams (four Sunni Scholars) had defended Ahlul-Bayt.