This is dedicated to something that we never usually pay attention to. Our protectors, the rangers. Unfortunately, 1 out of every 2 people living in the metropolitan (probably more than that) have this perception that the ‘police is corrupt’, ‘the police is involved in all the dacoities’, ‘the police is politicized’. This is both true and not true. How? Simple. If you have a relative who has lived the typical, average Pakistani life in Karachi, Interior Sindh (especially Sukkur and Khairpur) you will not need a detailed introduction on what the ‘Pakistan Rangers’ is all about. This should have been written back long ago, but, the intellectuals want reference and logic where as the leftovers won’t care until it is explained with chained links.

It is only now we know that a Rangers scandal came out, regarding Colonel Aftab. If you’ve not seen it, here it is :

Where as you might not have known about this poor guy as well, who was NOT shot because he did not stop, but was shot after he and the Rangers had a hard talk and the Ranger couldn’t suffer the strike on his ego :

The Case of Murad Ali

It is not very wrong to say that Rangers is involved in direct contact with the criminals of Karachi, i.e., the famous gang war criminals, dacoits, extortionists and even minor firing incidents which are very often politicized. 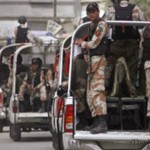 In the early 1980s, when Rangers had no intervention in the city scenario, people were still afraid of the police. The drug racket and heroine smugling was not at this level (please compare the drug statistics), the arms were not so heavily available (atleast not to everyone) and the city was more peaceful than it is. According to PAK Army’s website (which controls the Rangers), Rangers had come to Karachi to correct it’s situation, but it went the other way. Why? Because of Afghan migrants, because of PPP, because of MQM, because people returning from the war had come to Karachi? All the things might have some credibility, but the fact is, that it is after the intervention of Rangers all the criminal activities in Karachi proliferated. Why do Rangers refuse to go in Lyari? The authority of Rangers, after the Sarfaraz Shah case and Murad Ali case

can not be simply labelled as a failure of the whole interior ministry itself. Yes, on paper, the Rangers do come under the

order of the Ministry of Interior, but the truth is that Rangers is Pak Army’s tool for local and easy operations in the city. Why are the culprits of the Sarfaraz Shah case freed on courts order? The prosecutor never said on the media that he

really forgave those Rangers, he said, ‘Maine sab kuch Allah pe chor diya hai’. How could it NOT be that he was not pressurized to take his plea back?

Rangers guard the entrance of Lyari today, one of the most prominent NO-GO Areas.

For those of you who
“On the eve of 10th of Muharram (the night of 9th Muharram), year 2012 (late 2012), this happened. There is a very famous procession in Rohdi (Sukkur District). People were starting to travel towards Rohdi by train from Khairpur to Rohdi. Every year, the train stops at the Khairpur station, but this year it didn’t stop. The people started protesting at the station, asking why did the train not stop? The demanded that the train be stopped so that they could reach Rohdi. But strangely, the train was not stopped. Instead of coming close to accepting (or atleast listening politely to their demands) the Rangers started misusing their authority. They charged on the protesters, beating some of them. The reaction was obvious. Some people, as usual, fired 2 3 bullets in the sky and this is what the Rangers was waiting for. After that, the Rangers started opening fire and fired shells on the protesters. It was a stampede. Everyone dispersed. The Rangers penetrated into a residential area, Khairpur Luqman and started arresting and beating people who were walking towards the area, holding their flags (the Shi’ite Alam) and almost every youngster or adolescent wearing black shalwar qameez (what Shi’ites usually wear in Muharram). Around 100 people were effected in the whole scenario, where the ones arrested were not found with any weapons on. The media was stopped (Geo, Sama, Dawn and KTN were present their) and the people belonging to the free media were stopped. The ones who were beaten up, some of them were hospitalized. A local Shia cleric, whose name was Agha Asad Iqbal came up for negotiations but the Rangers clearly refused to dialogue with him. He even said, ‘you can not impose your ‘Fauji Giri’ on me’. There was some harsh dialogue, but the Rangers kept on with it’s role.”want hard core evidences on these things, please inquire and reflect as we did before writing this. If you had everything being showed on the media regarding everything, than everything would have been stable because the truth would have been the only thing our biased media shows (hypothetically). Below is the account of an eye witness who saw all this. You can inquire about it and send us any queries back in form of comments or anything related to this.

Unfortunately, we as independant bloggers can do nothing but write on regarding these atrocities. There is no justification to ask for the higher authorities to take notice of anything, because they simply don’t have anything in their hands.

Pakistan has become handicapped at the hands of these Armed forces and it’s high time they are brought to serious accountability by who-so-ever concerned. The general population must think over it and realize their true enemies. Try going over to a police officer and talk to him about what authority he has.

The author is a political junkie with special interests in law enforcement, metropolitan security concerns and a few chunks of deep rooted politics.