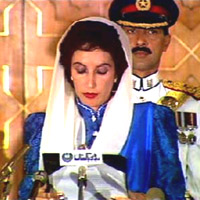 I would like to share with you Mohtarma Benazir Bhutto’s important and private letter which she had sent to me in 2002 with regards to Afghanistan. The message helps us understand BB’s thinking and policy towards Afghanistan. I have removed the last part of message as it wasn’t related to the topic.

Thank you for the message informing about your recent visit to Afghanistan.Please extend my appreciation to Dr Rasool Amin Education Minister of the Interim Government of Afghanistan for his kind remarks about me.

I welcome your proposed joint initiative to launch a peace movement to promote peace ,progress,human rights and demilitarisation of South and Central Asia.The most populous region of the world comprising South and Central Asia which is rich in natural resources but poor in economic indicators deserves a better deal .An initiative to improve the quality of life of over one fourth of humanity in the aforesaid region can bank on my unqualified support.

Before launching the movement, however, there is a need to complete the home work and involve in that process a distinguished group of dedicated persons of proven integrity . There could be a need to wait for political dust to settle down in war torn Afghanistan before the proposed campaign can take off..The Loya Jirga will hopefully bring peace and stability in our immediate neighbourhood and prepare the ground for the kind of mission in mind.

As regards our relationship with Kabul it can not be overemphasized that Pakistan Peoples Party is the natural ally of post Taliban Afghanistan.

PPP was in forefront in opposing Taliban rule and the first Pakistani Party in 1998 to call upon Islamabad to sever ties with it.

Let me reiterate that only a democratic Pakistan can overcome the unnecessary bitterness of the past and help the war ravaged region to move in the direction of peace, stability and prosperity of the vast region under consideration. The establishment of civil rule in Pakistan will benefit not only the region but also the whole world immensely.

Meanwhile I endorse your proposed initiative, the details of which need to be worked out in consultation with all concerned. In this connection, I would depute Ambassador Bashir Malik in Islamabad to coordinate with you on the efforts. I am endorsing this note to Ambassador Malik.

On a separate note, I am associated with a non profit organisation called the SZABIST…….