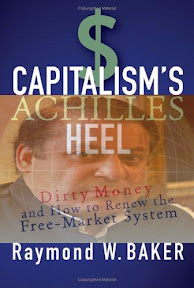 Raymond Baker in his book Capitalism’s Achilles Heel: Dirty Money and How to Renew the Free-Market System explains the dynamics of how dirty money works. In his book he elaborately covers the corruption in Pakistan by thrice PM Nawaz Sharif:

Corruption and criminality run from the top down, with the political class constantly looting the national treasury and distorting economic policy for personal gain. Bank loans are granted largely on the basis of status and connections. The rich stash much of their money abroad in those willing western coffers, while exhibiting little inclination to repay their rupee borrowings. Pakistan’s recent history has been dominated by two families—the Bhuttos and the Sharifs—both merely tolerated by the military, the real power in the country. When it comes to economic destruction, there’s not a lot of difference among the three.

Pages 82-85 of the book cover the section on Nawaz Sharif: While Benazir Bhutto hated the generals for executing her father, Nawaz Sharif early on figured out that they held the real power in Pakistan. His father had established a foundry in 1939 and, together with six brothers, had struggled for years only to see their business nationalized by Ali Bhutto’s regime in 1972. This sealed decades of enmity between the Bhuttos and the Sharifs. Following the military coup and General Zia’s assumption of power, the business—Ittefaq—was returned to family hands in 1980. Nawaz Sharif became a director and cultivated relations with senior military officers. This led to his appointment as finance minister of Punjab and then election as chief minister of this most populous province in 1985. During the 1980s and early 1990s, given Sharif ’s political control of Punjab and eventual prime ministership of the country, Ittefaq Industries grew from its original single foundry into 30 businesses producing steel, sugar, paper, and textiles, with combined revenues of $400 million, making it one of the biggest private conglomerates in the nation. As in many other countries, when you control the political realm, you can get anything you want in the economic realm.

With Lahore, the capital of Punjab, serving as the seat of the family’s power, one of the first things Sharif did upon becoming prime minister in 1990 was build his long-dreamed-of superhighway from there to the capital,Islamabad. Estimated to cost 8.5 billion rupees, the project went through two biddings. Daewoo of Korea, strengthening its proposals with midnight meetings, was the highest bidder both times, so obviously it won the contract and delivered the job at well over 20 billion rupees.

A new highway needs new cars. Sharif authorized importation of 50,000 vehicles duty free, reportedly costing the government $700 million in lost customs duties. Banks were forced to make loans for vehicle purchases to would-be taxi cab drivers upon receipt of a 10 percent deposit. Borrowers got their “Nawaz Sharif cabs,” and some 60 percent of them promptly defaulted. This left the banks with $500 million or so in unpaid loans. Vehicle dealers reportedly made a killing and expressed their appreciation in expected ways. Under Sharif, unpaid bank loans and massive tax evasion remained the favorite ways to get rich. Upon his loss of power the usurping government published a list of 322 of the largest loan defaulters, representing almost $3 billion out of $4 billion owed to banks. Sharif and his family were tagged for $60 million. The Ittefaq Group went bankrupt in 1993 when Sharif lost his premiership the first time. By then only three units in the group were operational, and loan defaults of the remaining companies totaled some 5.7 billion rupees, more than $100 million.

Several offshore companies have been linked to Sharif, three in the British Virgin Islands by the names of Nescoll, Nielson, and Shamrock and another in the Channel Islands known as Chandron Jersey Pvt. Ltd. Some of these entities allegedly were used to facilitate purchase of four rather grand flats on Park Lane in London, at various times occupied by Sharif family members. Reportedly, payment transfers were made to Banque Paribas en Suisse, which then instructed Sharif ’s offshore companies Nescoll and Nielson to purchase the four luxury suites.

In her second term, Benazir Bhutto had Pakistan’s Federal Investigating Agency begin a probe into the financial affairs of Nawaz Sharif and his family. The probe was headed by Rehman Malik, deputy director general of the agency. Malik had fortified his reputation earlier by aiding in the arrest of Ramzi Yousef, mastermind of the 1993 World Trade Center bombing. During Sharif ’s second term, the draft report of the investigation was suppressed, Malik was jailed for a year, and later reportedly survived an assassination attempt, after which he fled to London. The Malik report, five years in the making, was released in 1998, with explosive revelations:

The report went on to state that “The extent and magnitude of this corruption is so staggering that it has put the very integrity of the country at stake.” In an interview, Malik added: “No other leader of Pakistan has taken that much money from the banks. There is no rule of law in Pakistan. It doesn’t exist.”

What brought Sharif down in his second term was his attempt to acquire virtually dictatorial powers. In 1997 he rammed a bill through his compliant parliament requiring legislators to vote as their party leaders directed. In 1998 he introduced a bill to impose Sharia law (Muslim religious law) across Pakistan, with himself empowered to issue unilateral directives in the name of Islam. In 1999 he sought to sideline the army by replacing Chief of Staff Pervez Musharraf with a more pliable crony. He forgot the lessons he had learned in the 1980s: The army controls Pakistan and politicians are a nuisance. As Musharraf was returning from Sri Lanka, Sharif tried to sack him in midair and deny the Pakistan International Airways flight with 200 civilians on board landing rights in Karachi. Musharraf radioed from the aircraft through Dubai to his commander in Karachi, ordering him to seize the airport control tower, accomplished as the plane descended almost out of fuel. Musharraf turned the tables and completed his coup, and Sharif was jailed.

But Sharif had little to fear. This, after all, is Pakistan. Musharraf needed to consolidate his power with the generals, and Sharif knew details about the corruption of most of the brass. Obviously, it is better to tread lightly around the edges of your peer group’s own thievery. So Musharraf had Sharif probed, tried, convicted, and sentenced to life in prison, but then in 2000 exiled him to Saudi Arabia. Twenty-two containers of carpets and furniture followed, and, of course, his foreign accounts remained mostly intact. Ensconced in a glittering palace in Jeddah, he is described as looking “corpulent” amidst “opulent” surroundings.  (Source: Teeth – with some changes)