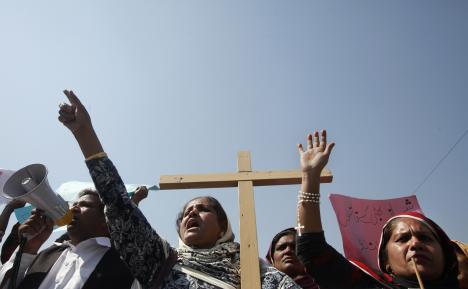 Lahore – Becoming aware of the discrimination, injustice, prejudice of whom Christians in Pakistan face and are victims, about 3% of the population, and the necessity to report these issues to the new government: with this intent Christian leaders of different denominations, priests , scholars, lawyers, human rights activists recently met in Lahore, noting “the deteriorating situation of Christians and the growing threats from Muslim extremists towards minorities.” The result of the meeting was a Memorandum, sent to Fides Agency, which takes stock of the situation and will be sent to civil institutions. Fides offers a summary of the text, which indicates the most burning issues regarding the Christians life in Pakistan.

1. Religious discrimination. Christian communities and associations receive frequent complaints on these issues. Minorities live in fear and are discriminated against religion, culture, social class. Christians are victims of abuse of human dignity and generally regarded as “second class citizens”.

2. Economic persecution. The law states that 5% of public jobs destined to religious minorities are not implemented by the central government. In many public services only Muslims are accepted, while Christian employees do not receive their salaries. Christians are deprived of the right to work in the private sector only because of their faith.

3. Religious hatred: is one of the most serious problems. Radical groups and Islamic extremists argue that Pakistan is a land reserved for Muslims and that there should be no non-Muslim Pakistanis. This mentality creates insecurity among minorities.

4. Blasphemy Law: The promulgation and the abuse of the blasphemy law against Pakistani Christians is one of the biggest concerns. The law continues to be abused and misused for private disputes, and does not provide penalties for those who formulate false accusations.

5. Violence and impunity. Christians are victims of violence based on religion. There have been sensational mass episodes but also in the private and social life. Violence remains unpunished most of the time.6. Prejudice against textbooks and schools. Public schools in Pakistan are “factories of hatred.” In school textbooks that are used discredit Christian and Hindu minorities and contribute to creating a climate of hatred and prejudice in the minds of children and young people.