Najam Sethi was appointed as the acting chairman by Prime Minister Nawaz Sharif. -Photo by AFP.

When Najam Sethi sat at the International Cricket Council’s (ICC’s) Annual Conference in London on Wednesday, he must have felt a little out of place.

For someone accustomed to holding his own as one of Pakistan’s savviest media personalities, the discomfiture of performing as Acting Chairman of Pakistan Cricket Board (PCB) in the company of well heeled chief executives of other full member countries would have been daunting.

These chief executives are required to deal with contentious issues, which necessarily bring into play in-depth knowledge, sharp skills to demonstrate viability of ideas and a certain ability to negotiate for a favourable response, especially when an issue goes down the voting route.

Unlike the chief minister stint, which had a mandatory limit, controversy over his nomination as PCB chief is likely to accompany him wherever he goes until he calls time or a gavel clinches the issue before that — as is often the case these days in Pakistan.

The Islamabad High Court is already seized of the matter. A petition has been filed by Abdullah Tahir, an amateur cricketer and law graduate, seeking Sethi’s removal, on grounds that his appointment is a violation of the PCB constitution.

The IHC has quite a task at hand since it was only recently that Justice Shaukat Aziz Siddiqi suspended the previous chairman, Zaka Ashraf, in response to a petition challenging his “dubious” election under the new PCB constitution and ordered the Ministry of Inter-Provincial Coordination to appoint an interim chief in his stead.

The commotion surrounding Sethi’s new role is not without basis. For starters, even though the job is temporary, the veteran journalist has never been considered to have intricate knowledge of the game, much less having played at the highest level.

To be sure, there have been administrators before him, who have made the count with or without experience, but Sethi has never held a post associated with a sport touted as second religion in this part of the world.

This brings into sharp focus the intriguing appointment made by Prime Minister Nawaz Sharif — himself an inveterate cricket-lover, who overlooked the credentials of someone as erudite as the Cantabrigian Majid Khan, a former Pakistan captain and an astute cricket administrator.

The perception that Sharif didn’t want Majid to hold fort because he is related to Pakistan Tehreek-i-Insaf chairman (PTI) Imran Khan doesn’t stick because the two cousins are estranged with Majid not having spoken to Imran after the then-skipper first dropped his maternal cousin from a Test eleven on the 1982 English tour.

A source privy to the surprise development confided to Dawn.com, on condition of anonymity, that the ‘out-of-the-box’ appointment has come at the request of a leading media house eying lucrative broadcast rights of Pakistan’s forthcoming cricket series. The current ruling party is said to have long benefited from its popular reach.

What this will do for the interests of Pakistan cricket is a moot point. Transparency International Pakistan has, through an official communication, even urged the ICC to take notice of the appointment that it says is unlawful under the PCB constitution, which stipulates that only board members can elect an acting chairman in the event of the post falling vacant for more than 45 days.

After initially pledging to sort out the mess at the PCB and pleading for time, Sethi is now vowing to vacate the “temporary” slot once he is through with the ICC conference ending Saturday, approving the team for the tour to the West Indies and conducting the election of a full-time chairman.

That Sethi has been ill-at-ease in the new role is evident from his admission of being a little lost with the rather large PCB empire — more than 900 employees weighing down the Titanic, and whose departmental heads notoriously work at cross purposes.

The rough and tumble

Sethi got a first glimpse of the challenges — other than the legal — when coach Dav Whatmore reportedly tried to assert himself by making the pitch that Team Pakistan (that sunk to a new low in the just-concluded Champions Trophy) only needed one change — dropping Imran Farhat — before going on the Caribbean cruise. He was, mercifully, rebuffed.

The interim chief’s avowal to seek a reduction in the five-year sentence of disgraced young pacer Mohammad Aamir for spot-fixing also betrayed a lack of understanding the rules. Unless the law itself is changed — five-year is the minimum term for the offence under review — his plea “for God’s sake to reduce his ban” is unlikely to melt the governing body.

Even though politics and sports mix for negative reasons in some other countries as well, Pakistan is a standout.

The Pakistani run of play is generally a sombre reflection of its polity, the Alice in Wonderland kind of cricket board and a national team boasting characters right out of a comic book.

If you ever get confused thanks to the muddled modus operandi — and the chances are, you often will — know that it is the rule rather than an exception. Perhaps, you will also come to appreciate the reason for the cavalier nature of Team Pakistan and why it often flatters to deceive.

In this case, author Grantland Rice’s assertion that “it doesn’t matter whether you win or lose, it’s how you play the game” is turned on its head. Prime Minister Nawaz Sharif has only provided the latest example of how gate crashing the party is still the norm.

Cricket, they say, is a funny game — a reference to its unpredictable nature. Probably, funnier still will be Sethi’s call to make his presence felt in an unchartered territory. But there is now a colourful tinge to the national soap opera with rival Imran Khan, who knows a thing or two about the game, upping the ante with his own plan to revive Pakistan cricket’s lost glory in Khyber-Pakhtunkhwa, where his party heads the government.

The writer is a senior journalist based in Islamabad. 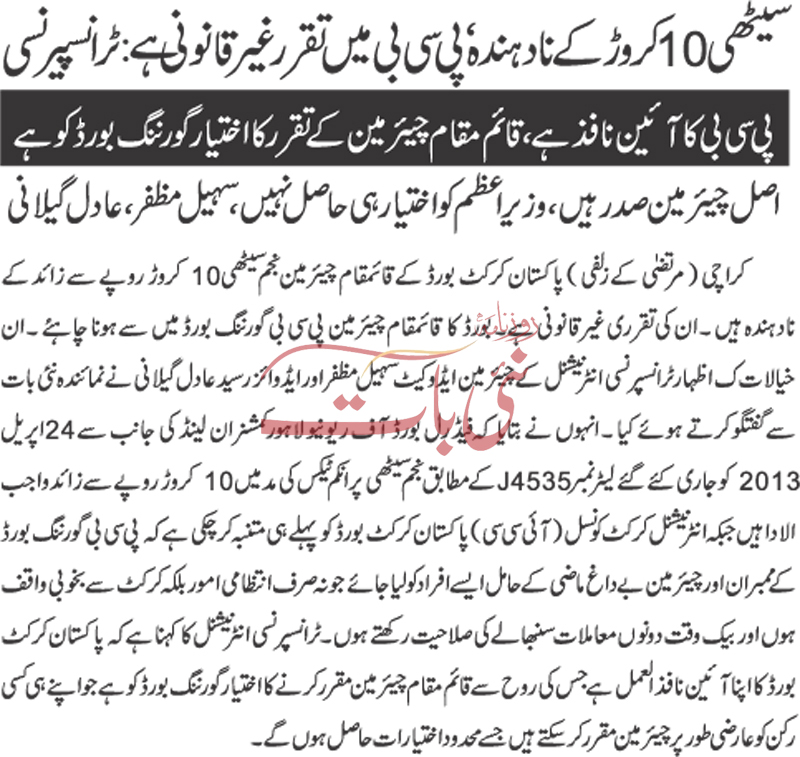