Home  »  Original Articles   »   Is Nawaz Sharif up to combating the organised terrorism? – by A Z 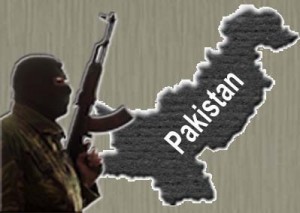 As I listen to the two videos in Urdu appended below, they stand out more for the frustration and helplessness in the voice of both the speakers than their depiction of the dreadful state of affairs. The first video includes Faisal Raza Abidi, who talks about the recent incidents in Baluchistan including an attack on female students and then a hospital in Quetta, which was purported to target Shia girls and has been owned up as such by the LeJ. The second video features the MQM’s leader Haider Abbas Rizvi lamenting the fact how Shias are being identified and killed with utter impunity in Karachi. Mr Rizvi exposes the administration’s apathy by showing how the ECP allowed SSP’s Aurangzaib Farooqi to run in the election and to orchestrate an overtly sectarian campaign.

From Khyber to Karachi to Nokundi, Pakistan is being painted red with the blood of its sons and daughters. Fundo-Terrorism, Sectarian-terrorism, Narco-terrorism, Separatist-terrorism, Mafia-terrorism – you name it and we are not only self-sufficient but also endowed with great prowess to export. We saw its first startling manifestation in the wake of Pakistan’s dabbling into Afghan Jihad. Another facet was revealed when the overtly sectarian outfits like the SSP cropped up and started getting rid of those who they considered infidels. And finally, after NATO’s attack on Afghanistan following the 9/11, all hell broke loose. This depicts the trajectory of once peaceful Pakistan’s evolution into a nursery for organised terrorism as organised crime has almost entirely welded with terrorism.

Luckily we have not experienced anything like Nazi-sponsored Holocaust, Tutsis’ Genocide, or Pol Pot’s Bloodbath. The death toll at around 50,000 over ten years is also much less than the 100,000 killed in Syria in just over two years. This is owed to the generally pacifist culture of the subcontinent’s Indus and Ganges valleys, which has often found itself under siege from the barbarism descending from northwest of the subcontinent. However, the very fabric of this culture is being shred and unless we do something about it in earnest, we will not escape the wrath of a bigger catstrophe. It is very simple; our main enemy in the next few decades will be terrorism, with some other countries using the terrorist organisations as a front on our soil. Religion and sect are used as the cloak to hide the profane ambitions of the protagonists.

Every part of Pakistan has been affected by militancy/terrorism during the last two decades. Even though Punjab has been relatively quiet on this front for the last many years, it too has witnessed a number of incidents of bombing the Sufi Shrines, attacking Shia and Ahmedi gatherings, and burning down Christian dwellings. The country has a number of militant organizations which, together with their splinter groups, number in hundreds. Most of these organisations are intertwined and have developed a formidable network spanning the entire national territory and many other countries.

Those who advocate placating the terrorists must know that in the world’s modern history talking people out of using violent means has rarely, if ever, resulted in peaceful endings. Even if a temporary lull is achieved, it only ends up being a precursor to bigger upheavals in future. On the other hand it may be tempting to think that a war against terrorism can be won by killing all the terrorists. In the real world, this naive plan doesn’t work. In Pakistan’s case too terrorism cannot be subjugated solely through mindless use of force but a few things must be understood by the nation as a whole.

One, terrorism cannot be effectively dealt with unless its origin and source of supply is understood and removed. For people to be pushed into war, to sacrifice their material, physical, psychological, social and spiritual well-being for a cause determined by others, basic psychological processes have to be activated and manipulated towards this end by appealing to primitive loyalties and religious duty and by arousing deep passions. Madrassas and pulpit fulfil this role.

Two, terrorism is also a form of war – a war between the victims and the perpetrator. We need to fight our war.

Three, use of force must be decisive and resolute.

Four, terrorism costs only a fraction of traditional guerrilla warfare -in terms of finances, men, efforts, and material- and can easily self-finance itself through crime or donors over a protracted period of time.

Five, in most cases terrorism transforms into a self-perpetuating organism which has little real interest in peaceful resolution of the issue.

Terrorism can be defeated only through a combination of various means. Terrorists always look to driving a wedge between the people and the state. Every time the terrorists blow up innocent victims, like in Mardan yesterday, the actual goal is to erode people’s trust in the state. While terrorists and their backers use fiendishly clever strategies for eroding this trust and fomenting resentment and hatred, our politicians are clearly not of much help either in inspiring the populace to bond with the state. Terrorists are defeated in a society when the large majority of the community feel that they can trust the State to maintain law and order and to work for the common good. Then ordinary people will never apologise for the terrorists attacking the state or its citizens. Otherwise, terrorists can always find freedom of action and hiding places in a society where majority are not their sympathizers but are not willing to support the state either. When terrorists find no apologists and are viewed with dislike by the vast majority of the general public, then the war on terrorism has been won. Pakistan is looking up to its new government to gain the trust and cooperation of the politicians, security forces, state institutions, and general population to formulate a long-term coherent strategy to combat terrorism.

Is Nawaz Sharif up to it?