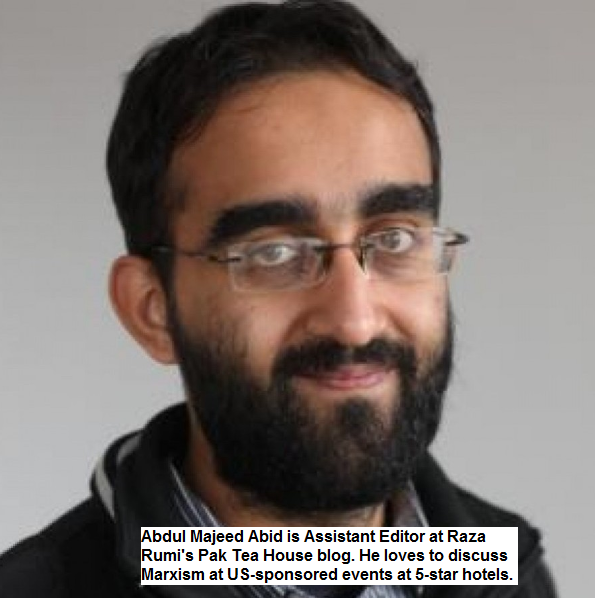 “Organised in Karachi by PeaceNiche, in collaboration with the United States Consulates in Lahore, Islamabad and Karachi, it was supposed to be a gathering of social media enthusiasts from India and Pakistan.

It was an invite-only affair and most people who were invited were recommended by other people. Participants from Lahore and Islamabad were sponsored by US Consulates in Lahore, Islamabad and Karachi for their travel and accommodation.

It was my first visit to Karachi and I was really excited about having acquired this opportunity. I boarded the plane from Lahore on the eve of July 12, along with the rest of participants from Lahore. The visit was not only an opportunity to interact with new people but also to get some much needed respite from the hectic schedule at the hospital.

During the flight, I had a long amicable chat with my seat mate whom I discovered was a fellow participant. We were transported to Avari hotel and allotted rooms. When I reached my designated room, I had to pinch myself back to reality; the rooms were spacious and comfortable and had attached baths separated by glass walls; pampered was an understatement.

We were offered BBQ dinner at the top floor of the hotel and that was where we were fortunate enough to meet our fellow Indian participants including Onir, Karuna John, Jugal Mody, Venket Ananth, Sabbah Haji, Annie Zaidi, Raheel Khurshid and Sanjay Rajoura. I, being a vegetarian, found common ground with one of the participants and enjoyed a rather pleasant conversation. Later, I took part in an interesting discussion about Marxism, class struggle and the Pakistan Movement.

I wouldn’t have met many of my favourite people at one place if I had not come to the mela, including Nadeem F Paracha (one of my mentors), Ali Chishti, Marvi Sirmed, Beena Sarwar, Mohsin Sayeed, Muhammed Hanif, Faiza S Khan, Musharraf Ali Farooqi, Declan Walsh, Amir Mughal, Murtaza Solangi, Hassaan Belal a.k.a mighty, Sana Saleem, Ali Arqam, Zebunnisa Burki and the wonderful people from across the border.”

It was a unique event that gave faces to those people who have just been known to us through Twitter, Facebook and the likes. The tremendous effort by Sabeen Mahmud and her team at PeaceNiche should be applauded, and I would like to personally thank PeaceNiche and the US Consulate staff for their co-operation, hospitality and congratulate them for hosting such a successful event. Events as such should take place at least once every year.

I left the rejuvenating event with a fresh perspective, a heavy heart, new friends and countless great memories. Until next year! 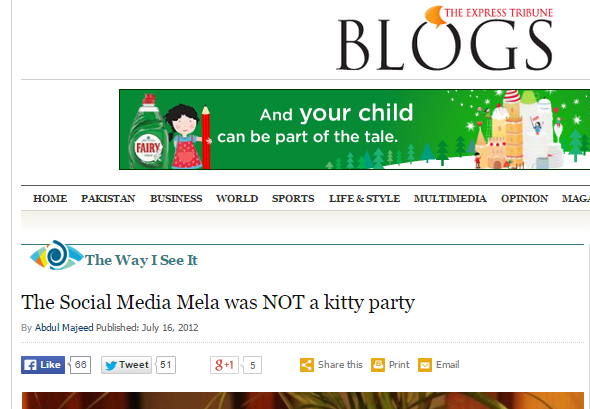 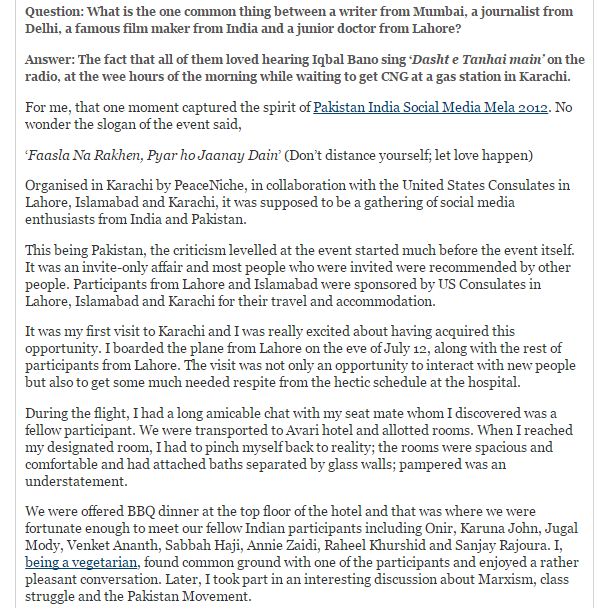 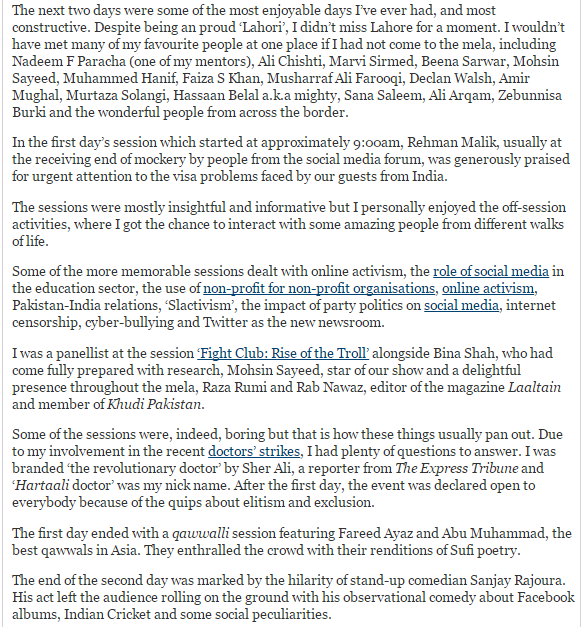 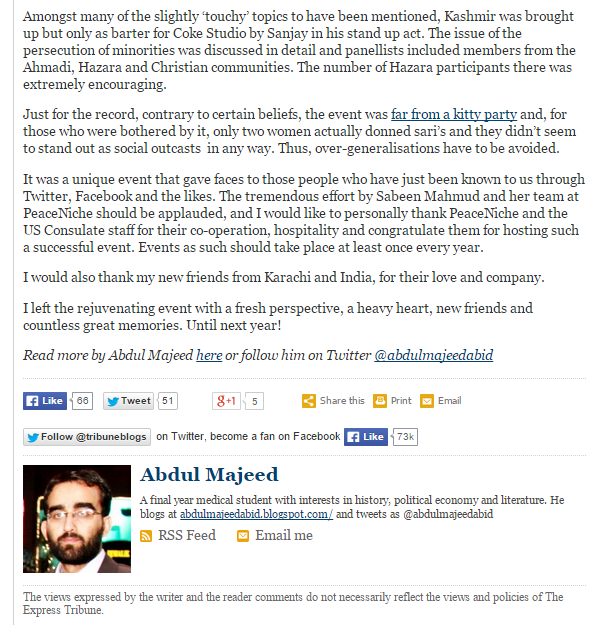 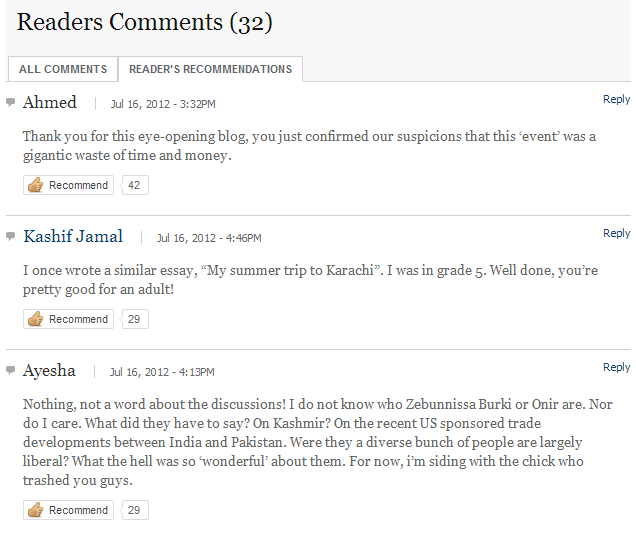 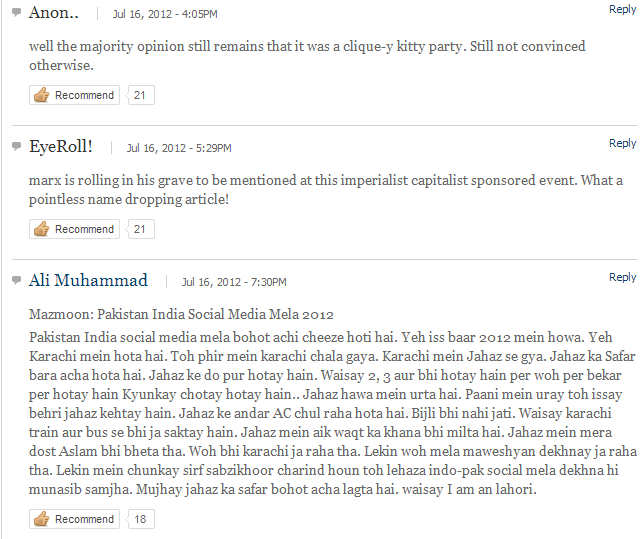 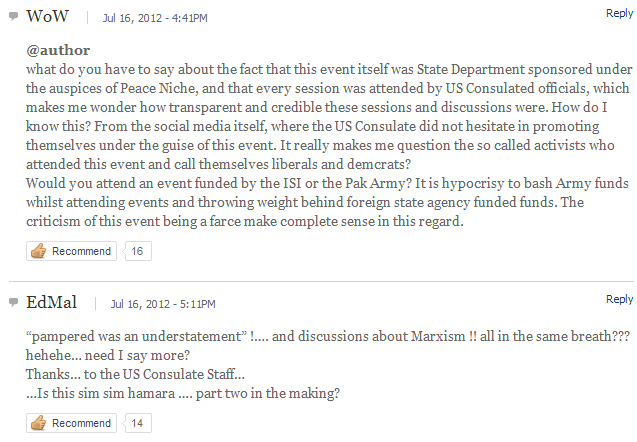