Pakistani protesters burn a representation of a U.S. flag to condemn a drone attack in the Pakistani tribal area of Waziristan that killed Taliban leader Waliur Rehman, on May 30, 2013 in Multan, Pakistan.

While speaking at the Aspen Institute in February, former special operations chief Army Gen. Stanley McChrystal recounted an incident in which his team employed a fatal drone strike in Afghanistan against a man who was digging next to the side of a road in the middle of the night, exhibiting the kind of behavior consistent with an insurgent planting a roadside bomb. It turned out to be a farmer who was rerouting the flow of water to an irrigation ditch at a pre-scheduled time set up by a local farming commune, the retired general said.

The U.S. will now rely more on “personality strikes,” like the one used against Rehman, in which drones hunt for specific people, not just any fighter. And it likely will not receive actual opposition from the Pakistani government in these instances.

This alleviates Sharif from following up on his campaign pledge to negotiate with the Taliban, which Kaltenthaler says “is probably not going to lay down its arms and say ‘We’ll stop the attacks simply because you’re going to talk to us.'”

“Behind the scenes, there is probably relief,” he says. “But they can’t say that publicly. They have to stick to the script.”

Fair also points out that not all Pakistanis criticize the strikes. Twitter user @AdaKhakwani, who says she is based in Pakistan, wrote of her thanks to the U.S. for eliminating a high-profile Taliban militant. 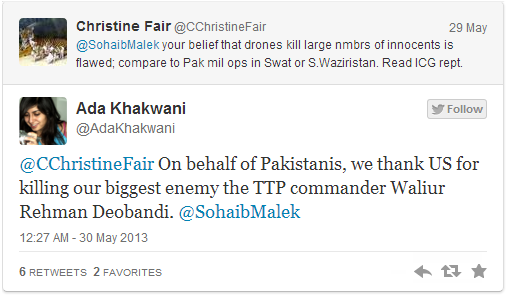