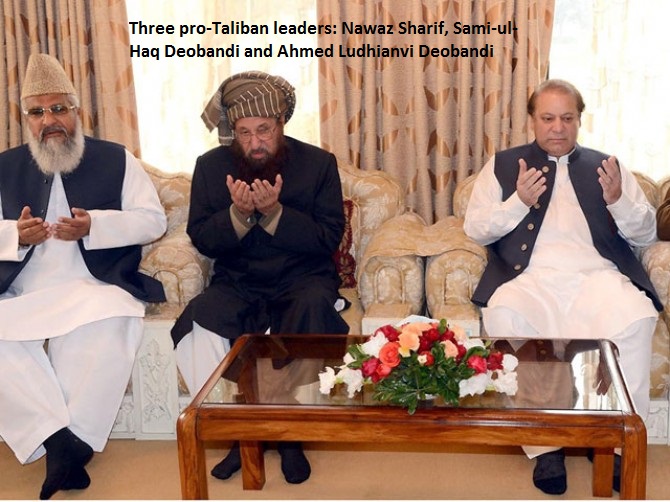 Quite a few liberals including some of us at LUBP are unhappy with Nawaz Sharif for calling for a dialogue with the Taliban. It has been said that by desiring to bring the Taliban to the negotiating table, he has shown that the state of Pakistan has become weak and the Taliban are on par with state now.

There are other objections too such as that Nawaz Sharif has given the message that violence pays. You kill innocent people with impunity, and in the end the likes of Nawaz Sharif reward you by negotiating a ‘peace’ settlement with you.

These are justified objections. But they do not put things in their context. People fail to realize that both Nawaz Sharif (and his PML-N) and the Taliban (including their affiliates in Sipah Sahaba ASWJ) are part of the same ideology which seeks to conquer Pakistan as a state and society. Both of them are the result of the Islamofascist mindset created by Saudi Arabia and the ISI in order to radicalize the Pakistan society in the 1980s when the Soviet Union was the Evil Empire.

Since the end of the Afghanistan war in 1988, Nawaz Sharif has been carrying on the ISI-Saudi agenda. When in May 1988, General Zia dismissed the Junejo government, Nawaz Sharif   applauded the former. After Zia’s death, he carried on his mission by making Punjab a hatchery of Islamofascists. He allied himself with Osama bin Laden against Benazir Bhutto in order to remove her from power. In 1999, he almost installed himself as Pakistan’s Amirul Momineen.

During the Shahbaz Sharif’s rule in Punjab from 2008 to 2013, the entire province became the headquarters of the Lashkar-e-Jhangvi (LeJ, currently operating as Ahle Sunnat Wal Jamaat Deobandi ASWJ) and the Punjabi Taliban where the Shia genocide was routinely planned. Christians, Sunni Barelvis and Ahmadi Muslims were regularly cut down in Punjab, the murderous mobs led by PML-N leaders and legislators. In Lahore, the Sipah Sahaba/Taliban killed Sunni Sufi cleric Maulana Sarfraz Naeemi, and hours later Shahbaz Sharif held a press conference where he said, “The Taliban are our brothers!”

Nawaz Shiarf has been making electoral alliances with the Takfiri Deobandi ASWJ/Taliban. In the end, the Taliban did for Nawaz Sharif what no one else, even General Zia, could do for him: They gave him a free hand to campaign all over Pakistan for the just concluded elections while the liberal parties were denied their basic democratic right to campaign. The Taliban in the past have said that they only trust Nawaz Sharif and other Islamofascist parties like the JI and PTI.

Nawaz Sharif has won the election because of the Saudi money and the manipulation of the election  by the Taliban. It was part of the deal that one brother (Nawaz Sharif) will win and then invite his fellow brethren (the semi-Wahhabi Taliban) and lay down the foundations of a ‘New Pakistan’. The Saudi-Taliban mafia, facilitated by the ISI, has fulfilled its promise by making Nawaz Sharif win. Now it is his turn to execute his part of the deal.

Pakistan’s liberal and secular elements can go to hell, but Islamofascism must win. Nawaz Sharif will rule the country guided by the Salafi Saudis from Riyadh and protected by the Taliban-ISI all over Pakistan. The rest will be known as mere details of history.