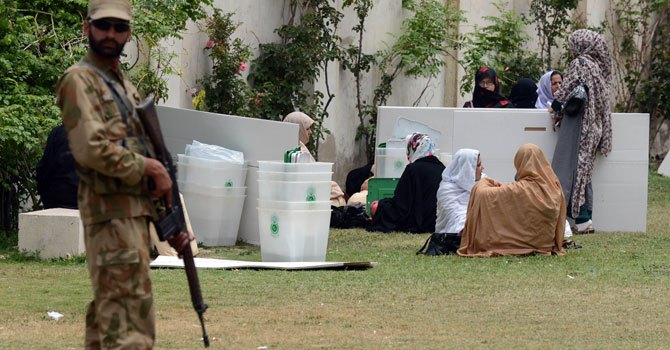 Pakistani election 2013 in Balochistan, have been widely viewed by international and local political analysts as a referendum between those who ask for Baloch rights within Pakistani framework and those who seek an independence Baloch state.

The pro-independence Baloch nationalist parties boycotted the Pakistan’s election 2013, on the ground that Balochistan is an occupied territory, and Pakistan has no right to conduct any elections there.

When political commentator’s started to depict the election as referendum, saving themselves from future humiliation the candidate downplayed the turnout of voters not because of the boycott and said the new polling system introduced by the Election Commission of Pakistan (ECP) has almost eliminated the chances of ‘bogus votes’.  At the same time the Baloch resistance forces made it clear, that low turnout of voters in the election is their aim, by which the world will know how legitimate the future puppet was.

To backup their confrontation to the Baloch seeking independence, other than pitching the pro-Pakistani Baloch nationalist against them, the establishment used the state brutal machinery to intimidate Baloch to select their candidate between “Pepsi Cola and Pak Cola” in the election.

Kidnapping of Naseebullah Baloch is one clear example of state intimation. He was kidnapped from Turbat on 28 April 2013 and his mutilated body was found from Surjani town, Karachi on 2 May 2013 with a rope tied around his neck. It is an open secret on the streets of Turbat that one candidate to the provisional parliament asked him to vote for him in the upcoming elections, on his rejecting the validity of the election itself he was kidnapped a few days later. A message through a family member of the candidate was given to Nasseebullah’s family that if they cast their vote their son would be released they also rejected the election. His body was dumped in Karachi, to make him an example for other. Blackmailing the kidnapped person’s family for votes by the Pakistani state’s intelligence agencies has been observed throughout Balochistan.

The other tactics use by the state apparatus to intimidate people was to confiscate their Computerised National Identity Card (CNIC), and ask them to collect it from their polling station on Election Day. They were told by state forces in uniform that on non-attendance they will face the consequences, as their photo and address is with them.

People also reported that Pakistani intelligence persons in plain clothes posed as election campaigners knocked at their door and told them that, their vote will not affect the election result but if they don’t vote it will affect them personally.

Under these unfavorable conditions pro-freedom political parties launched a campaign to boycott the election. They were denied free movement, their only way to communicate with the masses was the social media, and some newspapers were brave enough to print their news. To neutralize the harassment atmosphere on pro-freedom camp, Baloch Sarmachar’s (freedom fighters) used people’s power to restrict the movement of Pakistani camp’s election campaign.

The state with all its resources, backed by Pakistani media and its intellectuals could not convince Baloch nation to participate in its election. Pakistani army with its guns literally at their throat could not force Baloch to go to its staged polls. Against all odds and limited resources, pro-freedom political parties and Baloch Sarmachar’s resisted the onslaught of Pakistani state and delivered their message to the masses.

Three days strike and a complete wheel jam followed by empty polling stations on the Election Day on May 11, 2013. Presiding officers with their ballot papers did not show up in many polling stationed throughout Baloch dominating areas in Balochistan. Even after fabricating the election results the state could show only a turnout of 1.6% to 3% of voters in Baloch areas.

Baloch people have given their verdict, it is loud and clear, they have rejected Pakistani state and its institutions. Now it is upon the Baloch leadership who consider themselves patriotic and nationalist to drop their petty differences and provide Baloch nation a united platform. A united front can only convert the charged political atmosphere in Baloch society to its logical conclusion, which is the freedom of Balochistan.