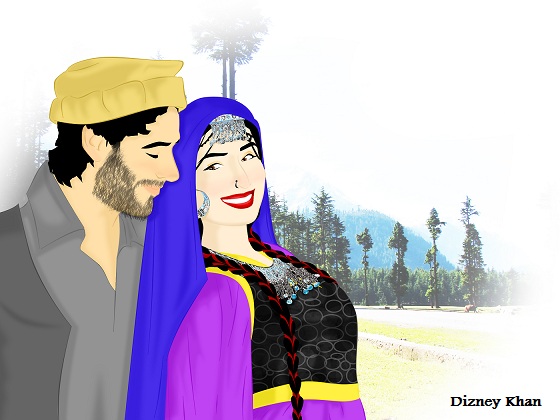 By writing on Pashtun women’s plight with the hands of social stigmas, I am not arguing that non-Pashtun women are free of such problems. Rather, writing on such issues means that we have to find the courage to face the reality and speak up about it; to come out of a denial mode. Unless we speak out against our problems, we will not be able to think critically and find solutions for them. This piece is also not aimed at generalizing about Pashtun women’s social situation, since there are exceptions in everything and everywhere.

Pashtuns are famous for being very romantic, and perhaps rightly so. There are hundreds of love stories in Pashto literature that talk about lovers and their unattainable happily-married-ever-after lives. Fateh Khan and Rabia, Jalat Khan and Shamayila, Musa Jan and Gul Makai, Yousaf Khan and Shair Bano, Talib Jan and Gul Bashra, Zareef and Maabai, Adam Khan and Durkhanai, Momin Khan and Sheerino, Shadi and Bebo, Khushkyar and Shah Tareena, Qutab Khan and Nazo, Taj Mohammad and Namro, Deli and Shaho are some of the most famous Romeos and Juliets of Afghanistan. Unfortunately, the Pashtun society is also one of those that celebrate lovers after they die as a result of their love. Usually, no-torment and no-death equals to no legend. Wrong traditional practices have been one of the most significant parts that all the stories of the lovers mentioned above have in common.

Expressing interest in the opposite sex or expressing love when not married to them is deemed unethical and the act of people with “loose” character. The fear of being exposed to the whole world is an obstacle in getting married according to one’s own wish and this results in  not being able to create an understanding with the person who might be a potential life partner.

Time has changed and so has the traditional practices but in most parts of the Pashtun region, love marriage, in general, is still looked down upon. There are some usual perceptions of those who choose love-marriage over arranged-marriage, although the two are not necessarily opposites. People believe that those who are rebellious to their parents choose to marry according to their own desire, that they are loose in their character to be doing so, that they, especially women, are imposing themselves on their potential partners. In more traditional families, love marriage is seen as a tool to uproot family ties; it is usual in many parts of the region where families, especially parents, oppose their children who want to marry according to their choice.

People generally expect a daughter-in-law to do her new family’s domestic chores even if they might have the capacity to hire a maid for that purpose. This expectation is the driving force behind asking for the hands of women who are less educated or are too young to be married since less educated women are believed to be more compromising and younger brides are believed to be gullible, easily molded into a person her in-laws want her to be.

Falling in love in other instances, too, is socially prohibited. These cases include political or well-to-do families who expect to keep ties with the family and therefore arrange their children’s marriages with their cousins or equally affluent families. They therefore do not want to accept anyone from outside the family. In such cases, usually, the first or second cousins are arranged or even forced to marry according to the family’s wishes. In other words, in such cases, people are even more restricted from falling in love or demanding to marry their love.

A man who wants to have a love marriage is seen by his family as a person ready to abandon them and his relatives for the sake of the woman he loves, even if he wants to continue to live in a joint family. Therefore, men generally tend to think that if they marry the women they love, they are disrespecting the feelings of their family and are doing a great deal of disobedience to their parents. Since a man is the source of income for the family, “losing” him to a wife he loves, who is not always an acquaintance to his family, is considered a risk. The wife, however, in a defensive mode, makes up her mind against her in-laws as a result of her assumption that they dislike her due to the above reasons. In many cases, it’s the in-laws who are on the defensive front. While this may be true in arranged marriages as well, the blame of the problems is somewhat shared by all the family members involved. Women, who succeed in separating their husbands from their parents and the joint family, insisting they want to live in a nuclear family, are seen as examples to warn other people about marrying the women they love.

Likewise, if a woman expresses her interest in marrying a particular man, her family might agree and show their support by arranging and attending the wedding party. But in the future, if anything goes wrong with her marriage, she gets no support from her family in settling the dispute or helping her get out of an abusive marriage, in the absence of a financial and judicial support. She bears the blame for choosing her own destiny and so is left to deal with her marital issues alone. When the marriage goes wrong, the husband’s side gains a bargaining power over the wife while she remains vulnerable to bearing the blame of breaking the norms by choosing her own husband and by being too “shameless” to refuse to compromise with the man she herself chose as her partner. As with wives, although most domestic abuse cases are perpetrated by men, some husbands also tolerate abuse from their wives because they chose the wife themselves; the family, instead of supporting them or becoming indifferent, starts to taunt and torment these men even more for their choosing their wives  with their own wish rather than with their families’ wish. As such, in some cases, men also bear an unfair behavior—e.g., domestic violence from their wives— and vice versa just to keep their honor (saving their faces) in front of their own families and to prove that they were right in their decision of choosing their own life partners.

A society that adores the stories of broken hearts and unfulfilled desires, sings the songs of love and passion, admires romantic poetry and loves love, ironically, is perhaps one of the most opposing to love-marriages in the today’s modern world. Lovers have to remain in contact with each other in secrecy and stay away from creating “controversies” as a result of speaking their minds without planning a proper channel through which they can convince their family members to support them in their intentions of marrying each other. Those who succeed in convincing their families get their marriages arranged through their families but such marriages still remain love-marriages since they are initiated by the couples and not by the families.