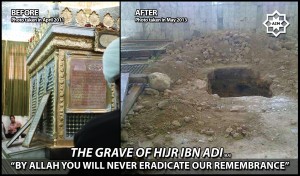 Gloroius Companion of the Prophet Muhammad (Peace Be Upon Him and His Holy Progney, SAWAW),  Hujir Bin Addi  (May Allah be Pleased With Him, RA ) has been brutalized once again. On May 2 a shocking news emerged in the Arab media; shrine of Hujir Bin Addi (RA) was destroyed, the grave was dug-in and remains were stolen by Al-Nusra Front. According to Arab media, even though 14 centuries have passed, his body was still intact. The fate of the holy body is not known.

Al-Nusra Front is a Wahabi-Salafi group fighting against the Syrian Government. Its ranks consist of Al-Qaida, Syrian and Saudi Wahabis, Salafis from North Africa and Deobandis from Pakistan. Al-Nusra Front is financially supported by Saudi Arabia and Qatar. Other Syrian rebels are openly supported by Turkey, USA and some Western countries seeking overthrow of Assad regime. However, USA has made an exception to Al-Nusra Front and has declared it a terrorist organization.

One of the aims of Takfiri Wahabi-Salafi-Deobandi-ism is to destroy shrines of the Prophet Muhammad (SAWAW), his family known as Ahlul Bait (PBU-Them) and his companions known as Sahaba. Shrines of eminent Islamic saints like Sheikh Abdul Qadir Jilani (AR) and other prominent personalities who promoted universal virtues of love and tolerance are also on their agenda.

As first part, graves of the only daughter of the Prophet, his three grand and great-grandsons were desecrated by in 20th century by Wahabis in collaboration with the ruling Saudi royal family. All these graves are located in Madina, Saudi Arabia. Two decades ago grave of the mother of the Prophet, Syeeyida Amina (Salam Allah Ho Alai Ha) was leveled off. Whereas, a mother is universally accepted as an institution, it is mind boggling, how people apparently believing in God can hit grave of Umme Nabi (SAAH) with iron.

Few years ago, another blasphemous shocked the faithfuls, shrines of two other great-grandsons of the prophet (PBUH) were dynamited in Iraq by Wahabi-Salafi Al-Qaeda.

Another Blasphemy Against The Family of Prophet

As yet another act of hate for the Prophet of Islam, on May 4, 2013, shrine of Jaafar ibne Abi Talib (RA) is burned down in Jordan. Hazrat Jaafar (RA) was a first cousin of the prophet and a loyal companion who during the early days of Islam had led first Hijra (migration) to Ethiopia.

The shrines of the Prophet (SAWAW), Hazrat Ali (AS), Imam Hussein (AS), Syeeyida Zainab (SAAH) and other grand-children of the Prophet Muhammad (SAWAW) are in danger. There is a grave anxiety among Muslims about the graves of Hazrat Abu Bakar (RA) and Hazrat Omar (RA) too — they could be dug-in and remains taken away.

Wahabi-Salafi-Deobandi-ism is considered as a violent orthodox trend within Islam. They closely follow so called Imam Ibne-Tamyyah and Mullah Mohmmad ibne Abdul-Wahab of Najad, Saudi Arbia. They have great affection for Yazid bin Muaavia, who decapitated Imam Hussein (AS) and paraded grand-daughters of the Prophet (SAWAW) in the Bazars and courts of Iraq and Syria. According to a fatwa by Grand Madrassa of Deoband (India), it is quite appropriate to call Yazid as Ameer-al-Momineen and Rahma-tul-lah Ho Aleihe (Blessings from Allah).

Why Graves of the Lovers of The Prophet Desecrated?

The purpose is to wipe out physical presence of the Islamic heritage so that Muslims forget real teachings of the Prophet (SAWAW), making them an easy prey for brain washing and turning them into Al-Qaida, Al-Nusra and Taliban type terrorists, who are ready to kill anybody who does not agree with them. Takfiris  consider disagreement with them an act of heresy, and anybody committing heresy is heretic (Kaafir) and thus condemnable to death.

(The author has greatly benefited from a recent Urdu article appearing in this blog on this topic and is highly obliged.)