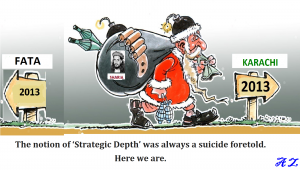 I write this as a memoriam to those who have lost their lives to the reprehensible acts of terrorism. I write this in compassion with the numerous families who have lost dear ones and bread winners as a result of the inability of the Pakistani state to save them from the clutches of the extremists, a state despoiled by its rulers and one that nurtured the birth and growth of terrorism. Pakistan is a nation in bondage. I write to express my horror and anger with the continued state of anarchy reigning in our land. Al Qaeda, TTP, and LeJ, together, have killed more than fifty thousand Pakistanis. Together, they have seemed capable of attacking and have attacked whatever has attracted their ire. Sadly, there has been highly inadequate, if any, response on the part of the government and the nation. We have been fed with rhetoric, denials, and falsehood. We have seen charlatans in action with much ado about nothing. We have been inundated on several occasions with assurances about our safety. All these evaporate in the heat each time any component of this group unleashes its arsenal of terror. While the army is still mired in its misplaced ideology, ruling politicians only distinguish themselves from one another through their excess of discreet manipulation and their opportunistic fascination with power. In their unbridled desire to ensure the perpetuation of their rules, Sharifs and Zardari have both sought ‘arrangements’ with the extremists. Where does that leave us?

While LeJ has always spelt terror for Shias and minorities, up to not very long ago, to most Pakistanis the above assemblage of extremists –while capable of unleashing an act of terror from time to time- connoted terror and anguish only possible in the far Northern reaches of Pakistan. However, this myth now stands shattered as the reality of a boundary-less inferno has begun to dawn. Having successfully terrorised most of the Northern Pakistan, these extremists have now gained a strong foothold in Karachi, the largest city and the economic hub of Pakistan, making it stupid to ascribe an artificial boundary to their dastardly activities along either geographic or sectarian line. It is time for all Pakistanis to accept the burden of this national shame and the enormous severity of its proportions.

In 2000’s Waziristan became the arrowhead of the combustive process threatening to tear Pakistan apart. Al Qaeda sponsored TTP, an organization formed principally to maim, destroy or conquer the Pakistani nation. Al Qaeda and TTP ideologues are avowed enemies of democracy and modern education and promise that this war would continue for long “if the political and educational system in Pakistan is not changed”. They seek to implement medieval type of education and political order in Pakistan, akin to what existed in Afghanistan during the Taliban era.

These extremists are a flourishing side-shoot of Pakistan’s jihad in Afghanistan and Kashmir. Pakistan’s social/political/economic iniquities, appalling illiteracy, ubiquitous poverty, and its people’s disillusionment with the status quo also afford a prolific bed to grow extremism. It has been a disaster in the making for many years now. Al-Qaeda and its cohorts have cloaked their sick ideology in the garb of Islam to foment anguish on a country that was created in the name of Islam. The last couple of years have borne ample testimony to the mounting failure of the state. Another dimension of unabashed terrorism was introduced in Pakistan with the recent pronouncements by Taliban, vowing to stop ANP, MQM, and PPP from participating in the electoral process. That other political parties chose to condone this situation is downright shameful. The threats of the TTP are now being implemented with an unimaginable ferocity. However, Karachi and Peshawar are no islands and soon we will witness even more telling showpieces of this brutality inflicted on the rest of Pakistan. Punjab too will get its due, later if not sooner. Those who deny this are either self-seeking or stupid or are with the extremists.

Only in the last three days there have been over a dozen of bomb blasts across Pakistan –killing scores of people and injuring many more- to impede the electoral campaigns of candidates and parties these activists don’t approve of. The only reason Punjab has not seen any such incident is because these extremists approve of the two parties leading the race in Punjab. While the conglomeration of these terrorist groups has accounted for killing tens of thousands of people in Pakistan in the past ten years, the recent attacks have resoundingly underscored the point that nobody and nowhere in Pakistan is safe from these monsters. Almost every day we have several bomb blasts in Pakistan all caused by TTP and its cohorts. Right-wing politicians are using these extremists as political hit points to win votes instead of tackling them so the people can live freely. Some politicians don’t want extremists to go away because they benefit from these extremists politically while innocent people continue to be killed day in and day out in Pakistan. The fight is not for the government alone. The fight is for all Pakistanis. But the government and the politicians have to be able to show the leadership in tackling them. Luckily, ordinary Pakistanis are peaceful and law abiding people who want development and progress in their country and not war.

To say the least, the submissive and tepid reaction of the Pakistani Government, ECP, and the right-wing parties to the latest round of violence unleashed on the electorate by the extremists has been irksome and generates a sour taste in the mouth. The subdued and belated reaction of PMLN and PTI is far from reassuring and speaks volumes about the hopelessness of the current state of insecurity in Pakistan. Very simply, these extremists have exposed the hypocrisy in the underbelly of our socio-political order.

The signs are ominous and the message frightening. Pakistan is at war. A nation at war is a nation in turmoil; it is one lurching from one catastrophe to another. A nation at war is a nation that knows no peace, and lives in confusion. Such is the sad tale of present day Pakistan. This war commenced the day the Pakistani state started cultivating extremists. Pakistan has been in denial of the reality of this war. However, the Pakistani people would benefit better from accepting the fact of our odyssey with this internal war. The wars between nations are fought along a mostly conventional line with standing armed forces. However, this internal war with the extremists has been completely unconventional and barbaric, steeped in the psychotic principles of brutality practised by the brainwashed fanatics of the monolithic era of the Taliban in Afghanistan and now followed by the Islamist fanatics from Pakistan to Middle East and Africa. This places Pakistan on a distinguished roll call of the countries reeling under the terror wreaked by frenzied religious psychotics. The stigmata of war abounds. Tens of thousands have been killed. Millions have been displaced. Families are mourning and licking wounds and institutions are paralyzed. In a large part of the country, including its largest city, citizens are living under an atmosphere of fear and apprehension. The land reeks of terror, devastation, and agony.

The only hope to stave off a total disaster is for all of us to feel and act with purpose as one nation and not an agglomeration of ethnic groups, sectarian divisions, or military and civilians. For once in the annals of this country, the army should admit that it is faced with something beyond its control and needs to enlist mass support all over the country in order to be able to combat this menace.  If that happens, it may still turn out to be the nemesis that may yet liberate the Pakistani nation from the psychosis of an elusive ideology. This is the only hope for us to ensure that those who have perished at the hands of these monsters have not died in vain. A forlorn hope, but still a hope worth fighting for.