Home  »  Original Articles   »   Grotesque Insensitivity: A face of Neo-Nazism in Pakistan? – by A Z 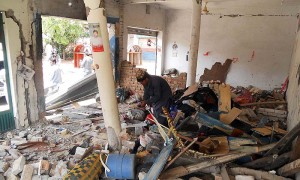 I am shocked by a lack of sensitivity in the election campaign to manifestations of terrorism, instigation of religious hatred, and apparent displays of Neo-Nazism. The extremists have exploded twelve bombs during the last twenty four hours to thwart the candidates or the parties they do not like from taking part in the electoral process. If it had happened in the US or Turkey or any other normal country the entire population would be up against the undemocratic forces. But all we see in Pakistan is a grotesque insensitivity to what is happening, except by those who are directly affected. It seems that the extremists have triumphed in desensitizing the population to their atrocities as the tragedy is growing beyond imagination. We know that at the grassroots level the religious fundamentalism which haunts not only Islam but also any other religious and philosophical belief, as well as radicalism can be cured only with democracy. Compromising democracy to radicalism, as evidenced in Nazi Germany, extinguishes that hope. So in a nutshell,  the desensitizing of disconnected masses and the politicians succumbing to the temptation of opportunistic alliances with fanatics strike one as latest ramifications of our inability to identify multiple risk situations as a result of our patronizing the jihadists.

We can only rejoice in the people of Pakistan participating in democratic processes as long as they are legitimate, moderate, and agreeable and when the democratic venues are wide open to all the citizens of the country. However, what elections are these when the democratic rights and freedoms, which are the very essence of a democracy, are being denied to many by using the extremist acts of terrorism? The attitude and tactics of some marginal radical Islamist groups are clearly an attempt to strip many Pakistanis of their right to participate in government and govern themselves. These elections defeat the notions rooted in the hope that opening up competitive democratic venues to the highest extent will force even the most radical groups to grow more moderate, rational, and realistic in order to secure more support from the public. To the contrary, that the candidates of many mainstream parties are wooing the extremists either for votes or security in their campaign remarkably facilitates the infiltration of extremists in the mainstream politics, thus reducing these elections to an exercise in boosting the impact of radical components in the mainstream society in Pakistan.

Going by numerous world examples -including the Germany of 1930’s- managing to block the democratic venues, these fanatics will feel further empowered and will grow more and more radical. As the past five years of democracy have evinced beyond mistake, the sustainability of the stability and a regime that is incapable of confronting the extremism remain quite dubious.  Pakistan is not Syria, where the anti-democratic President Bashar al-Assad regime’s trying to eliminate the Syrian people’s demands for democracy and freedoms through violent and oppressive methods instead of reforming itself in line with these legitimate demands has created a fertile ground for extremism and radicals. Instead, in Pakistan these are the misplaced ideological notions of the State and the Army and their cultivation of Islamist militants over a long period of time that are singularly accountable for the boost in radicalization of this once moderate society. Even then, when the incidents of terrorism first broke out in the country in early 2000’s, if the state had revised its priorities and addressed extremism we would not have lost 50,000 lives and the most of the country outside Punjab would not have been reduced to a lawless mess. Little did we realize that extremist ideologues do no one’s bidding forever and also that though these groups may seem manageable one at a time, once they start to cumulate (as we have seen) their potential for destabilization increases to unmanageable proportions. We are reaping the dividends of justifying certain terrorists while condemning others, turning suicide bombers into glorified martyrs, and teaching bomb making skills to the civilians.

The previous two governments have both been an abject failure in dealing with the menace of extremist violence in the country. Pervez Musharaf’s approach was an epitome of duplicity as he failed to renounce the army’s ‘strategic assets’ for the sake of his alliance with the NATO’s ‘war on terror’. Thus his perceived allegiance to the West hardened the attitudes at home while he showed no inclination to aim at the roots of extremism. The PPP’s inept government never showed any willingness or ability to combat radicals. Both these reigns have brewed a disaster by sanctioning extremism, as a result of which the extremists had the tools to grow the next generation of terrorists that we now see in operation.

So, while at first the comparison may seem overly alarming, a thoughtful analysis does establish the similarity of the situation with the pre-Nazi Germany. There has been an erosion of people’s faith in government. Their confidence in public institutions has declined. National trust in bureaucracy including the police force has collapsed. The integrity and professionalism of civil servants are not trusted. The army pursues its own agenda and –whether loved or hated- is widely suspected of intrigues by its countrymen. In the midst of all this chaos the country is beset with an ecosystem conducive to creating terrorism rooted in hate, watered in indoctrination, harvested in instability, and then replanted in the next generation.